Given how many of the villains were dispatched in the last book, it should come as no surprise to find that Elisabeth and Kaito finish off her task by the end of this book. The twelve villains she was ordered by the Church to destroy are, more or less, destroyed. Of course, that means that it’s her turn to be executed next. And therefore this is the final volume. Bye, everyone!… wait, no, of course it isn’t. There’s always an out, and the author is now describing the book as the end of the first arc. But what do you do when you’ve killed off the bad guys? Simple, have ma new bad guy for everyone to fear, twice as mean and terrifying, and set Elisabeth out to destroy him! Of course, there is one slight problem, which is who the villain actually is. (It should not be hard to figure this out.) It’s a very clever and also very foolish plot. 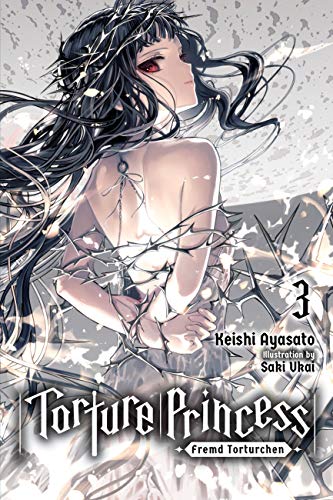 This book takes place in the capitol, and as such the cast expands greatly, though really there’s only one name we need to remember. The various knights and paladins of the church are doing their best, but in the end this is something that mercy and compassion are a bad fit for. Izabella in particular is so pure and shiny that she no doubt will be a powerful antagonist in future volumes (she’s the name to remember). In case you were worried that there would not be descriptions of horrific graphical body horror, torture and fates worse than death, fear not, they’re here in abundance – one featuring a children’s theater was particularly horrible. But then you get a fantastic line of dialogue, or an evocative description, or even just Elisabeth briefly turning into Teru from Dengeki Daisy and demanding Kaito go bald, there’s always a new element to remind you why you’re reading this series. (If you are reading this series just for the gore, good for you, and also you may want to visit some other blog.)

And then there’s Hina, who is only in one or two scenes in the book, but they’re so memorable they threaten to overshadow everything else. (That said, props to “The Butcher”, who remains ridiculous in the extreme.) Still in a coma for the majority of the book, she literally dive bombs into the final battle, declaring her love for Kaito as loud as a ball-jointed doll possibly can, and their reunion is actually really sweet. What follows is also the funniest point of the book, where Hina says she loves him even though they can’t have kids, and Elisabeth explains how they CAN have kids – even if the act she’s describing makes her blush. As I said in the other reviews, fans of Rem from Re: ZERO may as well start reading this, because you’re not getting more of her in the main series right now and this Rem actually gets the guy.

And so, at the end of the book, Elisabeth sets out to execute this new villain, Kaito and Hina are reunited and possibly making babies (though I doubt it, honestly), and Torture Princess remains a fantastic read, despite all the gore and torture. For those with strong stomachs, absolutely recommended.

The first thing that threw me off about this second volume of Torture Princess was seeing the main antagonists get whittled down so fast. We’re given a list of about twelve in the first book, which deals with taking out the most dangerous one (though for Vlad fans, an echo of his soul is left behind to provide considerable plot points in this book). I had assumed that the next few books would have us going through the list one by one. Imagine my surprise a seeing the main antagonist here, the Grand King, using four or five different villains with her mind control, all of whom get dispatched in some way or another by our heroes. Oh, and they also take out another one at the start. Isn’t that going too fast? What will you do if you run out of bad guys? Actually, the cliffhanger ending to this book suggests what might happen. For the moment, however, let’s concern ourselves with the Grand King, a woman who doesn’t like Elisabeth but sure loves torture. 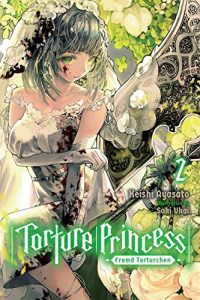 Last time we focused on how weak Kaito was compared to his Torture Princess benefactor and his Ball-Jointed Doll Maid who loves him. He is aware of this, so spends much of this book trying to gain more power of his own that he can use to protect the few things in this new world that don’t disgust him. He’ll need that power, too: the Grand King has sealed off Elisabeth’s powers and she is incapacitated for much of the book, and the Grand King is also leading an army of mind-controlled slaves to go to Elisabeth’s castle and kill everyone. Sure, Hina can take out a lot of them, but there’s only so much she can do on her own. No, Kaito needs more power. Fortunately, he doesn’t have to look far to figure out how to get it, he just has to do what he’s proven to be best at: suffer, get tortured, and bleed. A lot.

Again, the big drawback in this book is also its biggest draw: the torture. It’s cartoonish in nature, particularly when you get the descriptions of innocent humans with innards everywhere and insanely eating their own stomachs, etc. Fortunately, we actually manage to save one or two people here, though I won’t be surprised if in a book or two Kaito finds out the boy and girl he saved turn out to be used in the new leather coat he just bought or something grotesque. The strength of the book likes both in its grand guignol tone and characters. No one is shy and repressed in this book – Kaito comes closest, but after what he does towards the end of the book you end up both impressed and also appalled. His relationship with Hina reminded me of a darker turn on Subaru and Rem: appropriate, as like Rem in the current Re: Zero arc, Hina ends up in a magical plot coma, which is likely for the best, as her and Kaito’s story comes to a very satisfying conclusion here in Book 2 of about 11, so no doubt we need to figure out where we go from here.

Again, this is a book only for those who can tolerate a LOT of graphic violence – it’s the entire plot. For those who can, though, Torture Princess still proves surprisingly resilient. To my continued surprise, I’ll be reading the next one.

I do try not to be glib in my reviews too often, but I will admit it was tempting to have my entire review of this volume be “Loved the princess, hated the torture”. Honestly, it was a surprise to many people that I started this at all, given my wariness of overly dark and bloody titles. But I was on one of my “read the first volume of everything” kicks, so I worked my way through it. It was difficult at times, I will admit. The torture is no lie, and this isn’t even the pointless “torture them to get information” that you see in other, more annoying works. This is torture for the sake of gore, torture porn. Fortunately, the book also has three very distinct, likeable leads with expressive character voices and interesting through processes. I liked the way they went, and I want to see more of them. That said, it’s hard not to read this and think “the author wanted to write pages of torture description, so wrote a book around it”. 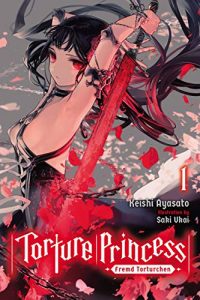 Kaito is a young man who has suffered at the hands of his abusive father his entire life, and finally is killed by said father. However, he ends up being transported to the land of the Torture Princess, Elisabeth Le Fanu. She brought him there to be her servant, and help (or at least watch) as she defeats thirteen demons and the people who have sold their souls to said demons. The demons enjoy torture and despair, and (seemingly) so does Elisabeth, so there’s an awful lot of it going on, and for a while the somewhat stoic Kaito is simply going with the flow. After a while, they also gain a robot maid, Hina (OK, a ball-jointed doll who is sentient maid, but for all intends and purposes she functions as a robot maid) with a devotion to Kaito that borders on the obsessive… well, OK, has moved into the obsessive and set up a knickknack shop there. Can they stop those contracted with demons from torturing innocents? Well, no. But they can at least punish them after the fact.

I will admit, I found Elisabeth, Kaito and Hina a lot of fun. Despite her name, Elisabeth is not a vampire, but she shares some of the same character traits, and the relationship between her and Kaito reminded me at times of Shinobu and Araragi from the Monogatari series. Kaito is snarky but not too much so, and most of this first book is seeing him regain a desire to actually find happiness and a purpose in life. And cliched as Hina is, she’s also hilarious and fun… and also provides the heart of the book, right near the end. It’s a good solid basis for a series. That said, dear sweet merciful Christ, after a while you will start flipping pages as you read about people lying in various bits, or having limbs chopped off, or being staked by demon crows, or… it almost went beyond exhausting to boring. It fits the florid Elisabeth’s Grand Guignol style, but that does mean that this is a book I can recommend only to the strong of stomach.