By Tatsuya Endo. Released in Japan by Shueisha, serialization ongoing in the online magazine Shonen Jump +. Released in North America by Shueisha on the Manga PLUS platform. Translated by Colin Milliken.

Over the last few years, North America and Japan have been trying to do something about piracy in various different ways, one of which has been simulpublishing. Putting out chapters at the same time as they’re released in Japan, for either a nominal charge, a yearly fee, or just plain for free. This means that we’re not merely getting popular new series from Japan after they’ve taken off, but we’re also getting potential hits – or bombs – as they debut. Shueisha, a few months ago, stuck their feet in the water with their Manga PLUS app/website, which gives readers a pile of series to read for free, from older titles like Naruto and Assassination Classroom to the newest chapters of current Jump series. Most of these are, I assume, done in conjunction with Viz Media. But they also had a bunch of debuts that run either in Jump Square or in Jump +, their online magazine, that are translated by the Media Do people. And none have quite hit the manga readership quite as hard or fast as Spy x Family. 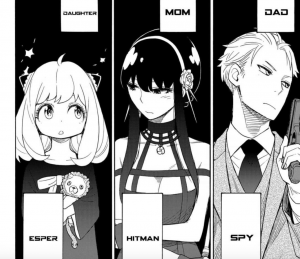 Lloyd (aka Twilight) is a brilliant, if somewhat emotionally stoic, young spy, who is known for success. He is asked by his superiors to infiltrate a private school, the only location where a reclusive enemy is known to appear, and take him out. Unfortunately, the school has rigorous rules that are set in place, so in order to infiltrate, he’ll need a wife and child. The child is Anya, who he finds at an orphanage and snaps up when he sees she can read and write. The wife is Yoru, an office lady who is at that age where she really needs to have a man in her life (mostly as the Berlin Wall-esque world they’re living in tends to arrest unmarried older women as security risks). Together they can infiltrate the school. Oh, yes, there are a few more things. Yoru is actually Thorn Princess, a powerful hitman/assassin. And Anya is an esper, and can read the thoughts of everyone around her. The key to the series is that Lloyd and Yoru do not know each other’s secrets, and neither one of them know Anya’s. Anya can read minds, so knows both their secrets, but that’s OK, as they’re SO COOL!

If you’re wondering why this series has gotten so much buzz after a mere four chapters, well, it does nearly everything right. The characters are cool yet flawed, and each also have the opportunity to be funny. The future plotline will, I hope, have Lloyd and Yoru falling for each other for real, and that will be terrific, because they’re perfect for each other. And we all await with baited breath the moment that they find out about each other (though really, Yoru should likely have guessed when she was proposed to using a grenade pin as a ring). The series runs on cool and funny, and carries both off, from the sleek action moves when we see Yoru killing any number of bad guys, running after purse snatchers, or even judo flipping an enraged bull, to the ‘this is ridiculous’ savvy of Lloyd and Yoru packing multiple different outfits just in case their clothing is damaged and they have to change. And then there’s Anya, who is adorable and cute to the nth degree, and you just want to pick her up and hug her forever. Seeing Lloyd trying to open up to her, and her attempts to manipulate things so that he doesn’t abandon her like everyone else has (being a young esper is not a fun life) is incredibly sweet.

To sum up, this is a well-written, cool and hilarious series that you can read legally for free. And it’s only four chapters long (the first chapter is about 85 pages, so there’s a lot of content here), so you aren’t trying to catch up but are getting in on the ground floor. How long will it last? Well, I suspect that’s up to Japanese readers. I will say that it’s currently the 6th most popular series on the Manga PLUS site. Which, given it’s up against most of the current and past Shonen Jump lineup, is quite a feat. Go read it and make it even more popular.