By Michio Murakawa, originally written by Yoshinobu Nishizaki. Based on the series created by Leiji Matsumoto. Released in Japan as “Uchuu Senkan Yamato 2199” by Kadokawa Shoten, serialization ongoing in the magazine Newtype Ace. Released in North America by Dark Horse Comics. Translated by Zack Davisson.

I was very much of two minds about this modern reboot of the classic 70s space opera. On the one hand, it does everything that you’d want to have done in a retelling updating Matsumoto to the 21st century. The character development gains greater depth, there’s more room for the story to breathe, there are significant female characters (and some of them aren’t even blondes!). It’s pretty good. On the other hand, it does everything you’d expect to have done in a retelling as well. The relationship between Mori and Kodai reminds me of Ranma and Akane at times, and Mori reads far more like a tsundere than I’d really want. There’s also a lot of really gratuitous fanservice, including many, many ass shots of the female cast, and one bizarre moment when they go through warp that is supposed to show it’s a mental experience as well but also mostly shows off naked breasts for the crew. So it’s pretty good, but there are issues. 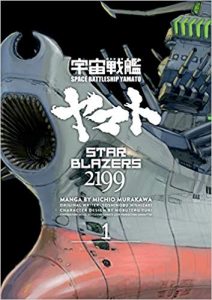 The basic plot is the same as the original. The Earth is under attack from the alien Gamilans, who have basically destroyed Earth. Fortunately another alien race, the Iscander, are offering hope for the ever-popular in SF faster-than-light drive. The trouble is getting there… and that’s why we have the Yamato and its motley crew (a bit less motley in this version as it’s not being drawn by Matsumoto). We’ve got Admiral Okita, who is as good as ever as being “top Naval commander”. We’ve got crack pilot Susumu Kodai and his best friend Daisuke Shima. We’ve got Yuki Mori, who gets off to a bad start with Kodai but also has “love interest” written all over her. But there’s also a bunch of new characters, most of the notable ones women. Niimi seems like “the smart one”, the nurse Harada, who serves as a combination of comedy relief, fanservice, and romantic shipper. There’s Yamamoto, another hotshot pilot sort. And there’s also the robot, though as of yet he’s not as fun as the original.

There are lots of nice shots of space and the Yamato traveling through it, though we don’t get pages and pages of it the way the original series did. Those pages are taken up by plot and characterization, and it’s up to the reader to determine if they make the remake better or worse. I’d say “different”. Certainly I do feel like continuing the story, and I love seeing these characters all over again. It just lacks the space opera grandeur of the original – it’s not as operatic as Matsumoto at his best. But it’s also a lot longer than the original manga, so we’ll see what direction it decides to take its story in the future.

There’s been a wonderful glut lately of both classic 70s manga and also Leiji Matsumoto’s works (frequently those are the same thing). We got Captain Harlock and Queen Emeraldas, and we’re getting the modern rewrite of Harlock. And now we’re getting the original Space Battleship Yamato, with the modern version of that coming out this summer. No sign of a rescue of Galaxy Express 999, but I suspect that’s more complicated. In the meantime, it’s time for more of the best of what Matsumoto has to offer as a manga artist… and also the worst, as Matsumoto is not perfect, nor is this collection. But it does give you exactly what the title promises: Space, and lots of it. Impressive battleships sailing through space. And, wonder of wonders, and ending that, although rushed, actually wraps up the series! Unfortunately, that ending is 1/3 through the book, and the actual ending is the open non-ending we’ve come to expect from Matsumoto. 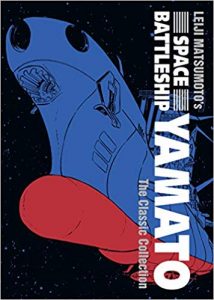 For those who are unaware, Yamato was conceived as an anime, and Matsumoto was brought into it later on in development. He quickly made it his own, though, and the manga began about a month after the anime started. (The anime was also “adapted” into Star Blazers, for those with long memories…) The premise has aliens dropping radioactive bombs on Earth, and the only ones who can stop them is the Earth Fleet… which isn’t doing so hot. Fortunately, they have a secret battleship, Yamato, that can battle the Gamilans, as well as try to seek aid from mysterious blonde-haired, gorgeous, and mostly dead alien babes. (This isn’t Harlock, so the gorgeous aliens aren’t evil here.) Together with trusted old Captain Okita, young and impetuous yet destined for greatness Susumu Kodai, and only woman in the Earth Fleet Yuki Mori, they will defeat the Gamilans… and then have to escape Earth after it grows smug and proud in the aftermath.

The main reason to get this manga, in my opinion, are the many pages of the expanses of space. Each chapter features at least 5-6 pages of just space, planets, and stars, and it’s here to show off the wonder of it all. Characterization, on the other hand, fares less well, with everyone pretty much matching to a type. There’s a sense this is trying to adapt an anime rather than be its own thing (which may be true). In addition, I have to say it, I’m not a fan of the way Matsumoto uses humor. His leads tend to be the brooding, serious types, so he balances it out by having the dumbest Milton Berle-style comedy, complete with drunken vets butchering pigs, etc. An exception to this is the robot Analyzer, who would be an R2-D2 ripoff if this weren’t a good three years before Star Wars. His snarky comments did spark amusement from me, especially when they verged on verbal abuse.

This doesn’t really hit the heights that Harlock and Emeraldas do; it tries to be majestic, but can’t quite make it. But it’s entertaining as a space opera, and I do love those expanses of darkness with only stars. If you enjoy Matsumoto, give this a try.