something's wrong with us

By Natsumi Ando. Released in Japan as “Watashitachi wa Douka Shiteiru” by Kodansha, serialization ongoing in the magazine Be Love. Released in North America by Kodansha Comics. Translated by Sawa Matsueda Savage.

One of the first things I noticed when I began to heavily overanalyze manga artists is that shoujo artists started out in the magazines for younger readers – the Margaret, Nakayoshi and Hana to Yume types – and then, after many years of long and faithful service, graduated to the magazines for adult women – You, Be Love, and Silky. I used to wonder if it was like being kicked upstairs into the House of Lords. I suspect it may be more that the josei magazines come out with far less frequency and are thus easier to handle on a schedule basis. The reason for this drawn out prologue is that this new series is by Natsumi Ando, famous – or infamous – for her shoujo potboilers that ran in Nakayoshi over the years, such as Kitchen Princess and Arisa. And now she’s “graduated” and started a series for Be Love, which seems to be doing quite well given it’s 11 volumes and counting over there. 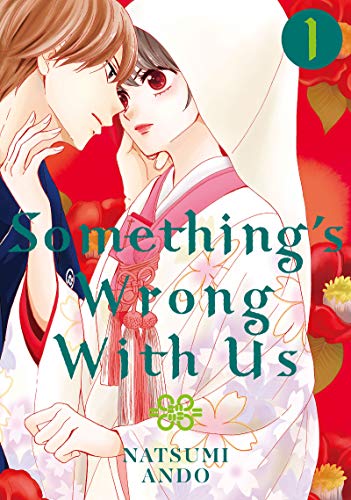 Nao is a happy young child, who adores her mother, a sweetsmaker who has take a job at a prestigious sweets shop. She’s shy, but makes friends with the cute young boy who’s the heir to the business. Then there’s a murder, which Nao witnesses, and the very same cute young boy accuses her mother of the murder. Fast forward to Nao at age 21, still dealing with PTSD from the murder, her mother having died in custody meaning Nao can’t hold a job, suddenly finding work at the very same sweets shop, whose young heir is now gorgeous… and about to get married. That said, the family seems to be as cruel and overdramatic as ever, and Tsubaki is no exception. Can Nao find out why her mother was framed all those years ago? And can she do it while being used as a pawn… and possibly fall in love?

I will admit that I tend to start off enthusiastically reading Ando series and then gradually lose interest, and I’m not sure if this will be the same. It’s a very good start, though. Ando has used dark, dramatic arcs before, but rarely from the start, and Nao being 21 rather than a teenager helps lend heft to the murder accusation and aftermath plot. Tsubaki seems like the sort of asshole who will gradually be shown to have a nice side deep down that we see in many of these series, but so far he’s hiding it pretty well, and he has a MUCH harder hurdle to clear than simply “I am a rude jerk” to win Nao’s heart. I am expecting, given the nature of the series, that his accusation of Nao’s mother is not all that it seems, and in fact the entire family looks like they wanted a scapegoat… and may want one again. Given that “like accused criminal, like accused criminal’s child” is a thing in Japan, I am in fact expecting it soon.

I haven’t mentioned the sweets, for which I apologize. This book is also all about sweets, and the endnotes are mostly about the nature of them – these are Japanese sweets, not Western. They do help relieve a bit of the darkness that this series exhibits. If you liked Ando’s shoujo drama, her josei drama should definitely appeal. As for me, we shall see how long I last with this one.