By Honda. Released in Japan as “Gaikotsu Shotenin Honda-san” by Media Factory, serialized in the magazine Gene Pixiv. Released in North America by Yen Press. Translated by Amanda Haley.

I had (shocking, I know) not actually seen the anime that is based off of this manga and took the internet by storm a while back. As such, I was a bit surprised to find that the skull face is actually irrelevant. No, this is not about a walking skeleton who works in a bookstore. The protagonist is the author, and the skull face is a mask that hides their identity – all the employees of the bookstore have different types of masks, for exactly the same reason. When you’re basing things on a true story, but don’t want to actually upset any of your colleagues, this is a good way to go about it. Moreover, it focuses the reader’s attention on the faces of the customers, which are gloriously well-done and expressive. No, instead of walking skeletons we just have life at a large bookstore in Japan, and insight into what’s going on behind the scenes. That does not mean this title is not fascinating, because it is. 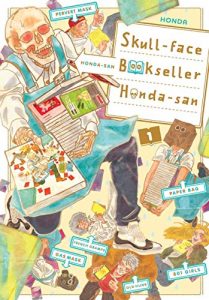 Actually, the large bookstore also surprised me. I’ve seen manga about sleepy bookstores where a customer walks in once in a while, and the huge chain bookstore is usually the villain in those titles, trying to crush the mom and pop store and its individuality. But no, this manga is about a LARGE bookstore and its MANY employees – in fact, just the employees of the manga department of the store. It’s not made clear where it is, but given the large number of Westerners who wander through it, it has to be somewhere in Tokyo. Most of the time we see Honda-san at the front counter, helping customers find the manga they’re looking for, no matter how embarrassing, confusing, or impossible the request is. It doesn’t help that, as I mentioned earlier, many of the customers are foreigners with little concept of Japanese, and Honda-san’s English is also iffy. Still, service is the important thing, and we can’t leave a customer unhappy – though they may change their objective a bit.

Among the ‘types’ noted on the cover of the manga are ‘801 girls’, and a large chunk of the start of the book is devoted to BL manga and those searching for it. Sometimes they’re at sea, such as a dad whose daughter has asked for Gintama BL doujinshi, something Honda-san has to tell him isn’t sold at this bookstore. Sometimes you get a feeling of being “the Ugly American” in a sense, such as Honda-san watching the very loud American BL fans gushing about the types they like in the middle of the store. (That said, there’s no judgment given, and Honda-san seems to admire their forthrightness.) We do also meet several other employees, who tend to run the gamut from busy and harried to harried and busy, but the emphasis here, apart from Honda-san, is on the customers. (One exception is the class Honda-san has to take on customer service, where he meets a gorgeous young woman from another store who has trouble smiling for work – it’s amusing.)

I’ll be honest, this almost reads like a travel documentary about the Book Buyers of Shinjuku or something. It can be a bit exhausting (Honda-san reminds you time and again how painfully busy and overworked they are), but the stories and faces of the people involved are worth it. Even if they come in looking for shoujo manga and end up buying Berserk.