saving 80000 gold in another world

By FUNA and Touzai. Released in Japan by Kodansha. Released in North America by Sol Press. Translated by Lukas Ruplys.

This is the third of FUNA’s series to be brought over to the West, but it was apparently the first one serialized (though they do say this and Potions debuted almost at the same time). Having now read all three, there’s no question why Make My Abilities Average! got the attention and the forthcoming anime adaptation: it’s the best of then. Potions gets by on Kaoru being somewhat terrifying rather than cute and plucky, and both it and MMAA have the heroines having to deal with situations where they’re dealing with permanently being in another world, even if they’re loaded up with ridiculous cheats. Mitsuha, though she appears to “die” and be reborn in a fantasy world, in fact has it the best of all of them. As a result, the danger level in this first book is fairly low, and it’s not as interesting as a result. That said, if you enjoy FUNA’s ridiculously OP heroines, there’s a lot to like here. 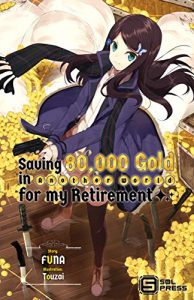 Mitsuha starts off the book pretty badly, to be honest. She’s not dead like Mile or Kaoru, but her parents and older brother are, leaving her alone and dealing with the fallout. One day at a lookout point, she’s attacked by some young creeps (she’s 18 but looks 12, in the best anime cliche tradition) and they accidentally push her off the edge onto the rocky cliffs below. She wakes up in a forest, and after walking herself to collapse finds herself in a rustic cabin… indeed, in a rustic world. Eventually she discovers that she can transport herself between this world and Japan, and, thanks to some friendly deus ex machinas who explain why she isn’t dead, she also can speak any language and has a healing factor. So what’s a young, recently orphaned young woman to do? Why, earn a pile of gold coins in the fantasy world, convert it over in Japan, and live a life of ease! Except she’s a FUNA heroine, so adventure and ridiculousness is bound to follow.

As with Mile, and especially Kaoru, there is a risk of Mitsuha coming off as uber-smug, especially when she’s doing things like bribing mercenaries to teach her how to use knives and guns, or showing off her general store with amazing inventions such as store-bought shampoo. (There’s also FAR more intrustive fourth-wall breaking in this book.) This being the case, I thought the best scene in the book is when she’s ingratiating herself with the local noble family, all of whom are taken in by her sob story (adapted for the fantasy world), and she gets carried away and calls the patriach “Father”… then starts to unconsciously cry. It’s a reminder that the author really does remember the character backstories, and this is a young woman who recently lost her entire family, who appeared to be pretty loving from what we hear (though the brother was a bit of an otaku). It’s a nice bit of grounding that helps you smile and nod when you see Mitsuha use dry ice and the power of FISH to wow everyone at a debutante ball.

This is my first Sol Press purchase. The translation was good, but the digital formatting was merely eh. They need to figure out how to make the interstitial pictures be one page on their own, rather than having text on the same page. That said, if you’re looking for silly heroines, and have run out of Make My Abilities Average!, this is a pretty good purchase.