By Yuka Tachibana and Yasuyuki Syuri. Released in Japan as “Seijo no Maryoku wa Bannou desu” by Kadokawa Books. Released in North America by Seven Seas. Translated by Julie Goniwich.

I’ve always – theoretically – had a soft spot for what Japan refers to as “slow life” light novels. They usually involve someone who has ridiculous powers and could theoretically be saving the world, but for one reason or another decides instead to be a farmer, or a pharmacist, or even a prisoner. There are a slew of these titles in Japan, and they’re starting to come out here as well, but so far I haven’t been as satisfied with what I’ve been getting. By the Grace of the Gods, a classic example of the genre, bored me to tears. It’s hard to hit that sweet spot that shows the protagonists doing what they want at their own pace and also keeping the audience’s interest. Fortunately, we may have a winner here. The Saint’s Magic Power Is Omnipotent features a women who, after being summoned, is almost immediately written off by the prince of the land. Fortunately, others can see her worth. Good thing too – she seems to be the savior after all. 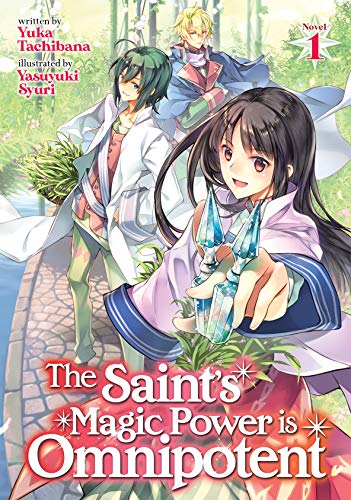 Sai is a harried, overworked office worker in her early 30s who is getting by on about four hours sleep a day. This changes when she and another girl are summoned to a fantasy world in order to help cleanse the land of monsters. Sadly, the crown price sees “cute teenage girl” and “30-ish OL with bags under her eyes and glasses” and promptly declares the other girl to be the Saint that will save them, leaving Sei to her own devices. After the rest of the king’s advisors beg Sei not to leave the country in a huff – after all, they haven’t proven she ISN’T the saint yet – she ends up getting a job making healing potions and medicine, something she finds very fulfilling. As she gradually adjusts to normal work hours and sleeping properly, her actual beauty starts to shine through (she even loses the glasses). What’s more, Sei’s medicine seems to be far more powerful than they should be.

I enjoyed this a great deal. Aside from the prince – who notably is talked about not not really seen at all – everyone in it is nice. Sei has a bit of “gosh, they can’t be in love with me” to her, but notably, this is dealt with by the end of the book, so doesn’t seem to be an ongoing plot point. Most of the book’s fun comes from seeing Sei’s medicine heal or cure people to ridiculous levels. It starts off with “gosh these wounds healed fast” and “her potions saved the Knight Commander from death” and only gets more ridiculous from there. (One niggle – Sei’s “stats” can be seen, as in an RPG. The reader constantly sees her magic power as ‘infinite’, but no one else seems to see this, so there’s a lot of people staring at her stats and wondering why she can do this. It’s frustrating.) The “slow life” bits are also fun, with Sei making friends, learning about her new world, and of course falling in love, though there may be more men falling for her in the future.

All this and no fanservice or creepiness. An excellent debut, and I want to read more as soon as possible.