restaurant to another world

By Junpei Inuzuka and Katsumi Enami. Released in Japan as “Isekai Shokudou” by Shufunotomosha. Released in North America by Seven Seas. Translated by Elliot Ryouga. Adapted by Nino Cipri.

This sat in my queue for a while, not because I don’t enjoy it, but because I know reviewing it will always be hard, as it’s 75% loving descriptions of food. We get rice burgers, French onion soup, Oyakodon, Peperoncino and potato chips, and trust me, they’re all described so that you immediately want to make the meal yourself. Sadly, there aren’t recipes included in these books the way you see with a lot of cooking manga (perhaps the manga version will add them?). In terms of the restaurant itself, the biggest development is that Aletta gets a raise, as she’s now been there for one year. That said, there’s a lot of development on the other side of the door in terms of worldbuilding. Indeed, we finally get the origin story for the doors, and it shows a tie between both worlds that is both surprising and obvious at the same time. Turns out it runs in the family. 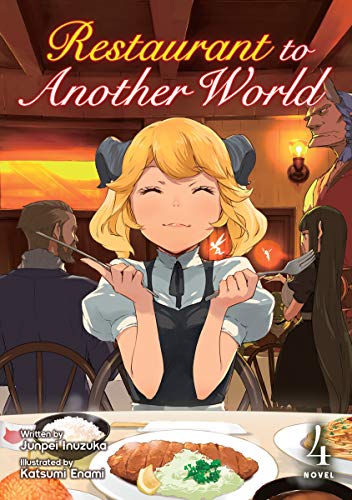 This isn’t to say that we don’t get glimpses of the future as well. One of the book’;s more annoying but tolerable habits is to show a character won over by something the restaurant is serving and think about how to create it in their world, followed by a caption talking about how in a hundred years’ time, their names would be legendary in terms of achieving the objective. The fantasy world may lack preservatives, but it’s making do, and finding ways to at least come close to things that the restaurant can serve. There’s also more discussion of half-elf prejudice – we’ve seen this discussed before, but here we get it starkly laid out, as by chance one girl in a village born to two half-elfs is a “changeling” – essentially meaning she develops in elf terms. This leads to her being abandoned by the village for being “slow”, when in reality it’s more she’s still a baby. Fortunately, she gets rescued and apprenticed.

The book jumps around more than usual – there’s several chapters with the previous generation at the restaurant, and the prologue and final chapters deal with the generation before that. It turns out that Yomi, one of the saviors of the world from ancient times, was essentially blown up into our dimension, and ended up being found by the current manager’s grandfather. Them marrying is what led to the restaurant and the special relationship it has with her old world. Her husband has passed on, but she’s still around, and shows up at the final chapter to give her grandson the “master key” – in essence, showing she trusts that he can handle everything going forward. It’s not a “I’m about to die” sort of scene, but reads more as a passing of the torch – indeed, she reads like a tough old grandma, and even meets up with one of her old compatriots, now also an old man.

So another solid entry in the series, though as noted you’d better love descriptions of food. Fans should be quite hungry – I mean, happy.

By Junpei Inuzuka and Katsumi Enami. Released in Japan as “Isekai Shokudou” by Shufunotomosha. Released in North America by Seven Seas. Translated by Elliot Ryouga. Adapted by Jude Wetherell.

We’re introduced to the third main cast member from the anime here. Kuro (who calls herself Black in her inner monologue, but they mean the same thing anyway) is an ancient legend now living, literally, on the moon because in her true form she causes people to drop dead around her. Fortunately, she can suppress it when she turns into an elf girl and can enter the restaurant, where she falls in love with the chicken curry and stays to become the restaurant’s second waitress. That said, much like the first two books, the staff don’t get much focus at all. The emphasis is on the diners – some old friends, some new – and the food they’re eating. We jump around a lot more here, sometimes confusingly (one chapter ends with an ancient warrior going to see his late lover, who seems to have the same name as our sweets-loving princess), but if you love reading about food, this remains the light novel for you. 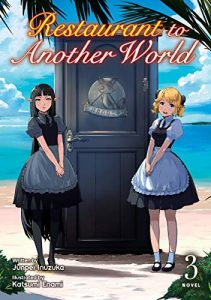 Indeed, sometimes the novel seems to actively avoid any conflict at all. The first and second volumes had a few arguments (usually about food), but there’s none of that here, as they’ve learned to simply avoid the people they know would cause friction. It’s especially obvious with Kuro, who once has an ancient Elven priestess come for food and completely not notice her, despite mentioning her fearsome and terrifying past earlier in the book. It was a bit frustrating to me till the end, when it became apparent that – much like her power of “death” – Kuro seems to be making it so that she’s unnoticed by all but the strongest folks – and they’re not saying anything. She was asked by “Red” – the dragon we’ve seen earlier – to essentially be security for the restaurant in case someone tries to kidnap the owner and take him back to the other world. So far she’s done her job very well, but it can lead to a certain… I want something exciting to happen, dammit!

Till then, there’s just getting excited about the food. We get a few interesting variants here. Birthday Cake comes up to celebrate a child’s not-quite-coming-of-age-but-close-enough, and we see the Master preparing BBQ for a Japanese festival he’s participating in (we do not actually see the festival). The sake-steamed clams sounded amazing. And oh yes, right near the end as the legendary warrior is experiencing the wonder of croquettes, we find that the Master and his father (who we also see, as several of these chapters take place “in the past”) may not be as completely unrelated to the fantasy world as previously expected. I liked the idea, very appropriate for a book like this, that since the master was not able to use, say, magic or swordfighting in modern-day Japan, that he was taught how to be a marvelous chef instead. You pass down what you can to teach your children.

We’ve seen a plethora of food-related manga and novels recently, but this one remains in the top tier for both descriptions of delicious food and also giving you enough characterization and plot to keep coming back for more even though it’s still a bit thin. A yummy read.