By Nobiru Kusunoki and Arico. Released in Japan as “Herscherik” by M Novels. Released in North America by J-Novel Club. Translated by Adam Seacord.

The second volume in this series pretty much picks up where the last one left off. There’s serious political intrigue. There’s tragic death and despair. There’s good old-fashioned sleuthing. And there is virtually none of the sort of thing that you’d expect in a reincarnation isekai – about the only thing that stands out is Herscherik briefly going all Marielle Clarac on us when he sees the titular knight and his former best friend (the first prince) angsting at each other and starts to ship them – though the text takes pains to tell us, over and over, that Ryoko was not a BL shipper per se. That, and the occasional scene where Hersch does something bad and Kuro yells at him, is the closest we get to humor in this series, which is far more concerned with showing us how HARD it is to change a corrupt world. Even when you discover the secret and stop the bad guys, you realize that there are bigger bad guys behind them who got away. 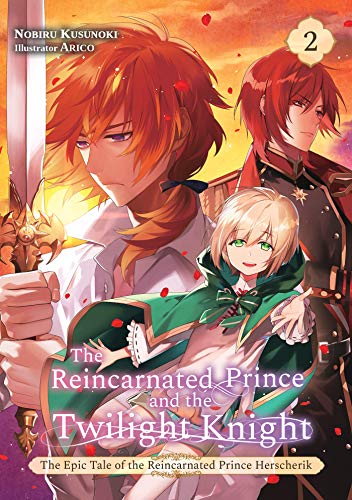 The titular Twilight Knight is that red-haired brooding man on the cover (OK, the one in the foreground, I clarify). Octavian is the 3rd son of the country’s most famous war general, and was easily the most talented of his children. Friends with the eldest prince, a lovely fiancee he adores, what could be better? Then his fiancee dies suddenly, and finding out why and how sends him spiraling into despair. Not, two years later, Herscherik is looking for a knight to protect him (every prince has one), but would rather not have a sycophant or someone only interested in his name. Octavian, who is trying out for the position as he’s being forced to by his family, seems like just the man. But can Hersch manage to awaken his spirit and get him to be the best knight he can? And can they stop the drug that killed his fiancee from making a comeback?

The majority of the plot, as you can see, is dealing with Herscherik as a 5-year-old 7th prince of the realm. But the most interesting stuff here may be on the Ryoko end of the equation. We get a few more glimpses of the life she had in Japan, and it’s clear that she was the type of employee who was overworked to death because she was competent enough to be given more. Herscherik is shaping up to be exactly the same. There’s also an oracle who is consulted at one point who not only gives our heroes the clue they need to solve the mystery, but also seems to be able to see that Hersch has the soul of a woman from another world inside him – something that is supposed to be impossible for this world. A far cry from the usual isekai “we summon heroes all the time” schtick. And Hersch is also starting to trust more people, which is helpful but also means more people are realizing he’s not your typical five-year-old boy.

So, as I noted, in the end our heroes win, sort of, but the main problem still exists. Which is good, as there are more volumes to come. For those who enjoy a good adventure series, this is right up your street.

By Nobiru Kusunoki and Arico. Released in Japan as “Herscherik” by M Novels. Released in North America by J-Novel Club. Translated by Adam Seacord.

It has to be said, after a year that seems to have been filled with nothing but Japanese office ladies dying and being reincarnated in various games, it was somewhat startling to realize that’s not what’s going on here, and that The Epic Tale of the Reincarnated Prince Herscherik (the series name overall) is simply a normal reincarnation isekai – albeit one where our hero is reincarnated as our hero. If I was to ask what the ‘gimmick’ is with this series, that would be one of the three points. The second would be that the hero’s adventures in this book take place from age 3 to age 5 years old. There may be a timeskip in later books (the series is a total of five volumes), but certainly not here, where the prince needs to learn to get things done while being an even smoller bean than Myne. Possibly most importantly, there is very little to no humor in this book. The kingdom is in danger from its corrupt officials, the king is powerless, and good people die. Herscherik is going to need all his OL skills. 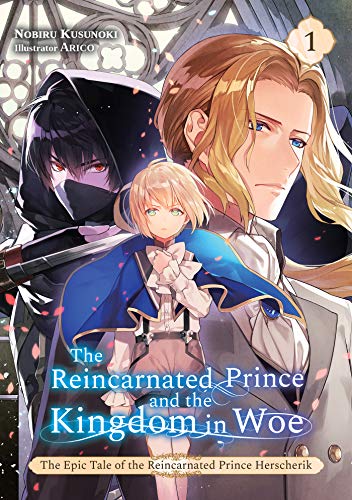 Unlike a lot of these sorts of ‘otaku lady in another world’ stories, the life in Japan plays a large role in the story, with Ryoko’s past life sometimes making Herscherik function almost the way Tanya von Degurechaff does, with Ryoko’s own thoughts sometimes seeming separate from Herscherik. Ryoko is a relatively successful office worker who specializes in oversight and checking to make sure everything balances. She is the eldest child, but isn’t married despite her younger sisters both having partners. But she’s reasonably happy, and has a love of games which makes her rush through the rain to get a preorder… which leads to the inevitably car accident that causes her death. There are flashbacks that show her interactions with her family, and we see what her funeral may have been like. It’s quite touching, and it’s also nice to see someone in a reincarnation isekai who got on well with their loved ones.

There is a LITTLE bit of humor in the book – I was amused at Herscherik noting how handsome he is, and then seeing the rest of the royal family, each of whom are far, far more gorgeous. That said, for the most part the book runs on intrigue and thriller, as our little prince rapidly realizes that his kingdom is going to be destroyed and that his father the King is too beaten down and cowed to do anything about it. (We get some scenes with the king, and he’s nice enough, but yeah, Herscherik is needed.) The prince may be only a few years old, but thanks to Ryoko’s knowledge he’s able to figure out who the bad guy is and who the bad guy’s minions are. We don’t take out the big bad here – this feels like a series that was entirely plotted out before it was started – but at least we get a minion humiliated and blackmailed. Oh yes, and Herscherik gets a butler-cum-assassin, who is exactly what you would expect an assassin-turned-butler to be like.

If watching Full House made your eyes roll at the precociousness of the Tanner kids, this may do the same. That said, Herscherik at least has Ryoko’s memories and life experience as an excuse. Other than that, though… this is simply well-written and gripping. Epic Tale fits it nicely.