redefining the meta at vrmmo academy

By Hayaken and Hika Akita. Released in Japan by Hobby Japan. Released in North America by Sol Press. Translated by Benjamin Daughety.

I have lost track of the number of times, in writing reviews of light novels, that I have said “I’m not a gamer, but…”. So many LNs these days are built about RPG builds, RPG worlds, RPG fights, and the like. Most of them try to make at least a token effort towards appealing to non-gamer fans. Sometimes, like with stat-heavy series like Reincarnated As a Slime or Spider So What, it’s a very token effort. But we may have run across a series that I think is impossible to read if you aren’t very familiar with gaming. While reading this first volume, pages and pages of text went by with my staring at my phone and blinking. “What the hell?”, I would say, as the heroes would go on about tanks and getting your HP to the right level to trigger some event or attack. Far from the first volume of a light novel, this feels like a group just took their RPG log and put it on the page. And not even the main log. This would be the side log with all the chatter. 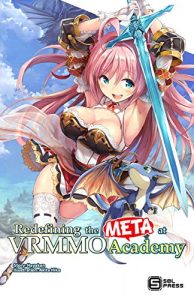 Our hero is Ren, who’s just arrived at a virtual high school that is entirely devoted to teaching game-obsessed students through the medium. Ren is already somewhat well-known for picking the lamest, weakest class in any game and finding ways to make it awesome. He’s done that here as well, as he’s a Symbologist, which has awful attack abilities and the support isn’t great either. He’s here because he promised his gaming pal Akira they’d go to high school together. But when they finally arrive, he’s startled to find that Akira, who played as a buff, burly dude, is actually a cute, busty girl! Together with her, the class president-ish Maeda, and extroverted “gal” Yuuna, they are here to level up, take out bosses, and also take classes when they have the time.

The series is… not without its good points. I was pleased to see that after the initial “Eeeeeeeh, Akira’s a girl?” reaction, Ren and Akira settled quickly into their old friendship (though he is not above taking advantage of her assets – he asks her to take the Sword Dancer class, which most girl gamers avoid as the costume is skimpy) and there’s no tension or fighting between them. When the four main characters aren’t gaming, the dialogue can be amusing and fun. Ren likes the female form, but does not openly perv on his companions or fall into them the way a typical shonen protagonist might. But man, 85% of this book is lines like “this class combines offensive and healing magic, but right now she can’t hit multiple enemies, and doesn’t have area-of-effect healing…” and I start to flip pages till I get to something actually happening.

If you’re a gamer who reads LNs, this is right up your alley, and the premise may interest you more than it does me. As for me, I liked the characters, but as long as they’re debuffing their hit points with MP sword equips, I think I’m going to have to pass.