rascal does not dream

By Hajime Kamoshida and Keji Mizoguchi. Released in Japan as “Seishun Buta Yarou wa Chibi Devil Kohai no Yume wo Minai” by Dengeki Bunko. Released in North America by Yen On. Translated by Andrew Cunningham.

This book had several hills to climb in order to win me over, to be honest. I enjoyed the romance in the first volume, and was not fond of it being torpedoed right off the bat in the cliffhanger. The heroine of this book, Tomoe, did not make all that good an impression on me in the first one. Time loop stories make me vaguely uncomfortable, hitting a certain level of “I get embarrassed reading this” in me. And fake dating stories also rub me the wrong way in actual books, though oddly I’m fine with it in fanfiction, mostly as it almost always leads to real dating. That said, it’s a testament to the writing skill of the author that I was able to enjoy the book regardless, and most of my objections stated above were put to rest fairly easily. (The one heroine per book thing is something I fear I will have to get used to.) 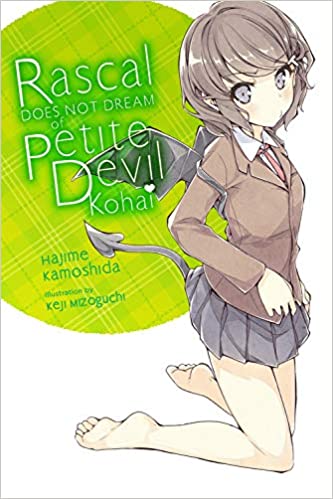 The time loop is helped by it only being relevant at the start and end of the book. Sakuta is caught in a loop of the same day… for three days, and then, when it breaks, he’s basically in the worst possible situation. This is due to the heroine of this book, Tomoe, who is not a literal devil but is a stand in for “Laplace’s Demon”. We saw her in book one kicking Sakuta’s butt (and getting kicked in the butt in return, something that Sakuta, being who he is, brings up over and over again in this book), and now she has a problem, one that she tried to get Sakuta to help with once the time loop breaks. In order to fend off the attention of another guy, they have to pretend to date for the rest of the semester. Of course, Sakuta is in love with Mai, which makes things just a bit difficult. And that’s not even getting into Tomoe hitting the “fanfiction” part of the trope and wanting to turn her fake dating real.

As with the first book, the main reason to read the series is Sakuta, who is both a very nice , upstanding guy and a completely terrible lech who just has no filter at all. This book provides a different heroine to react to this, and while Mai was basically doing her best Senjogahara impersonation, Tomoe is the sort of blush, stomp her feet and say “Geez!” at his antics. Tomoe is far more likeable in this book when she gets the entire novel to sell herself, and I really enjoyed her backstory, which also tied into the reason why Sakuta, who is still trying to tell Mai he loves her, agrees to do this at all. There are hints of future plot developments – the third book seems to feature Rio, and there’s some setup for that here, namely her not-so-hidden crush on her friend Yuuma, and there’s another shocking cliffhanger ending that will no doubt play out in future books somehow. And there’s a lot of fun humor, mostly because Sakuta exists.

To sum up, I was wary of this book, but it ended up being a lot of fun. I am definitely getting the next in the series.

By Hajime Kamoshida and Keji Mizoguchi. Released in Japan as “Seishun Buta Yarou wa Bunny Girl Senpai no Yume wo Minai” by Dengeki Bunko. Released in North America by Yen On. Translated by Andrew Cunningham.

(This review is based on a review copy provided by the publisher.)

A lot of times these days, licensed light novels tend to fall into two different categories: “we’re licensing this because the Japanese publisher knows there’s an anime in the works”, and “the anime has come and gone but this did not immediately vanish into obscurity the moment the anime ended so let’s take a flyer on it”. Rascal Does Not Dream of Bunny Girl Senpai seems to be the latter – it started Japanese publication in 2014, which makes it quite old by licensing standards. I haven’t seen the anime (yes, try to contain your surprise) but I’d certainly heard of it, with it seeming to occupy that odd position of both “high school romcom” and “vaguely supernatural things happen” that we see in Haruhi Suzumiya and others. That said, I did notice (and tweeted about) a major different I spotted: unlike all those novels with snarky first-person narrators whose inner thoughts we are buried in, Aobuta (its Japanese nickname) is third person. It makes a difference, believe it or not. 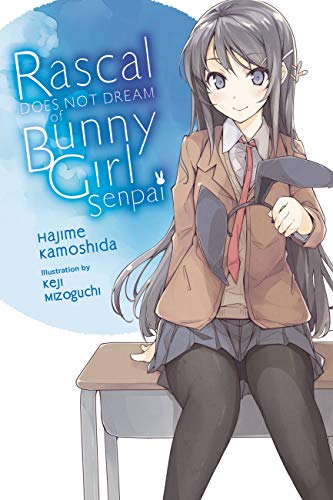 Our hero apparently already had a boatload’s worth of light novel events happen to him before the series began: Sakuta has a past, which has left him with huge gashes across his chest, a little sister who’s a shut-in, and a reputation at school that means he has precisely two friends. One day at the library he is startled to find Mai, an upperclassman of his and a famous actress… well, actress on hiatus… dressed as a bunny girl and walking around. No one pays any notice to her – but Sakuta can see her, much to her shock and dismay. As they gradually get closer he discovers that more and more people simply don’t notice that Mai exists, and it’s becoming something of a problem. Since he has experience of this thanks to his sister’s history of being bullied (which also involved mysterious supernatural consequences), he chooses to help her out. It helps that she’s really hot. It doesn’t help that he will say absolutely anything that comes out of his brain with no filter.

As I said, this is in third person, so while we can hear about Sakuta’s thoughts and decisions, we don’t get his specific thought process. This means that things that others, such as Kyon or Hachiman, might think to themselves for the benefit of the reader but not bother to say aloud he says aloud. This might actually make him more attractive to Mai, who is used to people not knowing how to talk to her and thus not talking to her at all. The relationship between the two is the best part of the book. I also like how he expects her, when they first meet, to behave like Senjogahara – the book is aware of its influences. Mai is a bit less sharp than that, but still falls into that basic type. In the second half of the book, as things turn more serious and Mai’s “no one can see me” condition turns potentially fatal, the two have a warmly growing bond that I want to see more of.

The book is part of a series, which not only makes for an annoying cliffhanger (expect a Groundhog Day loop next time) but also sometimes means things clearly meant for future novels are introduced here, no matter how awkwardly they may fit in. If Tomoe is the subject of the next book (as the title suggests), she’s going to have to be more interesting than she was here to win me over. (That said, she clearly wins out over the girlfriend of our hero’s best friend, who seems to be designed to be a Hate Sink so that the fandom can go after her and leave the rest of the cast alone.) In the end, I found Rascal Does Not Dream 1 (the titles will be changing with each book) to be an excellent stand-alone romance that seems to be a harem-ey ongoing series. As such, we’ll see what happens in the second book.