our last crusade or the rise of a new world

Some authors are really good at plotting and worldbuilding. Some succeed at depth of characterization. Some write amazing dialogue. And then there’s Kei Sazane, who does none of those things, but that’s OK, as they have one thing that they do better than most anyone else: crafting cliffhangers that make a reader want to get the next book. I spent most of the second volume of this series thinking I would drop it after I finished, only for a last-minute plot twist that made me want to read more. Unfortunately, little is made of the plot twist here, mostly as the characters are two-dimensional. And once again I got to the end thinking, “yeah, OK, interesting did not happen, dropping this” only to get an epilogue which made me say, “Hrngh, now I want to know what happens next.” It’s a praiseworthy skill, and very well done. Of course, I wish that the skills had been used on a better light novel series. 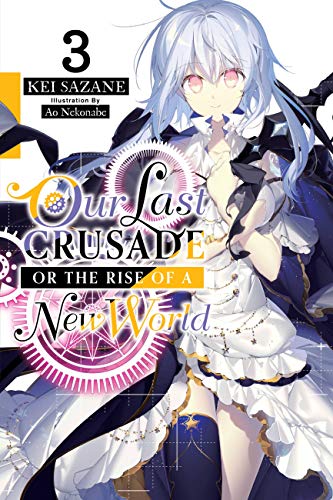 Last volume ended with the revelation that Iska’s captain and designated dojikko Mismis now had an astral crest after basically falling in a pit of magic. So they have to figure out a way to keep it hidden so that she’s not imprisoned for life at best and executed at worst. I suspect skin-colored bandages, tried here, are not going to work well. It doesn’t help that, aside from one or two flashes of actually being a commander, Mismis is a fluffhead of the first order. (The author loves to write those types – more on this later.) Fortunately, they have a reason for her to be away from the Empire and using an Astral Crest – they have to infiltrate the enemy territory. Unfortunately, everything goes south when, for once, it’s Iska who gets to be the designated idiot, sipping a drugged drink provided by Alice’s maid and now taken prisoner in the hideous… honeymoon suite of a first-class hotel.

Last time Alice and Iska never met up, this time they’re together most of the book. It’s not really a great thing for Alice, as, like Mismis, the author loves to write her as a fluffhead, in this case a girl in love who doesn’t actually realize it. The ‘kidnapping’ wasn’t her idea, and she prefers to settle things on the battlefield in a one-on-one fight, of course. Unfortunately, the Empire is also trying to break out a top security prisoner (who is basically Gilgamesh from Fate/Stay Night only with magic instead of swords), and so everyone needs to rush off and stop everything ending in fire. Including Iska, who is, of course, also slowly falling for Alice in his own stoic lunkhead sort of way. Both Iska and Alice excel at combat scenes, where they’re both allowed to be ridiculously overpowered and cool, rather than enacting A Child’s Garden of Romeo and Juliet Scenes.

There’s no actual bad scenes or writing here – everything is very competent but empty, and reminds me a lot of Strike the Blood or Asterisk War in that it feels like it was written as a novelization of an anime. The main cast are all pretty likeable, and as I said, there’s a great cliffhanger that will probably make me read the 4th book in the series. I’ll be grumbling as I do, though.

The days when people were begging for a light novel – any light novel – to be released are long since past. We live in a glut of light novels, with new titles releasing several times a week, and it’s impossible to keep up with them all. This is difficult for someone like me, as I have a very high tolerance when it comes to entertainment. I have started to try to find reasons to drop series so that I don’t have to get even further behind in reading all the other series I read. And, honestly, Our Last Crusade seemed a perfect candidate for this after its second volume. Its plot was OK but not earth-shattering. The women in the book are… not great, particularly in this volume. There are some decent fights, but less of the self-analysis of the respective regimes we saw in the first book beyond “the empire tortures witches”. It seemed like a good place to leave off. Alas, then came the epilogue. 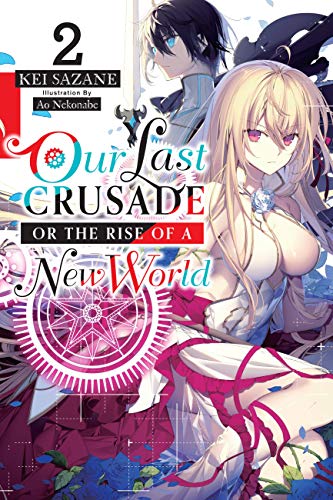 A vortex has appeared in the world, one that can give the right people amazing powers. Unfortunately, it’s desired by both sides. And so once again Iska and Alice are fighting against each other… or so it would seem. But unlike the last book, this time they keep missing each other, turning a Romeo and Juliet-style fated romance into drawing room farce. Most of the emphasis of the book is on Iska’s end, where his battalion has a very rude and uncaring leader and also a traitor, which is not good news for Captain Mismis, who is captured by said traitor. On Alice’s end, there’s a smug masked man and a powerful woman named “Kissing” with a blindfold and an attitude, but mostly there’s just Alice getting very, very annoyed that she isn’t making out with… erm, pardon me, fighting Iska to the death like she should be doing.

I’m gonna be honest here, Alice whining over wanting to fight Iska about every single page is going to get very boring very fast, and given that I suspect that once she gets over this it’s going to turn into “a young maiden in love” I’m not looking forward to future developments. Mismis, also, really really needs to develop beyond a captain who reads more like a mascot, and spending most of the second half of the book captured and in peril does not help. The book doesn’t really slide into being actively annoying or bad… it’s well-written, the pacing is good, and you can simply grump at Alice and Mismis as you go. But it lacks a hook that made me want to read past this volume. Or at least it did till the end. I will not reveal what the two hooks are, but I will say they’re perfectly delivered for maximum “dammit, now I have to get the next book in the series” effect. In particular, I’m cautiously optimistic one of the two issues I had with the book might change because of this? Maybe?

It could also be I’m just a soft touch who’s too easily pleased. But I am hoping that the third book in the series gets a bit more political and also does more with its female leads than having them be cliches.

Let’s get this out of the way first: that is one awkward title, and it’s actually the much better choice, as when this was first announced by Yen the title was the even worse “The War Ends the World / Raises the World”. It’s trying to convey a certain apocalyptic mood, asking whether this book will feature the end of everything or the rebirth of something. This world has two power blocs fighting each other to the death. The Empire is a nation of science, with a mysterious council behind the scenes and battle-hardened swordsmen and engineers. The Sovereignty is a magic-dominated world, run by a royal family descended from their progenitor, and controls the very elements. They hate each other a whole lot. The Empire has just released its best swordsman, currently serving life in prison, to defeat the Sovereignty’s most powerful astral mage. He was a boy. She was a girl. Could I make it any more obvious? 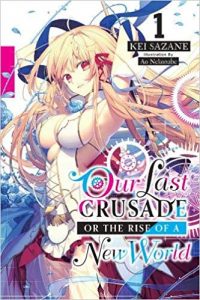 If I was to be even more glib than I was in that last sentence (something I’m not sure is humanly possible), I’d say that this book is something like “Romeo and Juliet meets A Certain Magical Index”. Certainly Index fans will have a feeling of similarity with the magic and science sides of this particular world, especially given each have mysterious and possibly evil heads of state. Iska doesn’t quite have Touma’s bad luck, but the whole reason for his imprisonment seems to be that he saved an enemy mage (she didn’t have much power, and therefore he didn’t feel she deserved the treatment she got), which is very Touma. As for Aliceliese, there’s a good deal of Mikoto in her, particularly her tendency to get overemotional and upset when she keeps running into Iska coincidentally despite their being (supposedly) bitter enemies. Of course, they’re actually falling in love at first sight. Which, to be fair, is not much like Index, which will never given Touma romantic feelings.

This book is pretty solid, with some nice fight scenes, very amusing comedic romantic moments, and a reasonably-sized (for now) supporting cast. I will admit I did not immediately warm to Mismis, Iska’s commanding officer and “big sister”, mostly due to a very unfortunate interior illustration which can be described as “lol, huge boobs”, and I felt that her “empathic” skills that are apparently why everyone respects her should have been used a bit more often than the “ditzy klutz”. Speaking of the illustrator, they may be familiar to North American readers from Battle Divas, as well as the 2nd (of 3!) artists for The Magic in This Other World Is Too Far Behind!. Not a fan. Despite these flaws, though, I was intrigued enough to try more. It’s not as serious and dramatic as I’d have liked (for those who want that, give 86 a try), but if you want an “anime-style” action romance that for once does not seem to involve magic academies, this is a decent start.