By Iori Miyazawa and shirakaba. Released in Japan as “Urasekai Picnic” by Hayakawa Bunko JA. Released in North America by J-Novel Club. Translated by Sean McCann.

I’ve talked before about how this book is well served by the fact that Sorawo is our narrative voice. This means, of course, that we see what she thinks of Toriko’s words and actions, but don’t get Toriko’s own POV in reverse. The fun part lies when the reader is able to infer what Sorawo isn’t. Certainly Sorawo is correct that Toriko is obsessed with finding Satsuki, but she seems to equate that with a romantic longing, and on our end we’re not so sure. More to the point, Sorawo can be very savvy in some ways and not in others – there’s a scene where Toriko mentions the fact that she was brought up by two mothers, and it’s very clear she’s dropped this information on Sorawo to see how she’s going to react… because of course Toriko is in love with Sorawo, something that has been clear for some time but is increasingly textual as the book goes on. It’s good characterization, and the narrative POV helps sell it. 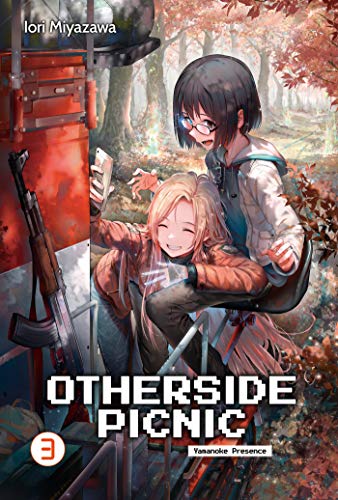 There’s three main stories in this volume. In the first, Toriko and Sorawo go back to the other world and try going in a different direction, but their rooftop picnic (love the idea of an actual picnic in this book) is interrupted by some time-stretching shenanigans and the ominous presence of Satsuki, who is invisible to Toriko but very visible – and terrifying – to Sorawo. The second story sees the return of Sorawo’s kohai Akari, who Sorawo continues to be wary and uncomfortable with, and Akari’s childhood friend Natsumi, who has unfortunately not done as the creepy urban legend told her to, and is suffering as a result. Finally, Sorawo and Kozakura are kidnapped by a cult, whose leader has a voice much like Toriko’s hand and Sorawo’s eye, and said leader really, really wants to meet Satsuki. Unfortunately for all concerned, she does.

I will admit, the actual urban legends/ghost stories presented here did not ring a bell for me, nor are they really supposed to for Japanese readers, I think, despite all the documentation of 20-year-old 2chan threads in the book’s appendix. Indeed, Sorawo makes an important distinction here, as she hates “I know a guy who this happened to” stories, which are far more likely to be made up, and looks for real “this happened to me personally” legends. As with the second volume, the scarier stuff is at the back half here, though those with teeth phobias may wince at the second story. This includes Sorawo herself, who upon being kidnapped and locked up brings to the fore another part of herself only concerned with survival (though honestly, there’s not much difference between this and her normal self, IMO – I think a lot of it may simply be her psyching herself up.) The climax of the book leaves one dead, one maimed, and one big Satsuki problem that still isn’t going away, but at least our heroines are OK.

This is getting an anime soon, apparently, and it will be interesting to see how they convey some of the concepts here – a lot of the horror themes work best on the page. As for this volume, it’s another strong one in the series, and I look forward to the fourth one, if only to see how – or if – Sorawo responds to Toriko’s words at the end.

By Iori Miyazawa and shirakaba. Released in Japan as “Urasekai Picnic” by Hayakawa Bunko JA. Released in North America by J-Novel Club. Translated by Sean McCann.

The second volume starts up with a dangling plot form the first volume, as Sorawo and Toriko go back into the other world to rescue to US Marines who remained trapped there. It makes for a tense chapter, as moving an entire company (which has been growing smaller the longer they stayed there, admittedly) is not that easy in a space like that, especially when they come across the Japanese Urban Legend Monster of the week. After this they end up in Okinawa, and decide to stay and hit the beach… but instead end up back at the other world, beach version, which features more disturbing things and the appearance of the woman who is Toriko’s obsession and is rapidly turning into Sorawo’s nemesis, Satsuki. Both of these chapters are well told, and the characters are fun to read, but I felt they weren’t quite as terrifying as the first book could be. 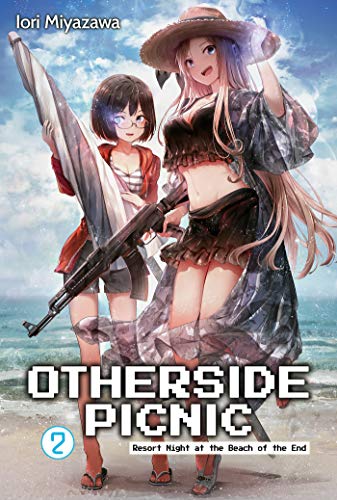 The third story delves more into the characters, as we meet another student at Sorawo’s university, who has heard rumors that she can help with supernatural issues and is being stalked by ninja cats. Yes, ninja cats, and a good deal of the chapter is spent trying to deal with the seeming silliness of the proposition. The ninja cats do end up posing quite a threat, and there’s another tense sequence, but mostly what this third wheel does is show off how tight-knit Sorawo and Toriko have become, as well as the difference between them – Sorawo is distancing herself from everyone but Toriko – at least in her head – while Toriko sees it as Sorawo having opened up to other a lot more – so much that she doesn’t need Toriko anymore. This miscommunication leads to the fourth and best chapter, where the horror pops back into the pages like it was waiting for you to relax.

The final chapter shows us who Kozakura is getting the money from to pay for Toriko and Sorawo’s other world finds, and also shows us that the other world is a big business… and one that is breaking many other people. From the moment we enter the seemingly empty building that serves as the “lab” where Satsuki worked, everything becomes terrifying, with some of the most evocative descriptions of body horror I’ve read in some time. It’s clear that Toriko’s hand and Sorawo’s eye are relatively minor compared to the issues of other researchers. This reach a fever pitch when Sorawo triggers what might be a trap set by Satsuki… a literal puzzle box that starts to kill the other of them in a nasty and lingering way. Can Sorawo work together with Toriko to stop it? And stop Toriko sounding as if she’s about to run away forever and/or kill herself?

My first review mentioned this was the first license from Hayakawa’s “yuri line” that was multiple volumes, adn I’m even more relieved that there’s at least two more after this, as I’m becoming very invested in the story. The yuri, while still not explicit, is much stronger here, and the horror is a slow burn till the end when it hits a fever pitch. Recommended for fans of both genres.

By Iori Miyazawa and shirakaba. Released in Japan by Hayakawa Publishing. Released in North America by J-Novel Club. Translated by Sean McCann.

This is the third in J-Novel Club’s line of “sci-fi yuri”, and it’s arguably the least sci-fi of the lot. In fact, I’d argue it’s more straight up horror with elements of folklore, though there are lots of explanations for what’s going on in scientific terms, and even a “works cited” at the end. As with the author’s previous book, Side-by-Side Dreamers, I think this book would be more for the horror fan than the yuri fan. That said, the relationship between the two leads is one of the main reasons to get the book. It’s told in first-person POV, and does a good job of sublimating its “I am attracted to this woman” vibe beneath a general “she is pretty while I am so plain” mindset. But it’s the plot that brings them together, as they’re relying on each other while exploring – and later, trapped – in another world which has very lethal dangers to both of them. The dangers are the reason I called the book horror – this book is TERRIFYING at times. 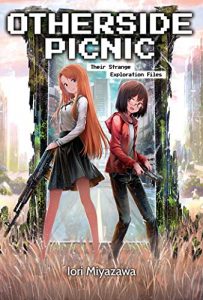 Sorawo is our main heroine and narrator. She presents herself as being your typical introvert with a normal past, which turns out to be mind-bogglingly far from reality, but we don’t find out about that till the end. She likes to explore abandoned areas, and one day found an entrance to another world. After a couple of brief minute-long explorations, she decides to investigate for real – and ends up about to drown in a marshland. She’s saved by Toriko, who appears to be Sorawo’s opposite, but again, appearances can be deceiving. She’s in this other world looking for her friend/mentor/crush, who disappeared a while back. They decide to team up and try to find her, and also learn more about this world and its monsters, which are seemingly based on Japanese urban legends… something Sorawo is very familiar with.

I will state here that there was one aspect of the book I wasn’t too fond of. The concept of the brilliant scientist/doctor/genius who looks like an elementary schoolgirl has been done to death in Japanese media, and I don’t think we needed it here. Honestly, Kozakura would have worked exactly the same without that aspect of her character, functioning as “mission control” and later brought in, much to her dismay, to the actual otherside world. It was hard not to think of her as Hakase from Nichijou. Other than that, though, this ended up being a ball to read, though I will state those who dislike horror imagery may want to give it a pass. There’s lots of images and phrasing designed to scare, and it works. Sorawo also grows greatly throughout the book, forced to examine her own personality and realize her shortcomings. Toriko doesn’t fare as well, as we get no POV of her, but the good news is that for once this is not the first and only book in the series, and there are two more to date. Which is good, as the book ends with everyone still trapped, and I’d like to see how/if they get out.

If you enjoyed Last and First Idol and Side-by-Side Dreamers, there’s no reason not to immediately get this book. For those new to the “genre”, I’d recommend it for thrills and great dialogue and imagery.