By Aoi Makino. Released in Japan as “Sayonara Miniskirt” by Shueisha, serialization ongoing in the magazine Ribon. Released in North America by Viz Media. Translated by Tetsuichiro Miyaki. Adapted by Nancy Thistlethwaite.

This is one of Viz Media’s strongest debuts in some time, and it’s taken me a while to find a way to put down some words and review it. There’s a number of reasons for that. It’s a strong debut but it’s not a fun book – this book wants to deliberately make you uncomfortable and challenge traditional views on things. It looks at idol culture and the obsessiveness of their fans, about reaching out to accept help and how that can be both a good thing and also a bad thing; about fighting back against the everyday sexism in the lives of women and why some choose not to. There’s a lot going on here, including some things that (possibly) spoil the entire book that I am going to do my best to dance around. In the end, though, this is a book that grabs you by the collar and rips your face towards the pages. I’m not sure I enjoyed it, but I really liked it. 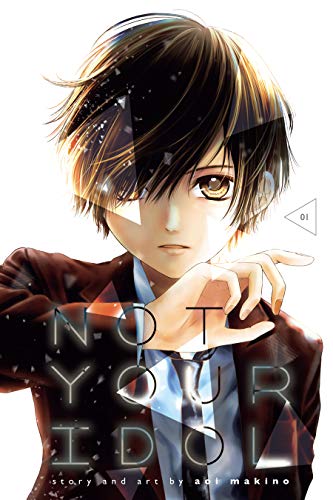 Nina Kamiyama is a brooding, quiet high school student who dresses in the male uniform, and is immediately contrasted with the rest of her classmates discussing things like how good their legs look in skirts. We also meet Hikaru, a young man in the judo club who seems to be the only guy in their class who’s not turned off by Nina. Things come to a head when the teacher announces that someone is assaulting girls around their school area, so everyone should go home in groups. Of course, Nina is a loner, and also does not want to show any weakness, so she goes home by herself, despite clearly dealing with some past trauma. She is then confronted by Hikaru, who knows her secret: she’s Karen Amamiya, former member of a top idol group who retired after being knifed by a stalker at an event. He admits that his younger sister was sexually assaulted by a teacher, and that she became a fan of Karen’s idol group because they said it was “OK to be a girl”. Slowly Nina and Hikaru grow closer… but is that what’s really going on?

I don’t usually post pictures of panels in my reviews, which is a shame, as there’s lots of terrific ones here. Nina leaping on a desk to grab some jerk’s school tie, saying “girls don’t dress to please guys like you”. Nina and Hikaru helping a shy classmate when she’s groped by a stalker on a train. The entire last few pages of this volume. It’s not shying away from problematic behavior, from both boys and girls, and contrasts Nina heavily with the cute, bubbly Miku, who is everything stereotypically feminine. Nina is also in touch with her former idol group, and we learn how they’re struggling to keep popularity now that Karen has retired… and we also hear from her friend Sara that Karen was too good at suppressing her emotions and being “inhuman”. All this culminates in the climax to the book, which again I won’t spoil, but shows us everything we’ve learned about a character to date and makes us question it.

After finishing the book, I was on the fence about whether I really wanted to read more. I’ve since come around. I want to find out what happens next. I hope you do as well.