my friend's little sister has it in for me!

By mikawaghost and tomari. Released in Japan as “Tomodachi no Imouto ga Ore ni dake Uzai” by GA Bunko. Released in North America by J-Novel Club. Translated by Alexandra Owen-Burns.

I’ve said this before, but sometimes you just want McDonald’s. You know that you could walk two more blocks and go to a nice steakhouse or an expensive Asian restaurant, but you can’t have that every day, and you feel like McNuggets, dammit. Sure, you’re probably going to get some bad along with the good, but you at least know exactly what you’re getting and are not surprised. This applies, believe it or not, to light novels as well. Sometimes I want to be amazed and transported to another world by wings of song, etc. And sometimes I want to read a harem comedy where the hero is as dense as lead and the heroines are all variations on “I hate you because I love you”. Good news! This book is McDonald’s. It won’t blow you away, but it will fill you up, and you know what? It came with a nice Apple Pie as a treat. (Have I finished grinding this metaphor into the dirt? Yes? Let’s get to the plot.) 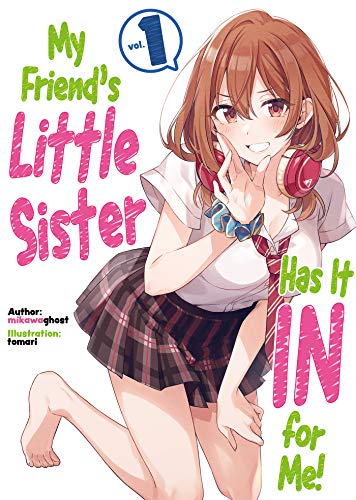 Akiteru is our main character, and he has a lot on his plate. He’s the head of an amateur game development group, their new release is selling great, and he wants a job with his uncle, who runs a MUCH LARGER game company. The uncle agrees, on one condition: that he pretend to be his cousin’s boyfriend for the next year. She’s transferred schools after being bullied. And then there’s the titular little sister, who has apparently been reading the books of Takagi, Uzaki and Nagatoro and taken them to heart. She flirts aggressively with Akiteru, whose one main fault, as with most LN protagonists, is a complete inability to recognize anything as love. To him, her flirting is just plain mean bullying. And as for his cousin, well, she hates him too. Right?

To get the bad out of the way, there’s a character here who can be summed up as “shotacon”, and it’s as annoying as you’d expect. Also, the “friend” in the title gets very little to do, but I am hoping future books will change that. The reason I am hoping this is because the book’s chief strength is balancing out the love triangle that is forming around Akiteru with the game group he’s created, a tight-knit group of friends. Mashiro, the cousin, is the seeming newcomer to the group (though she has a rather obvious secret), and most of the second half is getting her introduced, loosening her up, and dealing with the bullying she had to content with at her previous school. I enjoyed that. Iroha, the little sister, is terrific, being obnoxious in the fun way rather than the irritating way. As for Akiteru, he’s hard to get a handle on. He does nice things, but his narration is basically “grumpy old cuss”, and he needs a shot in the arm of idealism. He’s not as bad as, say, Hachiman, but it can make him hard to read on occasion.

This just had an anime announced, and it’s not hard to see why – it isn’t due to the quality of the writing, it’s due to the fact that it checks a whole lot of ‘this should be an anime’ boxes. Despite reservations (see above), I think it’s the best of the three GA Bunko romcoms that J-Novel Club recently licensed. Fans of that genre who don’t mind the usual dense hero should get a kick out of this.