middle-aged businessman arise in another world

By Sai Sumimori and Ichijirushi. Released in Japan as “Around 40 Eigyou-man, Isekai ni Tatsu!” by Kodansha. Released in North America digitally by J-Novel Club. Translated by Taishi.

The trouble with a series starring an overpowered family is there’s very few ways that it can be taken forward. We already have a guy who’s brilliant at sales and marketing, hella strong, charismatic, etc. His goddess wife is busty, gorgeous, can stop her rambunctious kids with magic spells, and, it is mentioned a few times, loves sex with her husband. Their kids are 1) so smart they’re past university level, and now joining Dad at his job; 2) ridiculously strong and powerful, and 3) good at magic and can talk to magical beasts despite being five. It’s a great family to read about… for about a book. But this is book two, and I think right about the time that Shouzou ran across the ocean to talk to a water dragon without, y’know, falling into the water that the author realized there needed to be a new cast to focus on. As a result, we pull back to examine the local kingdoms, and meet a slothful young prince and a calculating young princess. 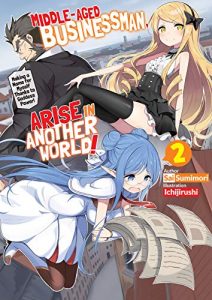 Sharlo is shown to be a very familiar type to Japanese readers: thought to be mediocre compared to his genius younger sister, he took things hard, holed up in his room, gained about 120 pounds, and sits there eating potato chips. He is not, needless to say, prince material, but needs to be leveled up due to political dealings. As such, Shouzou has him become an adventurer and start off with the job that absolutely no one wants: sewage cleaning. As a result, we gradually see there’s a decent person under this who acn also be fairly savvy when he wants to be. He was just abandoned by his minders for not being perfect. In another kingdom, Yuliana is 11th in line for the throne, but is good enough for her father, King Evil IV, to arrange a marrage for. The princess, despite her maid’s protests and fat-shaming of the prince she’s supposed to marry, decides to investigate… by disguising herself as her maid’s bodyguard and going to Sharlo’s kingdom. Romantic comedy bits ensue.

The protagonists are nice enough, and I liked their story, but it has to be said it’s not the story I signed up for. Shouzou flits in and out of the book, stopping a bad guy here and there, nudging our couple in the right direction, doing various political dealings, etc., but the book doesn’t know how to make him the main character again, so doesn’t bother. The book also has one of the most hiarious “cut short” endings I’ve ever seen, seemingly setting up events for the next book in the series… then saying “but Shouzou had to leave that for the denizens of this world, as he would be leaving soon. The end!”. It reads like the editor put it in after the book was submitted to show the series was over. I did enjoy the side story, showing Sharlo’s genius sister, who has a bit of a brother complex but not, thankfully, in a “I want to marry my brother” sort of way, trying to find her own fiancee and being gently reminded she’s 8 and should grow up first.

If you enjoyed the first book, definitely read this one. Sharlo and Yuliana are likeable enough, and reminded me a bit of some Realist Hero characters. But the series seems to end here, possibly as if it continued our OP family would go back to Japan and leave it as a normal fantasy book. And who wants that? We isekai or die here.

By Sai Sumimori and Ichijirushi. Released in Japan as “Around 40 Eigyou-man, Isekai ni Tatsu!” by Kodansha. Released in North America digitally by J-Novel Club. Translated by Taishi.

To a large degree these new isekai titles that we’re seeing are playing to a crowd who knows what it wants. There is, at least here in North America, a relatively loud contingent who are sick of isekai and moan and groan when they see more of it, but the fact is isekai sells a ton, and there are readers who want more and more of it. The same goes for so-called overpowered characters. Hate on Kirito if you must (and he’s not even a good example of the type), but folks love to read about newly isekai’d folks who suddenly find they can do anything. I have excellent news for those of you who like said characters: in this book, we get an entire family of them. That said, I also have good news for those who dislike these types of characters: for the most part, we stick with the father, and he rarely busts out his god powers, preferring instead to trust in what he’s really good at: sales and marketing. 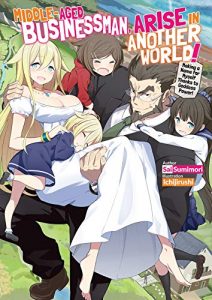 We first meet our hero, Shousou, as a sad-sack 28-year-old salaryman who’s not very good at much of anything. In the pouring rain one evening, he runs into a beautiful goddess who’s experiencing life on Earth. Faster than you can say “Oh My Goddess”, the two go back to his place and fall into bed. Thirteen years later, they’re married with a family, and he’s now a huge success thanks to brimming with confidence after… well, boning a goddess. And he’ll need that confidence, as one day he and his entire family are transported, house and all, to another world. There, another goddess (who is far less impressive than his wife, a running gag) informs them that it was an accident but it will be at least a year till they can be returned. Shouzou has to provide for his family, but adventurer is a job that would keep him away from the home for weeks on end. So he joins a down-on-its-luck guild as their sales manager, promising to make them the top guild in the city within a year.

Lest you think that Shouzou’s sales pitch is his only power, rest assured he has power out the wazoo thanks to his goddess wife (who helpfully explains that sex with a goddess every day will do that to a mortal). But it’s mostly for emergencies like when he has to slap a dragon to get it to go away and such. For the most part, this really is Shouzou dealing with a fantasy world guild the way a marketer would, and using clever ideas to move forward. It’s actually the main reason to read the book, and a lot of fun. I do wish we’d seen more of the family – having been the catalyst of all this, his wife is content to sit back and be sweet for the most part, though the three daughters do get tiny subplots showing off how a combination of their heritage and being in a fantasy world means they’re all superhuman as well.

I enjoyed this a lot more than I expected. Shouzou is dynamic and fun, the guild employees are nice, and even the stereotypes, such as the ojousama teenager with princess curls and the arrogant third son who lashes out when he can’t get his way are relatively harmless compared to other examples of those types. The second volume is the final one, though as with a lot of light novels I do wonder if it has an actual ending or just stops. I will definitely want to find out, though.