may these leaden battlegrounds leave no trace

By Kei Uekawa and TEDDY. Released in Japan as “Uchinukareta Senjou wa, Soko de Kieteiro” by Fujimi Fantasia Bunko. Released in North America by Yen On. Translated by Roman Lampert.

It’s hard not to think about 86 when reading this new Yen On series, and I do wonder if war-torn teens fighting hopeless battles and getting blown to bits’ is a new light novel trend like villainess otomes. That said, if it’s trying to be another 86 it’s not too bad, getting a majority of the parts right. The main plot itself runs on a plot device I personally dislike, and there some tonal dissonance about a third of the way through, but when the book is being serious it’s very good at ramping up the tension and showing us a young, driven man who wants to end war and the white-haired, mysterious girl who is here to help him do so – and also tease and mock him, because it’s still a light novel. We even have an unlucky childhood friend of sorts. And while it doesn’t hit on ‘war is hell’ quite as much as 86, certainly war is not portrayed in a positive light here at all. 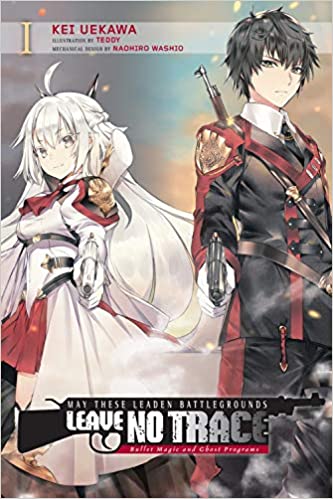 We open with Rain, a military academy soldier who manages to escape certain death by way of mysterious silver bullets he finds on the ground. Indeed, this war is run on ‘magic bullets’, each of which have a different function. The bullets Rain finds, when they kill a person, erases them and everything they achieved from existence. Later he discovers the owner, a young girl named Air, who arrives at the Military Academy where he normally is when war is not omnipresent and proceeds to explain that she is a ghost that is being forced to return whenever war is at its worst. She wants to use Rain to stop this endless cycle. Unfortunately, his partner and not-quite-girlfriend Athly is not happy with this, and what’s more, just eliminating the right people from history does not always solve the problem.

Let’s start with the issues I had. First of all, the ‘if you kill the man who invented cars there won’t be cars’ rule of time travel is very, very dumb. To be fair, near the end of the book we see that her analogy is not all it’s cracked up to be, but it’s still bad. Secondly, the section of academy life about 1/3 of the way through the book, which is meant to be a light-hearted bit of breathing space in an otherwise grim book, feels like it belongs in a different novel entirely. That said, setting up Athly as the cute normal girl with a crush on our hero does end up paying off later on down the line. As for Rain and Air, I am hoping, based on plot spoilers that I won’t get into, that they avoid their own romantic relationship. Honestly, romance seems secondary here to warfare, and that’s fine.

To sum up: this is a decent, solid debut for those who like grim war stories and fantasy/magic-based soldiering. I’ll be getting the next book.