By Haruka Momo and Maro. Released in Japan as “Marielle Clarac no Saiai” by Ichijinsha Bunko Iris NEO. Released in North America by J-Novel Club. Translated by Philip Reuben.

There have been a lot of J-Novel Heart series by now, of various shades and types, and one thing that Marielle Clarac has over the rest of them is that it’s easily the biggest in terms of page length. These are all chunky books, a good 50 or so pages longer than the average light novel, and filled with lots of plot complications and twists. It’s nice to see the reader getting some bang for their buck. Especially as, as with previous installments of the series, we have to alternate between Marielle’s crime solving persona and Marielle being a complete flibbertigibbet, going on about romantic and BL-laced tropes while also sometimes missing the obvious. But that’s why we’re here, and we wouldn’t have it any other way. Last time I said the wedding seemed imminent, and it still is (the next volume is called “The Wedding of…”), but first we have to deal with a bit of a crisis that might put a wrench in things. It’s hard to marry when your fiance is under arrest. 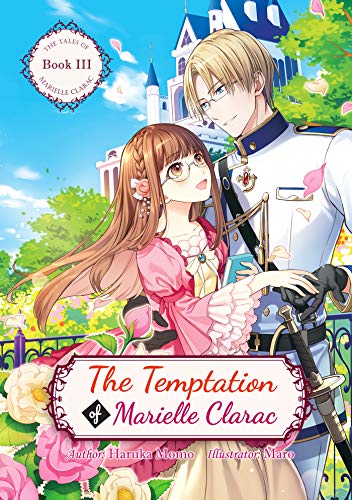 To Marielle’s horror, Simeon has been taken into custody for allegedly selling state secrets, and while it’s fairly obvious he isn’t doing that, she is ordered not to interfere in the investigation. As you can imagine, she does not obey this order at ALL, twisting around various vows and promises she makes with an increasingly frustrated Prince to try to see who is framing her beloved. Is it the childhood friend who seems to have a troubled past? Is it the gorgeous woman who wears pants and seems to be very friendly with Simeon indeed? (And does this mean that Simeon has had other women before Marielle?) Is it the gorgeous blond who looks like he stepped out of Rose of Versailles, who Marielle keeps getting saved by at odd moments? Is it Simeon’s puppy-like brother? (OK, it’s probably not.) Or is it the angry Naval commander with a vicious hatred of Simeon? The answer… is not TOO surprising, but well handled.

Now that Marielle and Simeon are a couple, and know of each other’s feelings, but are NOT married yet, there’s a lot of tension between them. Part of this is simply that they are really lusting after each other, and there are several almost kisses here, along with Simeon trying to exercise great restraint in not pushing Marielle up onto his desk and having his way with her. Balancing this is Marielle’s poor self-image, which continues to balance with her extroverted confidence – she’s accepted her plain looks, and so doesn’t get upset when they are pointed out. (Simeon does, as his brother finds out in a painful way.) This leads to some doubt and jealousy when she meets Rose, who also could have stepped out of the pages of Rose of Versailles. Among this is the usual thriller stuff, including a visit to a brother far shadier than the one Marielle usually sneaks into, and another wonderful conversation with Marielle’s nemesis Lady Aurelia, who will be best friends with her by Book 5 at the rate they’re going.

So another fun entry in the series, provided you can tolerate the heroine basically doing whatever the heck she wants with no regards to the consequences.

By Haruka Momo and Maro. Released in Japan as “Marielle Clarac no Saiai” by Ichijinsha Bunko Iris NEO. Released in North America by J-Novel Club. Translated by Philip Reuben.

I enjoyed the first Marielle Clarac series while noting a couple of flaws, and I’m pleased to say that this second book at least does a good job fixing one of them. (The “BL tease but no more” aspect is, I fear, not going away anytime soon.) But the mystery/thriller aspect of the book works even better than the first, keeping us guessing as to the motivations of the antagonist (who is not really a villain) and switching immediately to the thriller aspect the moment things are revealed. There’s also a good helping of elements of the first book I greatly enjoyed: Marielle and her tendency to see everything in terms of romantic ‘shipping’ tropes, who gets to simultaneously be very clever and good at reading people and also capable of the most shockingly dumb moves when trying to chase after a lead. She’s not quite an amateur detective, but it’s on the verge of that genre. And the relationship between her and her fiancee Simeon is fantastic. 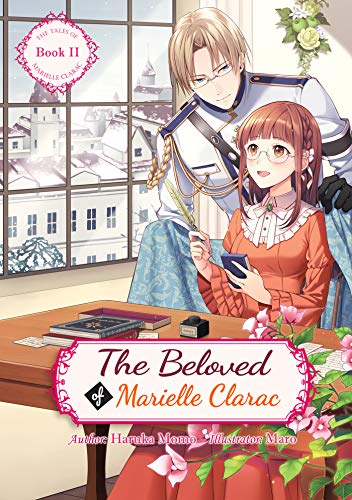 It’s wintertime, so all the garden parties are inside. More importantly, the Crown Prince (Simeon’s best friend) is being forced to step up his attempts to find a bride now that Simeon and Marielle are engaged. Marielle recommends, in possibly the best scene in the book, the girl who had been bullying her in the past, because she’s clearly not concealing any hidden side and would stop doing it if her husband demanded it. The prince, however, falls for Michelle, a shy and withdrawn young woman who would rather be anywhere but at this party but who reluctantly opens up to the prince anyway. The Prince invites Simeon and Marielle to Michelle’s estate to basically be on his side, and they discover that the family seems to treat her with contempt, or at least treats her as a pawn rather than a daughter. What secrets does Michelle hold? And why is Lutin here and pretending (IS he pretending) to be an Earl?

Marielle and Simeon may have admitted their love to each other in the last book, but that doesn’t mean that they’re not still filled with doubts and misgivings. Marielle has a tendency to describe herself as plain and dull so often that it would come across as self-loathing if she weren’t so confident – it’s practicality turned inward and twisted, and I’m glad Simeon tries to get her to see that she can in fact be attractive. Marielle also has a tendency to get herself into trouble, and while I doubt that’s going away she does at least understand how much it’s panicki8ng him when she does this. The last third of the book has a number of excellent chase scenes, and shows that the author is just as good at action as they are at mystery and romance. As for Michelle’s secret, it’s relatively obvious (Marielle guesses it), but also not quite as obvious (Marielle is stunned), and is handled slightly better than I expected.

It’s suggested that the wedding might be in the next book, though given the subtitle for the third volume is The Temptation of Marielle Clarac that may not happen. But I’m definitely going to be reading more in any case. These are a fun addition to the J-Novel Heart line, and will interest any romance readers, even those not interested in Japanese light novels.

By Haruka Momo and Maro. Released in Japan as “Marielle Clarac no Konyaku” by Ichijinsha Bunko Iris NEO. Released in North America by J-Novel Club. Translated by Philip Reuben.

As we’re getting a bunch of new ‘light novels for young women’ in a row lately, it makes sense that some of them tend to fall along the same lines, particularly given they’re mostly in the ‘romance novel’ template. So I expect those who are keeping up with J-Novel Club’s releases of these series will feel a certain familiarity when they see a book-loving eccentric noble whose intelligence is vastly underrated dealing with her engagement with a noble from a much more prestigious family. Fortunately, this book and Bibliophile Princess don’t share much more similarity than that. Marielle feels more like a Jane Austen heroine: savvy, intelligent, always observing, and content to stay out of the limelight. Unfortunately, like most protagonists of this sort, she has one big blind spot, which is her own self and her love life. And she has one big flaw: she’s a fangirl who can’t stop thinking about her beloved and his friends in trope-like situations and outfits. Oh yes, and she secretly writes bestselling romance novels. 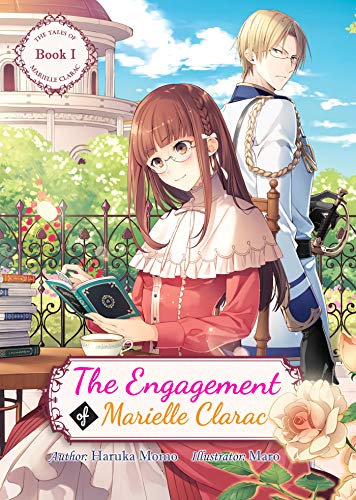 This relatively large book is divided into two sections. The first deals with Marielle getting engaged to Simeon, the heir to an earldom and friend to the Crown Prince. From her perspective, it’s rather baffling, and she assumes it’s been arranged by her family somehow, but she goes along with it mainly because Simeon, while handsome, has a rather severe face and wears glasses – in other words, she loves his type rather than him. That said, it turns out that he’s observed her far longer, and knows far more about her true self, than she is aware. The second, longer chunk of the book is essentially a mystery novel, as Simeon and Marielle go to an estate to help the young heir to an earldom (a different earldom) who is being attacked by hostile relatives. Oh yes, and the Mysterious Thief Lutin is also around, stealing from nobles. Will they run into him? And will Simeon hold that riding crop that Marielle loves so much?

For the most part I greatly enjoyed this book, so let’s start with a few flaws. The identity of the villain is glaringly obvious, though I suspect the reader is supposed to know who it is as well. For a mystery, there isn’t much guessing. Also, both Marielle and the author of the Marielle Clarac series like BL fantasizing to a certain point, but prefer straight romances and reassure their partner/readers that there’s no actual BL here, which can be annoying. That said, for the most part the book is excellent. Marielle is a delight, being both very smart and observant while also at times being a shockingly naive 18-year-old. Simeon is exasperated by her but also brings it on himself a bit by being unable to confess his true feelings to her (Marielle doesn’t realize her own feelings till late in the book, so she has an excuse.) There’s a subplot with Marielle befriending some sex workers which does not denigrate the profession at all, and they turn out to be her closest allies. And while the mystery is easy to solve, as a thriller it works fine, with some great set pieces near the end, including a mutual confession, which is good, as I did not want “do they really love me?” to be an ongoing plot point.

This is an ongoing series, but the volumes each have a different title a la Haruhi Suzumiya. If you like romance novels with a 19th century feel to them, I would absolutely give it a try.