I admit when this first came out, I was planning on skipping it. While I do read far too many light novels, my days of trying to read all the Vol. 1s are gone forever. And when J-Novel Club posted the first chunk on their site/app, it read like someone who enjoyed Arifureta but wished the lead was a bit whinier. But a couple of folks told me that it actually got pretty interesting, so I ended up checking out the first volume all the way through. And, while I don’t think I’ll be reading any further, I can confirm that it does get interesting, despite its extremely poor start, and ends up being more an examination of how to try to drag your way to improving yourself when you don’t have the resources that everyone else around you has. It also has a final reveal that is quite well handled. 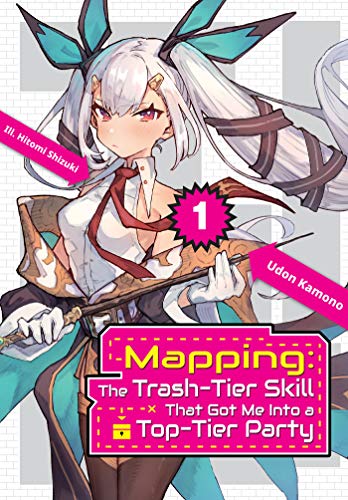 Our protagonist is Note. He and his childhood friend are getting the Skills that, in this world, can make or break your future. She gets three fantastic skills. He gets one Super Rare one that takes all three skill slots… and is famously known for being useless (there are two, much better mapping skills after this one). A year later, he’s been dumped by his childhood friend and is trying to join adventuring parties as baggage handler and getting drunk in bars. Then he’s scouted by a high-grade party who seem to have figured out a use for Mapping… it can handle mapping dungeons, which the other two mapping skills can’t do. Of course, he has Mapping, but he’s also a weak, self-hating guy, so the rest of the book is spent trying to get him in shape, teach him other, more useful talents for their party, and get him to actually stop acting like a wuss.

As I said before, the book starts off terribly, and I was also annoyed that we never got the perspective of the childhood friend that abandoned him, who reads as nothing other than a plot device. Things improve after he’s picked up by the Arrivers, the dungeon-crawling party that recruits him. The idea of taking months to train him up to do dungeon crawls (which are minimal in this first volume) is a good one, and we do see him slowly regain a sense of self-worth and show off quite a bit of cunning and self-awareness. The last quarter of the book has him trying to stop another one of their party, the sword expert, from leaving as he’s fallen in love with a girl. The classic “oh no, he’s fallen for the girl who has eight different men on the side” plot made me roll my eyes at first, but here we actually DO get her perspective later on, and her backstory, and while that doesn’t make her more likeable, it does work very well with the story.

The book has, beyond its stock low self-worth hero, more stock characters – our party leader whose dark past is no doubt waiting to be unearthed; the lecherous sword guy; a cardboard tsundere magic user (that’s her on the cover); and a dwarf girl who is there to fill the “I look (and act) underage but am not” slot. It improved in the second half, and if you like these types of characters, or “weakest becomes strongest” fantasies, this might appeal to you.