By Taro Hitsuji and Kiyotaka Haimura. Released in Japan by Fujimi Shobo. Released in North America by Yen On. Translated by Jan Cash.

Even the author knew what people were going to be thinking. In the afterword, he describes getting the premise from his editor and thinking that it had been done to death. The words “Fate/Stay Night” did not get mentioned explicitly, but the implication was certainly there. Actually, it appears the editor and publisher were really stepping up to the plate for this one. The author is known for Akashic Records of Bastard Magic Instructor, a very popular LN series with a manga out over here. They also brought in Haimura as the illustrator, who’s already busy drawing Index and DanMachi Sword Oratoria. All that and a series about a bunch of King Arthur wannabes fighting each other in a battle to the death to see who can be the Last Round Arthur (see what they did there?). The obvious flaw in this series is that it reeks at times, especially in the first half, of being written to be a franchise rather than a story. Fortunately, it gets better, especially in the last third. 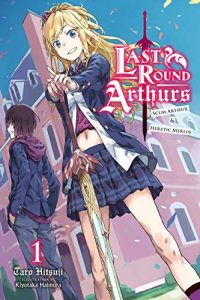 The premise is essentially Mallory’s Arthur legends meets Fate/Stay Night meets Haruhi Suzumiya. Rintarou is a young man who is perfect at everything he’s ever dome since he was born, which makes everyone think that he’s a monster – including his parents. He hears about a competition between those with the blood of King Arthur, a battle involving Kings and their “Jacks”, essentially a summoned Servant a la Fate. The winner takes over the world… which isn’t all good, as there’s also a reality incursion they’ll have to deal with. Rintarou wants in on this competition, and finds the weakest candidate – Luna Artur, a seemingly arrogant young woman who’s taken over the local Camelot High School and made it her plaything – and sold her Excalibur for cash. Despite thinking Luna is annoying and possibly bonkers, he becomes her vassal, mostly so that he can stop being bored with life. Of course, things aren’t going to be easy, as Luna’s childhood friend is fighting for the prize as well. And Rintarou also has a secret… which the title of the work may in fact give away.

Luna starts off as a weird mix of Haruhi and Gilgamesh from Fate, and it can make her hard to like until her true self shines through. In reality, she wants to see everyone happy and wants the power to achieve it. This does not mesh very well with Rintarou, who tends to be the pragmatic “let’s sacrifice their lives and sneak up behind the enemy” sort, but they eventually do get along quite well. I was less enamored with Sir Kay, Artur’s beleaguered Jack, but that’s the fault of the author, really – Kay is nice enough, but she’s Mikuru Asahina with a sword, and unfortunately I have no confidence she’ll rise above “comedy relief” in future books. The fights were well described and tense, which is good, as I think they may be the main reason people will read this. There’s also a few surprise revelations that AREN’T in the title, some amusing jokes, and some setup for the future.

When that future is I’m not sure – unlike the other July Yen debuts, Last Round Arthurs doesn’t have another book scheduled yet. It’s not fantastic, but it’s worth a read if you like modernization of Arthurian legend or just want a Fate book with the serial numbers filed off.