By Kumanano and 029. Released in Japan by PASH! Books. Released in North America by Seven Seas. Translated by Jan Cash & Vincent Castaneda. Adapted by Will Holcomb.

There’s a lot less focus on bear in this second volume of Kuma Kuma Kuma Bear, mostly because Yuna herself has gotten used to it – at one point she casually names something with a bear motif, showing that unconsciously she’s accepted that’s what she is now. Instead the focus is on Yuna and her general attitude towards everything. Yuna is, in both her own internal narration and dialogue, a grumpy girl with minimal emotional range, and we see lots of that here. That said, the point of the books is to show that Yuna, underneath that, is a caring girl with a heart of gold. Here she helps a nearby orphanage, employs Fina’s mother so that she doesn’t have to return to adventuring, helps save a village from a giant snake, and protects a newbie group of adventurers from a giant wolf. All in a day’s work for our overpowered heroine, who has a few moments here where she has to break a sweat and not simply overpower everything in her path… but only a few. 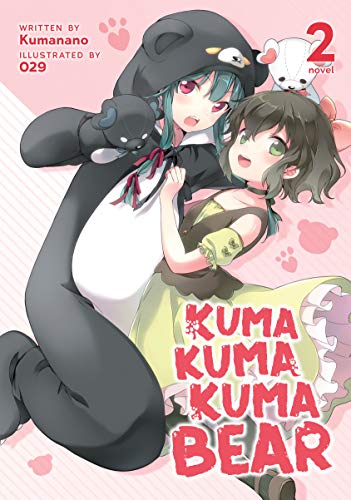 As with the first book, if the idea of OP heroes irritates you in any way, steer clear. Here not only does Yuna do awesome power moves to defeat strong monsters, including having an army of tiny bears made of fire march down the gullet of an enemy, she’s also learning cure and heal, so that she can be an all-purpose team all on her own, and also save Fina’s mom from her tragic ending. Other than that, though, Yuna doesn’t really have very many motivations in this book. The ending of the book indicates she’s going to the capital city of this world, and that might be a good idea, because she’s a bit unmotivated. We see her looking at several quests and rejecting them all as she doesn’t feel like doing them. It’s hard when you’re stuck in a rut only a few weeks after you arrive in your “trapped in a game world” world.

One interesting thing (in both good and bad ways) that was done here is the local lord of the Town, who Yuna meets in this volume. He’s a nice guy with an adorable daughter, but Yuna, having read far too many light novels in her old life in Japan, immediately thinks he’s going to be cruel and arrogant, with a snide, privileged son. This turns out not to be true… however, the lord *is* negligent, as we see when Yuna discovers kids begging on the street and a run-down orphanage losing its funding. Yuna is understandably furious, even as she fixes the problem all on her own (because of course she does). That said, it turns out the reason for all this is an evil aide and his evil family. The aide is REALLY evil – as in “kidnapping young girls, raping and killing them” evil. It’s tonally awful in a book that is supposed to be “cute girl in bear suit is awesome”, and I didn’t enjoy it, mostly as the lord, who was negligent in not noticing this, is very quickly forgiven. (The first book also had that mindboggling “so I paid my parents off till they abandoned me” moment, and it was just as jarring.)

Putting that aside, though, the book delivers what its readers want, though I wish Yuna’s stoic emotionlessness didn’t sometimes carry over to the actual prose. It will be interesting to see what a larger city does for our favorite bear.

By Kumanano and 029. Released in Japan by PASH! Books. Released in North America by Seven Seas. Translated by Jan Cash & Vincent Castaneda. Adapted by Will Holcomb.

First of all, despite expectations, there really aren’t many bear puns in this book. Even the title, which I thought was one, is “くま クマ 熊 ベアー” which is simply ‘kuma’ in hiragana, katakana, kanji, and ‘bear’ in katakana. It’s ‘Bear Bear Bear Bear’. The author, Kumanano, translates to “I’m a bear”. and the heroine, Yuna, appears on the cover wearing a bear onesie with bear gloves and bear slippers. I’m telling you this up front because if you’re already annoyed, best not to read this. It is absolutely saturated with bear. Despite what I had thought, Yuna CAN remove the bear suit if need be… but she’s as powerful as a 15-year-old human girl when she does. WITH the bear suit, provided to her by the God who runs this world, she’s ludicrously overpowered. Which tells you at heart this is sort of for fans of Make My Abilities Average and its ilk. Do you like teenage girls beating up jerks and monsters? You’ll like this. 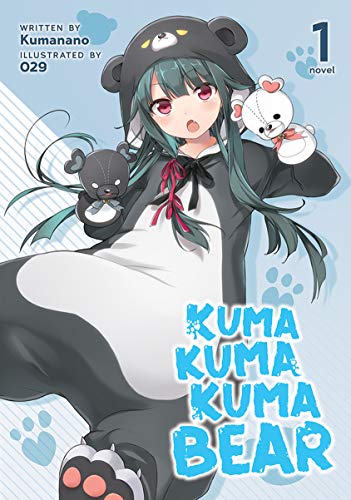 Yuna is a young girl who likes to game, sleep, eat,and not much else. She hasn’t gone to school ever since she found she can get rich working the stock market. Her parents briefly protested… so she paid them enough money to leave her forever. And they left! (I mention this because it jars very much with the overall tone of most of the book, and I am wondering if it will ever come up again.) Then one day, Yuna gets an upgrade to the game she’s playing, along with special equipment… the set of bear items. Then, she’s asked if she enjoys real life (no), if she has people who’ll miss her (no), and anything really important to her in reality (money). After this… again, try to contain your shock… she finds herself transported to a fantasy world that’s very much like the game she had been playing. In a bear onesie.

I spent a whole paragraph talking about the first 5 pages or so because the rest of the book is exactly what you’d expect. There’s stats (though not as many as Yuna would like, and all bear related), there’s guilds, there’s killing wolves and orcs, there’s mana gems, there’s jerk guys who look down on Yuna just because she’s a cute young girl in bear pajamas… this lasts until she beats him so much he needs medical attention. There’s also a cute girl risking her life for her family who Yuna essentially adopts as a little sister. Originality is absent here. That said, it reads quite well, and I was never bored, despite the same old things happening. The weakness may be Yuna, who tends to react with little emotion to much of anything, and thus can come off as a bit mean (shades of Potion Girl) or callous. That said, this book also lacks a lot of the bad habits of light novels, possibly as it has a female lead and is written for a female audience. There’s no descriptions of breasts, Yuna shows no signs of getting a romantic harem, and there’s no slavery. I appreciate that.

This is run-of-the-mill OP isekai, but unlike some others I’ve reviewed recently, its gimmick (bear) is handled very well, being funny and never really irritating. If you like bears, or just like young women walking around and being cool, this might be a good light read. Oh yes, and the illustrator also does The Devil Is a Part-Timer!, so if you like their work, also check it out.