I had honestly expected that Komi, like most manga I review, would get a Vol. 1 review and then go to the Bookshelf Briefs pile. Then those four chapters happened. In the aftermath of those, I got a number of folks reassuring me that this is as bad as it gets and that I won’t have another plot quite like this, which OK. All manga have growing pains, and if I read and supported Teru Teru x Shonen I can move past this. But Christ on a bike. In any case, let’s first discuss all the OTHER chapters in the book, which are cute and advance the premise. Komi tries ramen, Komi goes clothes shopping for the first time, Komi and Tadano share an umbrella in a moment that would be really shippy if I thought the series was going to move in that direction, which I don’t. It continues to build on the strong premise at the start, has some really funny gags, introduces two new “eccentric” characters who are not literal criminals… OK, yeah, let’s talk Ren Yamai. 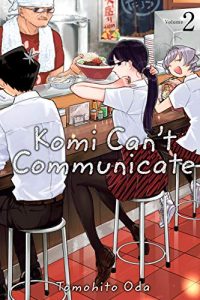 Here’s me in the review of Vol. 1: Likewise one of the minor characters in this book, Yamai, reads like a worryingly stereotypical psycho lesbian, and I really hope it doesn’t go down that road. Well, I was right to worry. The four chapters named “Ren” focus on Yamai, her obsession over Komi, and her realization that Tadano is in the way. She proceeds to kidnap Tadano and leave him tied in a chair in her bedroom while she goes to school to get closer to Komi. Later, after inviting Komi to her house (?!?!), she hides Tadano in the closet, then after he is found breaks down and confesses “I did it for you!” My teeth ground, my toes curled. The series wants to be funny overall, hence why Yamai actually invites Komi to her home like a numbskull – but she’s literally kidnapped and threatened Tadano – and still does after “apologizing”. It’s absolutely dire.

The really frustrating thing is that these four chapters also contain the BEST part of the book, which is Komi’s reaction to all of this. After discovering Tadano and hearing Yamai’s “explanation” for what happened, Komi’s “I decide who’s my friend” is a punch the air moment. Likewise the chapter afterwards, where Komi feels guilty for being the “cause” of all this, and tries to break off with Tadano only to have her own words turned back at her, is incredibly sweet and caring, and it would ALMOST be worth all the previous garbage if Yamai’s apology wasn’t an excuse to having her join the cast herd. She gets no real punishment for her actions, and seemingly integrates with the rest of Komi’s friends afterwards, with only one or two token “lol obsessed with Komi” jokes for the rest of the book. Honestly, she needed to leave the school and never be seen again.

So yeah, it’s one of THOSE volumes. You can’t even advise readers to just skip it, as the stuff with Komi and Tadano is the best part of the volume. You just have to read it while screaming and cursing. Not a good look for a lighthearted, heartwarming comedy about making friends.

When you get a basic description of this series, it sort of sounds like a few other “aloof beautiful girl at school is really just super shy” titles. But Komi is a bit more complicated than that. The Japanese title can translate as “Komi Has a Communication Disorder”, and we certainly see that here, as she finds it nearly impossible to speak in front of others, let alone interact with them. And that’s a shame, as she really wants to have friends – 100 friends, in fact, like the Japanese children’s song. Fortunately, she has some help when starting high school. Tadano is an average, nondescript guy – in fact, that’s what he’s aiming for – but he’s seated next to Komi, not only earning him the hatred of all the other guys in the room, but also meaning he’s able to notice that she’s trying hard but not succeeding. And so he vows to be her first friend – and help her make more. 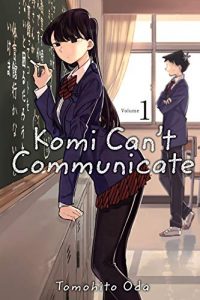 It’s not easy. Not only is Komi unable to properly communicate beyond writing on chalkboards, talking over the phone and the occasional babbling attempt to speak, but the school that they’re in is deliberately filled with “characters”, priding itself on individuality. This means even other introverts have a few eccentricities here and there. I’ll admit sometimes this works and sometimes this doesn’t. I liked Agari, who is a normal shy wallflower type, whose difficulties in talking to the class pale in comparison to Komi’s, but could have done without the “I’ll be your pet” gag ending to her storyline. Likewise one of the minor characters in this book, Yamai, reads like a worryingly stereotypical psycho lesbian, and I really hope it doesn’t go down that road.

There is also, however, Tadano’s childhood friend Najimi Osana. The most obvious of the pun-based names the cast all have, they are Tadano’s childhood friend. They are also non-binary. Najimi wore a man’s uniform and acted like a guy in middle school, is wearing a girls’ uniform and acting girly in high school, and is perfectly okay with this – and so is the rest of the cast so far, though Tadano has a few tsukkomi reactions to the whole thing. I’ve seen this sort of character in manga and anime before, but usually we the reader know what they gender assignment at birth is – not in this case. And that’s fine, as Najimi’s real role here is to be the super popular one with piles and piles of friends. This eventually includes Komi, though they get off on the wrong foot as Najimi finds Komi’s intense stare a bit terrifying.

In the end, though, this manga is about Komi. She’s moved a little further forward by the end of the first volume, but only a little – speaking to someone in person is still beyond her. I also love the way the art changes her face when she’s distressed or shy – she’s normally the gorgeous beauty, but her face turns wide and superdeformed when overwhelmed – which is nearly all the time. This was a fun series, and I look forward to following Komi’s growth.