how heavy are the dumbbells you lift?

I must admit, I’ve seen titles devoted to giving the reader a bunch of fanservice. I’ve also seen titles that are “instruction” manga, where they’re teaching a lesson to the reader, usually via an unknowing protagonist. But, aside from maybe Futari Ecchi, I can’t think of a title that’s managed to balance them fairly equally as much as How Heavy Are the Dumbbells You Lift?, a series that really wants to go into great detail about how to properly work out and gain muscles, but also really wants to show you that it has a bunch of cute, large-breasted young women who frequently bend over, take showers, get very sweaty indeed, etc. It should be terrible, but somehow you get the feeling that, if asked to choose one, the author would jettison the service in favor of the lessons. (They wrote a long series about muscular men, Kengan Ashura, that supports this – though to be fair, if you like heavily muscled men, they are in this title.) 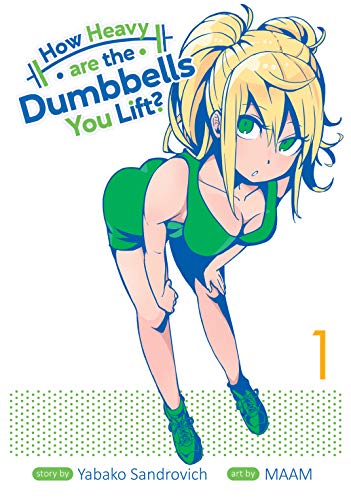 Hibiki is a high school girl who loves to eat, to the point where she’s getting a bit too chubby for her uniforms and swimsuits. She tries running… and gives up. Exercise at home… failure. Clearly she needs something more regimented. So she goes to a local gym. There she is surprised to meet the student council president, who is also there for gym membership. Hibiki, who feels a bit uncomfortable (she’s a “gal” sort, Akemi is the “pure” type), and notices the gym is filled with muscular men being beefy, is about to bail, but then she sees the instructor, Machio, who is a total bishie!… at least till he takes off his jacket, then he becomes a poster boy for beefcake. But Hibiki is smitten anyway, and, with Akemi and Machio helping her, she gradually begins to gain muscle mass (though she’s not losing weight yet) and learn the ins and outs of keeping in shape.

To a large degree this is a comedy. Hibiki is good at reacting to extremely silly situations (she also lampshades the fanservice frequently, even though she’s the most frequent body used) and noticing things like Akemi’s muscle fetish being disturbingly sexual, as well as the fact that Machio’s upper body seems to be a TARDIS. But the advice on weight training really is quite good, and I actually learned a thing or two. Plus, while there is an awful lot of fanservice, it doesn’t ever descend into mean-spiritness, and as I said earlier, the author wants to draw the girls working out just as much as looking hot. We also do see their muscle mass – Hibiki’s friend Ayaka looks at first to be the “normal” one in the group, then it turns out she’s part of a boxing family. (Speaking of which, Hibiki’s own undiscovered strength shows she might want to lean in that direction as well.)

It’s definitely for the male reader, make no mistake, but compared to what I was expecting, I found the first volume of this dumbbell manga to be rather interesting. I’m definitely going to be reading more.