high school prodigies have it easy even in another world

By Riku Misora and Sacraneco. Released in Japan as “Choujin Koukousei-tachi wa Isekai demo Yoyuu de Ikinuku you desu!” by GA Bunko. Released in North America by Yen On. Translated by Nathaniel Thrasher.

I really have to hand it to the writer of this series, they know how to keep a reader’s attention distracted. There’s romantic subplots (none of which are going to go anywhere given the nature of Tsukasa, but hey), there’s political intrigue, there’s starting a revolution by starting a religious movement, there’s a big-ass fight (literally in some cases) near the end of the book, and there are even moments of pure horror in a “welcome to our totally average town, weary travelers!” sort of way. And then you get to the end of the book, and you realize that the entire thing was incredibly dumb and full of holes, with one plot getting dropped so fast that I’m concerned my digital book was missing a chapter. Last time I said that this series is popcorn, which is very true. You eat it and enjoy it, but if you want an actual meal, look elsewhere. 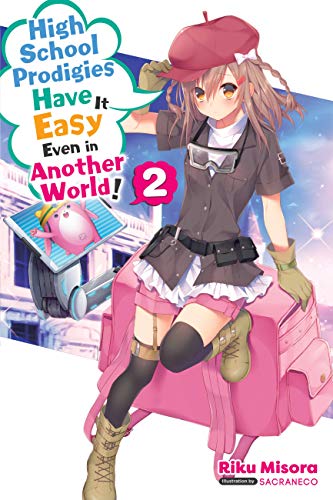 Unlike the manga, the light novel covers are allowed to have more than Lyrule on the cover. Here we see Ringo, who doesn’t really do much here besides build power plants and get really jealous of Tsukasa and Lyrule’s relationship. Life is tough when you’re the unlucky childhood friend. The book deals with the aftermath of the coup that has happened. There’s a lot still to achieve. They need to figure out a way to unite the people regardless of class. They need to figure out ways to keep up their modernizations. And they need to worry about the neighboring Duke, who is made entirely of fury and condescension, and also has a magic firebomb that can take out a city. Even Shinobu, who is traveling towards the capital to try to get the lay of the land, runs into trouble when she gets to a village that is glad to eat her — I mean, meet her.

I will say one thing, which is that the book’s message of “the rich hate everyone else and will happily watch them die purely for entertainment” is a very 2020 mood, even if the book was written five years earlier. It tries to distinguish between “normal” nobles who are just rude assholes and “evil” nobles who are doing things like raping and murdering, but it doesn’t quite get it. Shinobu’s subplot is good and also quite dark… but then gets resolved so fast, and dropped so hard, that, again, I worried a section was missing. And then there’s Aoi, who in the grand finale volunteers to help a guided missile reach its target (a magic spear of fire) by running along side it… then hitting it with her “honed glutes” to get it to change course… then smashing her “sizable breasts” against the missile’s air vents to get it to change course AGAIN. The scene is so dumb your jaw drops, and sexist as hell, but you have to admire the bravado of writing it at all. I imagine this must have been something to see animated.

So yeah, this book is dumb but highly readable, provided you are not troubled by plot, or characterization, or thematic unity, or overt fanservice.

By Riku Misora and Sacraneco. Released in Japan as “Choujin Koukousei-tachi wa Isekai demo Yoyuu de Ikinuku you desu!” by GA Bunko. Released in North America by Yen On. Translated by Nathaniel Thrasher.

There are series where you want to concentrate hard on the worldbuilding, characterization, and moral quandaries. And then there are series that you want to read like popcorn, where you are not in the mood to think hard about anything. If you want one of the latter, then this new LN series is right up your alley. Thinking too hard about anything going on in this first volume, from its questionable “heroes” to its tendency, as with so many other light novels, to have its villains be the worst of the worst in so many ways, to its annoying White Man’s Burden viewpoint of isekai, you will probably end up finding this series quite annoying, especially as I don’t think it’s doing anything interesting with any of those issues. If you just sit back and enjoy the isekai candy and cool fights/schemes, then it’s a hell of a lot of fun. Check your brain at the door. 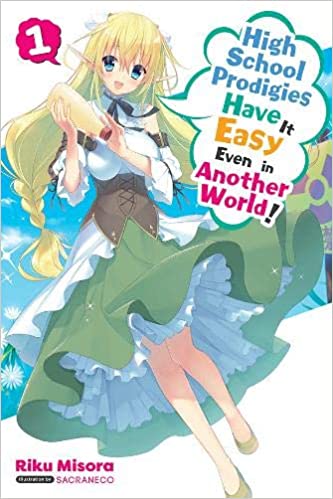 The gimmick here is that it’s an isekai times seven. Seven of Japan’s most powerful people, who are all teenagers and all friends, are swept away while on a plane trip to another world. We meet stereotypical samurai Aoi, morally terrifying doctor Keine, cowardly magician Prince, introverted inventor Ringo, arrogant businessman Masato, Prime Minister of Japan (in high school) Tsukasa, and “journalist” Shinobu, whose specialty is really being a ninja. Some of these are, obviously, more important than others in this first book, which focuses on Masato (in this volume) and Tsukasa (likely for all of them, he seems the “primary hero” sort). We also get Lyrule, who is the elf who is on the cover. She’s sweet, has a mysterious past, has a great figure, and she and Tsukasa bond almost immediately. In any case, this book focuses on them settling in with the village that rescued them and saving it from the local nobles, who are Very Bad Guys.

The author is also the writer of Chivalry of a Failed Knight, which is for magic academies what this is for overpowered isekai. Which is to say, the author wants to play in a fantasy world playground. There’s lots of ridiculous fun in this, from Ringo being able to build a nuclear power plant from scratch in about three months to Masato taking down the monopolistic trade company in the space of ONE DAY, to basically everything Shinobu says or does. (Who are secret ninja always named Shinobu?) We get a sense that each of the prodigies has their own tragic past – Tsukasa revealing his own father’s embezzlement leads to abandonment by his mother, and Masato’s father killed himself due to lack of money. I’m sure more will come in later volumes. And there’s also a lot of fun action sequences here as well, mostly due to Aoi, who is so terrifying bears run away from her, but also Tsukasa, who turns out to be well-protected against assassin’s bullets no matter what the world.

This series will, I anticipate, always be ethically suspect and have a tendency to fall apart if you look at it closely. But I had fun reading it, and will definitely get the 2nd book.

I’ve talked before about whether we’ve reached isekai critical mass in terms of the sheer number of titles. If you went by message boards and forums, you’d think the trend was long over and that fans were desperate for something else. But from what I understand, sales don’t really support that – in fact, they seem to support the opposite, and it’s “anything but isekai” that is suffering. That said, I certainly understand feeling a little burned out by the variations on a theme. This new title, based on a light novel (unlicensed here in North America) hits a lot of the standard fantasy isekai buttons, and reminds me quite a bit of Realist Hero. But the very title itself implies that there will be a minimal amount of conflict, and warns the reader in advance that these are not your “average harem hero” isekai students – they’re top tier. OP is what they have for morning coffee. 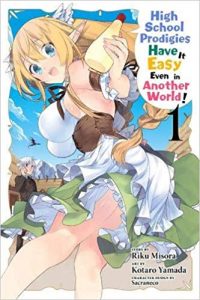 We’re briefly introduced to the titular group in their own element – seven teen geniuses who between them control most of Japan. They also all know each other from school, which is why they’re all together on a plane that has a fateful plane crash. When they wake up, they’re in another world, with magic and dragons and overendowed elf girls like the one on the cover, who is absolutely not one of the teen geniuses, but she’s cute, right? They’re not sure if they can get back, but looking around at the poor farming village and the folks who saved them from the wreckage, they are sure they can do something to repay them by bettering their life. But they’ll have to deal with tributes to the local lord, and bandits, and merchants who control the economy, and (inevitably) slavery. Can they turn things in their favor? Easily.

As you’d expect in a series supposedly starring seven kids, not all of them get focus here. Also unsurprisingly, it’s two of the guys who get the bulk of it in this first volume. Tsukasa is Japan’s prime minister (yes, he’s still in high school) and seems the “sensible yet compassionate bishonen” sort, and is also clearly being romantically paired with the elf girl, as if the “I’ll feed you by mouth” wasn’t obvious enough. There’s also Masato, a genius businessman who’s the perfect person to help the village sell their wares and not knuckle under to gougers. They’re both likeable types, but they’re also very obviously types, not people yet. As for the others, the only other one who makes an impact is Shinobu, the reporter/ninja girl who’s there to be perky (and also punish Masato when he reveals she isn’t a virgin, in a tired gag that is nevertheless the best gag in the book). This is very much a first volume, and we’re waiting for more depth.

I suspect I might have enjoyed this more in prose, but it’s all right. If you’re looking for another isekai with cute girls, this is perfectly serviceable. But like its premise, it promises absolutely nothing to the reader who dislikes overpowered heroes who cruise through everything. That is what these kids are. But they invent mayonnaise, so we’re good.