I admit that at first I did not get the double meaning in the title – before reading the manga, the reader might think that ‘Hi’ is a simple affectation, sort of like saying ‘U’ instead of you. But as you get to know the two leads, with each chapter beginning with Haruo running into Akira in one arcade store or another, you get the impression that it’s also meant to be “Hi, Score Girl!”. Because these two can’t get away from each other – at first by accident, and gradually as the book goes on by choice. They come from completely different backgrounds, but are united in their need to escape their daily lives, and also their skill in any number of games. What’s more, the series clearly takes place in 1991, and so this is also a massive nostalgia-fest for the games of that era – especially Street Fighter II. Those who read other manga (Hayate the Combat Butler) may be surprised that the titles and characters are uncensored. Well… there’s a lawsuit behind that. But it all worked out in the end. 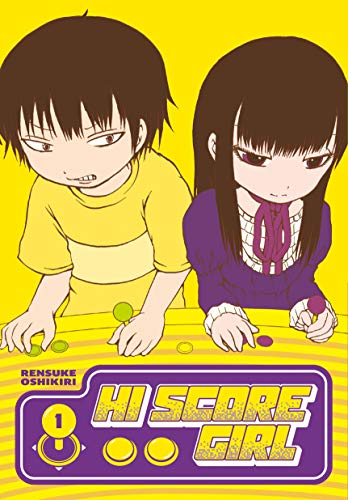 Both kids are twelve years old, though the end of the volume implies there may be a small timeskip coming. Haruo is your standard loser kid with bad grades – in fact, ludicrously bad grades… given his skill at games and his excellent analysis of other people, I have to assume these zero tests are exaggerated for comic effect. Disliked by most of the class, his sole respite is the local arcade (yes, remember, it’s 1991… though he does have a small game system at home). There he plays games… mostly Street Fighter but you will see others as the volume goes on. And meets Akira, a rich girl in his class beloved by everyone. Why is she playing Street Fighter II? Why is she so GOOD at Street Fighter II? She’s not about to tell him, as she doesn’t speak. The manga is not clear about this, but I think it’s meant to be inferred that she CAN speak, but does not because that’s the way this manga rolls. That’s fine, for although she’s supposed to be a stoic little princess, Haruo brings out the worst in her… and also, eventually, the best.

The artstyle is a little odd, which lends itself well to amusing faces, especially from Haruo, who gets punched in the face, kicked in the balls, hit by a car multiple times… he’s basically there to get beat up. But he’s an understanding kid at heart, despite his jealousy about gaming scores, and rapidly understands that Akira’s intense drive to do arcade gaming masks a very lonely girl whose home life is pretty much rigid and arranged for her. The two slowly bond, as she brings him things from school when he’s home sick (and then plays on his home system) and the two are dragged with their classmates to an amusement park (and get so absorbed in games they lose everyone else… which, trust me, is a good thing). They even explore what turns out to be a haunted arcade. Sadly, by the end of the volume, just as we’re seeing burgeoning tween love, she’s moving to America, and flies away. But not before a tearful airport farewell. The end!

…OK, not the end, there are nine more volumes. The preview implies Haruo will move on to middle school (somehow… I assume you can’t get held back in elementary school) and meet a new girl who seems to really like him. That said, I assume Akira will be back. In the meantime, enjoy this sweet and funny ode to the arcade games of yore.