hero is overpowered but overly cautious

Though they share few similarities except for being comedies, I was reminded quite a bit of My Next Life As a Villainess while reading this 3rd volume of a series that was clearly designed to be two volumes long. Bakarina struggled for several volumes to try to find a way forward, and this volume of Cautious Hero does the same. That said, Cautious Hero has a lot more to walk back; at the end of the second volume Rista has been told who she is, and who Seiya is, and their destiny. Even better, when Seiya is called forth as a hero once more at the start of this book, he remembers what happened, and seems to actually return Rista’s feelings! Sure, they have to save the world, but he’s powerful, she’s a goddess, they’re in love, it’s great, right? Wrong. No one is reading the series for that. And so, sure enough, by the middle of the book, love has been trodden on and Seiya is using Rista as a comedic punching bag again. Know what your audience wants. 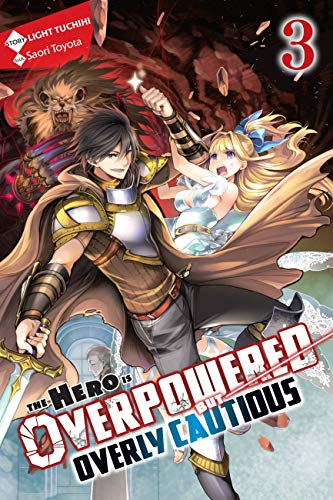 Those who read the first two books, or saw the anime (popular enough to get the two leads a cameo in Isekai Quartet’s second season) will be surprised at the cover art, showing a grinning, not-at-all-cautious Seiya charging forward. It’s the start of a long line of bad things happening to Rista. An enemy hits Seiya with an amnesia stat, meaning he’s back to his old reckless personality… and his love for Rista has gone down. Then, after more plot stuff happens, he loses the amnesia and is back to being Seiya… but thinks of Rista as an annoying weed. Yes, we’re back to baseline there. Honestly, it’s probably for the best, as this world is, as promised, much worse than the previous one. Humanity is not only enslaved but eaten, and the beastmen rule supreme. Seiya has to rescue the slaves in the old town they used to be fron, then he has to infiltrate the palace guard and take on the lion-headed big bad, Grandleon.

Does the book succeed at walking everything back? Partly, I’d say. Some of Seiya’s treatment of Rista, while horrible, does cross the line into funny, particularly his use of her as a periscope. The reader is, I think, meant to infer that his feelings for her are not rock bottom but that he’s faking that stat… but if so, he’s really good at it – even the old Queen at the end takes back her “he loves you deep down” speech after he’s appalling once more. Where the book does succeed, as always, is with Rista, who does not remember her life as Tiana, but that doesn’t stop it emotionally affecting her, particularly when she finds Tiana’s mother held prisoner and being tortured. Rista’s frustration and resolve waver constantly throughout the book, but at the end, her honest exhortation to Seiya actually gets through to him and makes him do the right thing. It was nice to see.

Of course the world’s not saved yet, and even stronger bad guys are on the way. Fans of this series had better be prepared for more of what the anime did best – comedy slapstick violence. That said, there’s enough character development in Rista to make this a series still well worth reading.

This is very much a book of two halves. The first half is very much like the first book. They’re still trying to fight demon generals, Seiya is still rude and appalling, Rista is still screaming at him (and also lusting at him), etc. It’s funny, though not as funny as the first book, and I am reminded why I thought it would be hard to sustain over a long series. Then halfway through Rista realizes, as they head towards a major battle, that Seiya did NOT say “I’m perfectly prepared”, and everything turns very dark very fast. Normally that would be a disaster in a series like this, which is supposedly a lighthearted comedy. But in this case it’s so well-handled and emotionally draining that I have to applaud. We also get Seiya’s backstory, which I had suspected earlier, and it makes sense. And we also get Rista’s backstory, which was far more of a surprise. You will forgive the lack of humor. 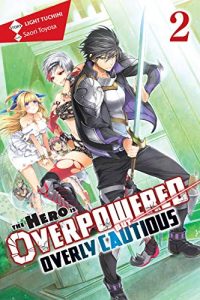 This is not to say that the front half of the book is not funny. It might actually be better animated – the anime is airing as I write this, and there’s something about Seiya throwing Rista around like a rag doll that cries out to be seen and not read. We meet Rosalie, and if I said “daughter of the emperor and swordswoman” you can probably guess her entire personality from there. She and Seiya clash immediately, and he’s far more obnoxious towards her than even those who know Seiya are expecting (the reason for that comes later). Seiya needs to learn some more new tricks, and so gets bow and arrow training from a very thirsty goddess (making Rista jealous) and additional training from the goddess of Destruction, which involves being naked in bed together (and leaves Rista infuriated).

But then comes the second half, and I will try not to spoil everything but do have to talk about some things. You know that things are taking a turn for the dark when you see an old man cheerfully holding his wife and child’s severed heads in a bag, and it has to be said that Seiya is undone more by humans turning bad than demons. He then tricks Rista and the others into staying behind while he fights the Demon Lord by himself – because (as I’d guessed), this is not his first isekai, and in a previous world he was far more typically charge ahead and get things done so as to save the most people. The horrifying result of this means that he tells his future summoned self (who does not have memories of this) to be super, super cautious about everything. Fortunately, Rista finds out about this, and the ending, while relatively tragic, is also inspirational – the “I’m perfectly prepared” line will leave a lump in your throat this time.

This book feels like it could have ended here very nicely. The world is saved, but Seiya is “dead” and Rista needs to be punished for using her goddess powers on full blast to help him, a forbidden act. They are thus sent back to Seiya’s first world, now a hellish nightmare run by the Demon Lord. The series does go on, of course, though I’m now less concerned with whether the author can keep up the madcap humor as to what happens when he returns to it. Still, props to this excellent second book, which is not nearly as funny but very emotionally satisfying.

As I was reading this book, the one thing that came to mind over and over was that this was aimed squarely at the KonoSuba crowd – at least here in North America. It’s not QUITE accurate to describe it as “KonoSuba if Aqua were the narrator”, but it’s probably a decent starting point. Ristarte is a young, somewhat shallow goddess whose job it is to summon heroes and assist them in saving worlds. This time around, though, the world she has to save is in need of a very, VERY strong hero. So she summons Seiya Ryuuguuin, a handsome Japanese man whose stats are much better than the other starting heroes. It does say that his personality is “overly cautious”, but Rista just glosses over that. As it turns out, he IS a very capable hero… it’s just that his personality is appalling, and, as we said, he’s overly cautious. Will he even bother to save the world? And will Rista go bald before he does? 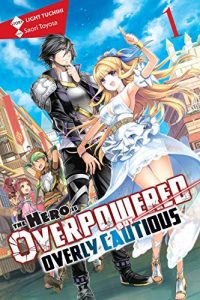 First things first, if you hate tsukkomi, drop this title right now. About 90 percent of it is 1) Seiya does a thing; 2) Rista screams “Why are you doing the thing?!?!” over and over again. This can get a bit irritating after a while, and honestly I would normally wish that Rista would simply be quiet and accept Seiya a bit more… except he really does inspire shouting. He’s not socially inept per se, but he doesn’t care about politeness of niceties, and his paranoia and need to be prepared have led him to attack allies just as much as he does enemies. He’s not a very likeable person, and you can absolutely see why Rista is the narrator. That said, she’s a bit flighty herself, and also frequently pauses to imagine herself and Seiya in a romantic mood, as he is quite handsome. But just being around Seiya for more than five minutes will tell you this isn’t going to happen.

The humor is mostly character-driven, which is good. There are a number of other goddesses that show up, including one who hints that Seiya’s past may not just be “typical Japanese guy” (in fact, we learn absolutely nothing of his past). There’s also two dragonborn teens whose job it is to help the hero on his quest and also grow and get stronger… except Seiya is so ludicrously strong that they’re reduced to carrying his things, which crushes their spirit. That said, there are hints that Seiya is not, in fact, a complete monster, he’s just completely unable to frame an action in any way that makes him look kind of helpful. (The author hopes to develop this in the second book, showing that they are well aware of how exasperating it can be.) There’s enough here for me to try a second volume, but I do feel that the Cautious Hero was more exhausting than humorous at the end of the day.

And I will admit, sometimes when he says “I’m perfectly prepared” he does look a bit cool.