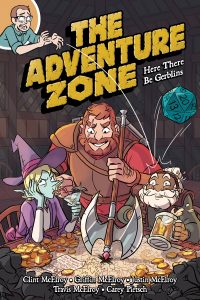 I’m a newcomer to The Adventure Zone podcast (only 24 episodes in at this point, so no spoilers, please!) but quickly fell deeply in love with it. My timing was good, actually, because it just about coincided with the release of the graphic novel based on the first arc of the podcast’s first season (also known as the Balance campaign). Initially, I thought I’d simply enjoy the graphic novel instead of reviewing it because the podcast is so important to me. It’s been a really tough year and The Adventure Zone made me laugh and gave me something new to feel enthusiastic about, and for that I will be forever grateful. Happily, however, the print adaptation is just so damned good that I find I have to talk about it!

The Adventure Zone started as a special episode of the McElroy brothers’ long-running and much beloved podcast My Brother, My Brother and Me, but proved so popular that it became a series in its own right. Summed up by eldest brother Justin McElroy as “the story of four idiots that played D&D so hard that they made themselves cry,” it’s the story of a human fighter named Magnus (created by Travis), an elf wizard named Taako (created by Justin), and a dwarf cleric named Merle (created by the boys’ father, Clint) who find themselves working for an organization that’s trying to round up and dispose of dangerous magical relics. They’re guided by youngest brother Griffin, who serves as Dungeon Master and portrays a fantastic array of NPCs. The improvisatory results are hilarious, profane, and wonderfully endearing. And, eventually, capable of evoking tears, though I haven’t gotten to that part yet. I love that the family known for a goofy advice podcast started The Adventure Zone as a lark and ended up creating something genuinely moving.

The graphic novel adaptation is not a word-for-word copy of the podcast. Most of the out-of-character moments have been omitted, and what remains almost reads purely as a fantasy story, except that Griffin occasionally pops in to request perception checks or give out inspiration points, which reminds readers that there are unseen players behind the characters on the page. It’s a neat way to focus on the world the McElroys created without completely shutting them out of it. Some of the dialogue is different (though many favorite quips have made the cut) and some of the names are different (licensing issues, one assumes) and a couple of pivotal events play out a bit differently, but the feeling is the same.

Plot-wise, at this point in the story the trio of adventurers is doing a job for Merle’s cousin, Bogard, who has hired them to convey some of his belongings to another town. Along the way, they come upon evidence that Bogard and his bodyguard, Barry Bluejeans, have been abducted by gerblins. Now our heroes must save them! Along the way, they discover a mine renowned for its mystical ore, an evil drow named Magic Brian who is after something particular that our heroes can’t seem to make out, and an orc woman named Killian who is so impressed by their skills that she takes them to meet her employer. Also, Taako gets a cool umbrella staff! (Really, Taako is the best.)

What’s neat is that, given that the McElroys started working on the adaptation after the Balance campaign concluded, they’re able to add some foreshadowing along the way, like a certain character’s cameo appearance or a seemingly very significant pause when Killian’s boss sees the guys for the first time. (I haven’t finished Balance, so I don’t know what this is foreshadowing, but I’m sure it’s something!) Too, Carey Pietsch’s art (so fun and expressive throughout) includes some in-jokes for McElroy fans, the most adorable travel montage ever, and a dramatic reveal that literally gave me goosebumps. I especially appreciated getting to actually see Magnus engage in various foolhardy exploits. This volume ends with a teaser for the adaptation of the next arc—Murder on the Rockport Limited—and I’m really looking forward to seeing how Pietsch depicts Magnus’ more inspired feats from that adventure.

Ultimately, I’d say that the podcast is funnier, whereas the graphic novel presents a more cohesive story. Both are fantastic, and I recommend them heartily. Lastly, I’ll close with this excellent fan film made using audio from the podcast. If you’re not familiar with The Adventure Zone, this will give you an idea of the lovable silliness that awaits.