genius prince's guide to raising a nation out of debt

I had a lot of fun with the first volume of this series, and am pleased to report that I liked the second volume even better. For one, it’s a relief to be living in a world of political intrigue and mind games, one where our protagonists actually are people born in that world and have not been transported from modern day Japan. There is no adventurer’s guild… or indeed adventurers at all, nor do we appear to have any magic. It’s just a series with a clever young prince and his clever aide doing battle (at least in this novel) with an equally clever princess from the strife-torn Empire, still dealing with the death of its Emperor that we heard about in the last book. It feels a little bit like an episode of Blackadder if everyone were as clever as he was. There’s even a minimum of light novel cliches – the readers get a scene of the main female cast in a hot springs, but Wein is absent doing paperwork – no accidental peeping here. These are adults. 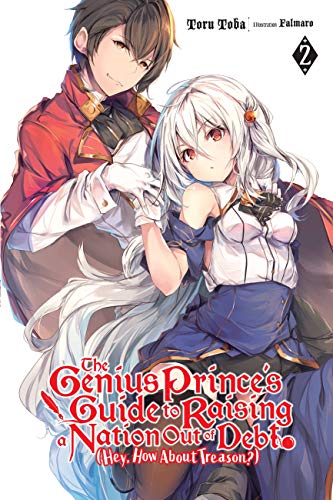 As noted, the main thrust of this volume is that Wein’s kingdom is visited by the 2nd Princess of the Empire, Lowellmina, who rumor has it is looking for a political marriage. As it turns out, she’s someone both Wein and Ninym have met before, though they were unaware that she was a princess. Wein correctly guesses she has another plan behind the public one, but has trouble figuring out the REAL plan she has behind the second one. She, meanwhile, is also trying to see what he does and how he reacts, relying on his being exceptionally clever to keep the ball rolling along. In among this we have the usual political crises. The Empire is trying to figure out which of the three sons of the Emperor should be in charge. Two territories in Wein’s kingdom who have always been at each other’s throats are coming to a boiling point. And a lovestruck, foolish son of an aristocrat from a neighboring nation may cause everything to fall apart for both Wein AND Lowellmina.

I mentioned in my last review that the best part of the book was the relationship between Wein and Ninym, and that remains the case. At the moment, it’s impossible for anything to happen between them, mostly as Wein is a noble Prince and Ninym is a non-noble from a race that many countries are severely prejudiced against. I suspect that will change before the series ends, because let’s face it, Wein and Ninym have been “married” for years now, in terms of closeness and knowing each other’s hearts. Lowellmina is also a great character, not as overdramatic as Wein can be when things go wrong (there’s some amusing faces in the illustrations) but still cut from the same cloth. There’s also some fun scenes showing Wein and Ninym at the Empire’s military academy from two years prior (which is where they met the in-disguise princess), and I’d love to see more from that period as well.

Certainly I’d recommend this for fans of series like Realist Hero and other kingdom-building books, but also for those who enjoy a light novel series without having to make excuses for half of the events that take place in them. Glorious fun.

While the word “treason” in the title is technically accurate, I feel that it might do a disservice to the genius prince, who is not nearly as bad as that title makes him out to be. Sure, he wants to pass the leadership of the country off to someone else, and is totally fine with that someone else being another country, but this does not mean he’d do it if it meant that the people in the country would suffer. Instead this book is along the lines of a few other LNs featuring “genius” characters, who are always brilliant but not quite brilliant enough to stop misunderstandings or prevent things happening elsewhere that destroy their clever plans. Which is good, as otherwise Prince Wein might be insufferable. As it is, he’s a pretty likeable guy, though it helps that he has a beautiful childhood friend/aide who is willing to stick potatoes up his nose when he screws up. 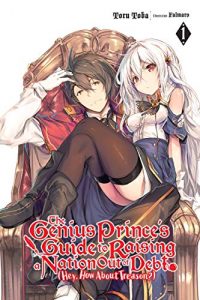 In the mountainous and remote Kingdom of Natra, the old King is dying, and the Prince Regent, Wein, is running the country. To his subjects, court, and little sister, he’s the perfect thoughtful and intelligent King. To Ninym, his childhood friend, and only Ninym, he’s a whiny selfish brat who desperately wants to slack off and be lazy but can’t because he’s a Prince with a country to look after. He tries making overtures towards the Empire that controls half the country to take it over… then the Emperor dies and that goes south. When a neighboring country invades, he tries to have a quick little war that will end in negotiations, but that goes south in a hurry. Even holing up in a newly conquered gold mine just means finding out that it’s nearly out of gold. Fortunately, Wein really is brilliant. He’ll need that brilliance.

This ended up being a lot of fun. For one thing, we’re in a “medieval kingdom” sort of world that does NOT appear to be filled with magic and monsters. There are the Flahm, a race who seem to be regarded as slaves by some other countries but not in Natra, as Ninym is a Flahm and treating her as a slave would… not be advisable. I was expecting elf ears or similar, but it looks like “albinism” might be the only difference. I was also pleased to see that, despite Wein occasionally taking note of the large-breasted Imperial Ambassador, this does not really appear to be a harem series at all. Ninym clearly loves Wein, and worries about whether he feels the same. Given that he literally has people killed who belittle or insult her, I think that might be a clue, but hey. They make an awesome power couple even if they’re not a couple, and their back and forth is the main highlight of the book. (Future book covers also feature only the two of them, meaning we’re unlikely to have a “stack up a new heroine every volume” syndrome many LNs have.)

If you enjoy warfare and politics but are sick of isekai and gaming-style fantasy worlds, this book may be the perfect antidote. It’s fun and entertaining.