By Type-Moon and Shiramine. Released in Japan by Ichijinsha, serialized in the magazine Comic Zero-Sum. Released in North America by Kodansha Comics. Translated by Kevin Gifford.

Sometimes you really have no choice but to do a series of spinoffs. Fate/Grand Order is huge, the visual novel/game that everyone is playing on their phone or tablet these days. Well, everyone but me, of course, as while I started it, and liked the visual novel aspects, the”pick these cards and see if you win” part drove me nuts. That said, I like to think I have enough of a passing familiarity with Fate in general that I’d have no issues with this. It does approximately the right things, adapting the start of the game, where you as a player (you’re male in this adaptation, because in general Fate adaptations don’t go the yuri route) arrive at a top secret facility for a top-secret mission, assisted by your new friend and possible love interest Mash. Sadly, halfway through the book everything blows up and you end up in a Fuyuki that’s had the Grail War go horribly wrong. Unfortunately, this is also about where the manga loses me as well. 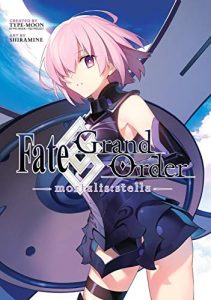 Some of the problems seem to be things I suspect I’d have issues with in the original as well. Mash is a fairly passive, bland female protagonist, some of which is explained seemingly by her origins, but we don’t really get into those here. She turns out to be a Servant of some sort, but doesn’t seem to be the Saber or Archer sort. She needs the sort of development that you get in a visual novel which can use 20 hours of text to go deeper, and she’s not getting that here. Likewise Ritsuka is a ‘you are the player’ sort of protagonist, which means that he’s also fairly bland, as PCs never have much personality so that the reader/player can overlay themselves on them. He’s sort of Shirou-esque at times, minus the complete lack of self-worth. Perhaps most aggravatingly, a death scene that I think is meant to be both horrifying and tragic is so confusing, and the person being killed got so little attention, that it ended up being “what just happened?” more than anything else. Sorry about the black hole, Olga. Whatevs.

It’s not all bad, of course. Lancer is here and is awesome, though amusingly he’s not Lancer, but Caster. (I suppose I should call him Cu Chulainn instead, really.) He grumbles several times about this totally not being a class he’s best at, and I can’t blame him really. On the bright side, he’s also missing Lancer’s tremendously bad luck stat, meaning he’s allowed to be competent and do things. It’s also nice to see Archer (erm, EMIYA, I guess) and Saber Alter (Arturia Alter?), who are there to show off that this is a Fuyuki gone wrong. And we get the first of the main reason a lot of people play Fate/GO, which is too see famous historical figures as hot babes. Leonardo da Vinci is pretty hot. Honestly, if this were 9-10 volumes long, like Fate/Zero or Stay Night, I’d be more inclined to cut it some slack. But it ends in Vol. 2, and as a result I’m not even sure it was worth starting. Play the game instead.