By Nao Wakasa and ICA. Released in Japan as “Hibon, Heibon, Shabon!” by ArianRose. Released in North America by J-Novel Club. Translated by C. Steussy.

I have talked before, and no doubt will again, about the fact that one of my favorite types of light novel is the kind that has, as its plot and character archetypes, not one original bone in its body, yet somehow still manages to win you over with the sheer power of good writing. I enjoy it so much because a) let’s face it, the old and familiar is like that hoodie that you always wear around the house – it’s your comfort food, but b) it shows the author has the skill to make you want to read more. This especially applies to the latest in a long line of shoujo light novels from J-Novel Club’s Heart imprint. I love that we’re finally getting so many light novels for women rather than men, but let’s face it, introducing a dozen or so of them in the space of about five months has been a bit wearing. So we start with a story about a common girl with a dull magic power who can SAVE THE WORLD! 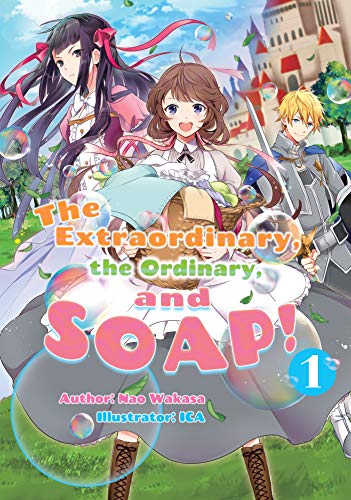 The title in Japanese – Hibon, Heibon, Shabon! – is snappy and rhymes and is, unfortunately, nearly impossible to translate so that it does the same thing in English. Shabon is soap, and that’s what our heroine Lucia can do – her powers make soap bubbles that can clean even the most stubborn stains. After the death of her mother leaves her with a pile of debt, she moves to the king’s castle to find work as a laundrywomen and enjoys a fun, ordinary life – including having lunches with Sir Celes, a cute and handsome knight. Sadly, he’s away when the castle is attacked by horrible monsters one day, but Lucia, desperate and terrified, casts her soap magic on one… to find it suddenly calm and placid. Turns out her magic is a lot more than removing stains from clothing, it can also apparently remove the horrible mental and emotional stains from people. So she’s sent off to join the Sacred Maiden, who has been transported from another world to… wait, what?

Yes, the best part of the series, easily, is that this is in fact an isekai, but the girl who is transported from Japan is only a supporting character. Maria is supposedly the deus ex machina that will save them all, but things aren’t going very well. And actually, I tell a lie, because the best part of the series is the subtlety in its writing. As an example, Maria is shown to be selfish and horrible whenever we hear about her, but after Lucia a) hits her with Soap a few times to clean her clothes, and b) talks to her like a normal person rather than a savior of the world, Maria gets better. (Somewhat.) Is it Lucia’s magic or is it Lucia’s talking her down? It’s left open. The scene at the castle when the monsters are attacking is also expertly handled – there’s a real sense of terror from both Lucia and the residents of the castle, and it adds to the sense of depth in the books. As for the relationship between Lucia and Sir Celes, it’s cutely handled so far, and I liked that we added a bunch of other hot young/middle aged guys to the cast and Lucia is interested in precisely none of them – in fact, she thinks “is this what it’s like to have a dad?” with one big bruiser.

Good writing, a clever take on isekai, only a little fanservice (Lucia is somewhat busty, which is mentioned once or twice), and a winning heroine. Best of all, it’s only three volumes long, so there’s not a huge investment. And you’ll absolutely have to get the next book, as this one ends on a nasty cliffhanger. Very pleased with this series.