executioner and her way of life

This series continues to go back and forth between things I quite enjoy and things that kind of irritate me, and in this book they’re about fifty-fifty, meaning it gets a reluctant recommendation. There’s far less Akari in here than I’d like, though her scene with Momo was the highlight of the book, and promises good things for the book after this. We also get an amusing new addition to the cast, a colleague of Menou’s who seems to be a airheaded flirt, though it’s implied throughout that this personality is a front. Which is a shame, as I liked it better than the personality that showed up later. There’s lots of cool fights, all of which seem to point to the value of “being pretty good at everything because of working really hard” rather than “has an innate natural gift”. Which I’d appreciate more if it was not undercut by the implication that the supposedly hardworking woman is in reality Very Special Indeed. 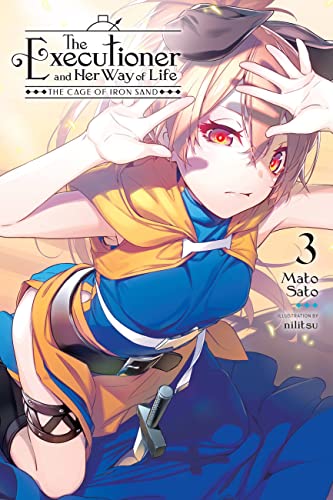 Menou and Akari are making their way through the desert, which turns out to be another area that was completely devastated because of a Japanese isekai gone horribly wrong. Things start off badly as Akari has already been kidnapped as the book begins, and Menou has to infiltrate a criminal organization to rescue them. There she runs into an old colleague from the orphanage, Sahara, and the three of them proceed to a nearby oasis city, with Menou now having to suffer the attention of *twp* bokes. Arriving at the city, she and Momo get the help of Princess Ashuna, who is essentially in this book to be cool and not much else. Unfortunately, she and Menou have to fight off a dangerous crime lord, so Menou sensibly leaves Akari back at the hotel. Which ends up being the biggest mistake she makes in the book.

The problem I have with Sahara is likely down to the character skewing away from my tastes. I really like the ‘sleepy ditzy flirt’ sort of character, and when Sahara is revealed to in fact be a ball of jealousy and envy, I wonder what the point was in having her be likeable for 3/4 of the book at all except to annoy me. Then again, when the reverse happens – i.e. when Akari gets her suppressed memories back – I actually tend to like her more, so hey. And yes, everyone is angry at Menou for being ‘the chosen one’, and Menou keeps insisting that she’s not all that great and is just a fairly normal person, which is fine except it’s pretty clear that she’s also got a past that’s been completely suppressed. Which just makes me more annoyed.

Basically, it’s hard to like anyone in this series because they could turn into something completely different down the road. I know that “change is a process” is the theme of the books, but there’s a bit TOO much change. Right now, Momo is my favorite character because she’s at least consistent. That said, sure, I’ll read more.

Also, naming the new character in your desert-themed book Sahara is kind of like naming your dog Spot.

The second volume in this series picks up right where the first one left off, with Menou and Akari arriving in the Port City Libelle. Akari is here to have a vacation, Menou is here to try to kill her, and makes an attempt, but it fails as the others have. More worryingly, the terrorist organization we saw on the train in the first book has also got a hook into this city, and it appears to actually have the approval of the royal family – or at least the royal princess, who seems somewhat… detached from life. Menou’s not getting any help from the Church – they loathe her. The fight-loving princess finally meets her, but, unsurprisingly, just wants to fight. And Momo is doing her best to help, but things might be a little more difficult than any of them had assumed. Why is one of the four Human Errors out of her fog prison? Why does she know Akari? Even more chillingly, why does she know Menou? 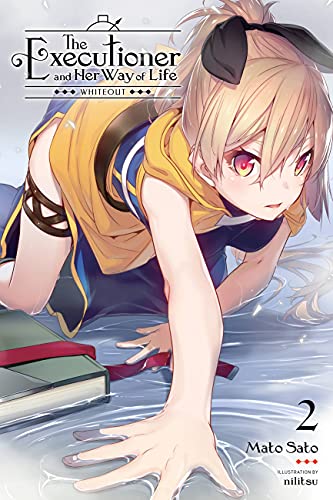 So, first of all a warning: while this is not quite as bad as, say, Roll Over and Die 4, it is a very gore-filled and violent book. Pandæmonium is our villain here, and she’s a little girl who can essentially resurrect herself from her own body and blood – meaning that she can be killed endlessly and literally crawl out of her dead body. This is, needless to say, disquieting, both as a concept and as prose. She’s a classic type – the killer little girl – but that does not make her any less difficult to deal with. Akari’s own subplot is also rather chilling, as we get a lot more time in the head of the original Akari, the one who is not an airhead (though both are in love with Menou – indeed, that’s pretty much the one trait they share). The revelation from Book 1 is gone into further, and I wonder if a happy ending is truly possible for her – or if death is the only solution.

Not that the world has really had a solution to the isekai’d heroes before. We don’t get much more backstory, and a lot of it is filtered through Pandæmonium, who sees everything in terms of a movie, but it’s pretty clear there’s more going on here than just “the four human errors turned evil and were all destroyed”. For one thing, the one who put them down has also vanished from history… maybe. We get hints here and there as we go through this book that Menou’s past is tied to the human errors more than she’s aware of. (She’s also mostly figured out what Akari is doing, so it’s not simply making her ignorant on purpose.) As with the first book, everything ties back to her mentor Flare, who she gets her nickname (Flarette) from. Good news! They may reunite soon! That is the end of the good news.

Apologies for being somewhat oblique, but this is the sort of book that runs on mysteries, and I’m not ALWAYS a giant spoiler factory. If you’re reading this for the yuri, you may be disappointed – it’s there but isn’t a focus. If you’re reading this for lots of cool action, dark mysteries, and a bit of existential horror… OK, more than a bit… then this should serve you quite well. If you got off the Roll Over and Die train after Book 4 caught up to Japan, pick this up.

As we see more and more deconstructions of the basic isekai light novel and its tropes, it’s inevitable that some of those deconstructions are going to involve “isekai is bad, really”. Yeah, taking a young, immature Japanese man and dropping him into a fantasy world with monsters and magic, where he inevitably starts plotting how to “invent” mayonnaise and miso soup, is not necessarily the best decision one can make. Indeed, this is not even the first book we’ve seen in English with this plot, as Isekai Rebuilding Project already wandered down this road. That said, this world is pretty hardcore about stopping it. Isekai’d Japanese people, in the past, have created horrors of apocalyptic form. There’s no stopping them, all you can do is put them out of their misery. And, well, if you have to kill them before they even gain access to their powers, well, this is a sacrifice that will have to be made. This book is about one of those killers, and the girl she can’t kill. 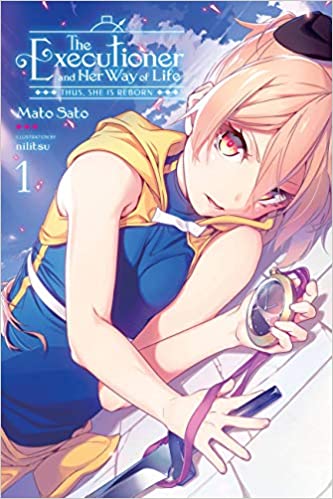 We are introduced to Menou, the titular executioner, when she meets a young man who was brought to this world from Japan… and then promptly kicked out. Not spoiling much, but… he is not our hero. Menou fills that role. The heroine is actually Akari, the girl who was brought to this world at the same time, and who Menou also kills… but Akari can control the element of Time, and this the clock rewinds her body back to being unhurt. She also doesn’t seem to remember Menou doing this, so Menou continues to pretend to be helping her while, in actuality, leading her to the Church, which apparently can do a better job of wiping her out. She’s helped by her assistant Momo, who is basically Shirai Kuroko from Index in pink, and, albeit inadvertently, by Ashuna, the princess of the royal family who started this whole mess. That said, Menou will rapidly find that there’s far more going on here than meets the eye.

Getting the bad out of the way, this book’s afterword sells itself as “grimdark”, and it’s not kidding. There’s lots of dead and eviscerated people in this, Menou’s backstory verges on terrifying, and the ending implies that the entire series may end in a tragedy. And, because this is a Japanese light novel, we’ve got to have lots of talk about Akari’s big breasts and art of them being big. This ends my negative comments. Everything about the book that is not those two things was fantastic. The magic system is well thought out, and integrates nicely with the world’s religion. The characterization of the four leads manages to make them all obvious “types” that anime fans will be VERY familiar with, but then also turn around and give most of those people (Ashuna does not get much to do here, to be fair) a depth that also works the way a good mystery does – after reading the ending, you want to go back and read the start again. When we first meet Akari, there’s a bit of her own narration that is 100% at odds with everything we get for the next 150 pages… until the climax, when it all comes together and you go “OOOOOOH!”. Love it. Even Momo, who I was sure would be the one character that irritated me throughout, gets a touching backstory, an actual reason for her behavior, and a terrific romantic afterword, though I have bad news for her if she hopes to be best girl.

So yes, definitely recommended. Even the title and subtitle have a sense of “grand epic” to it. Oh yes, and there’s also a tinge of yuri to it, so folks who enjoy that will also want to read it. Plus, anime coming soon! Basically, get in on the ground floor of this one.