It occurred to me as I was reading this second volume, and glancing at most of the color pages, that this was written to be serialized in Dengeki Hobby, a (now defunct) magazine devoted to fans of the plastic model kit. It therefore should come as no surprise to me that the book is a lot more concerned with the Evas and how they function than the inner workings of the actual cast. There are some moments where that’s not the case – Misato’s grief at Kaji’s fate here is well handled, as is her quick recovery, and Shinji’s raging grief in his attack near the end also rings true. But as I watched everything get worse and worse and worse, it occurred to me that the problem with this continuing on from the end of the original TV series is that there’s no way to back up and get much of what the start of the TV series had – fun. It’s a very interesting continuation, but it lacks joy. 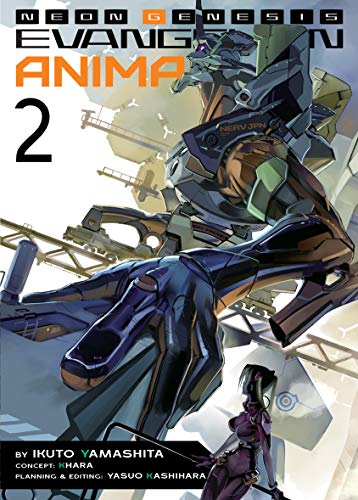 Of course, there are very good reasons why fun is in short supply. This is an apocalypse narrative, continuing straight on from the first book, and there’s simply no time to settle down and have a penguin raiding your fridge. Shinji and Super Eva (I will never get used to that name) are trying to fight against a mind-controlled Hikari and her German Evangelion; Misato and Toji are trying to hold down the fort back at base, despite her getting kidnapped midway and his worrying about Hikari; the Reis are all dealing with the death of Cinq in various healthy and unhealthy ways, and Quatre is still a very troubled soul; Kaji stops Kensuke from putting on a possessed mask and losing his identity by… doing it first (yeah, I dunno either); we get the fabulous and somewhat bonkers adventures of Asuka… ON THE MOOOOOON!; and there are far, far more people turned into pillars of salt, to the point where you will get sick of the phrase.

Of these subplots, Asuka had my favorite, showing off a lot of smarts, gumption, and pure survival tactics. Despite this, she loses most of her hair and almost her existence; it takes Hikari and Shinji calling out to her to give her an identity again, and even then she’s… well, let’s leave that as a spoiler. Shinji, aside from his RAGE near the end, does not really get time to do much soul-searching as he’s constantly on the run and fighting; at one point he has Maya in his cockpit, and later on Rei Trois, but this Shinji is made of sterner stuff. Of course, he may have a few issues continuing on after the events in this book as well. And there is a LOT of apocalypse imagery – in addition to the pillars of salt, there’s ancient animals coming back to life and killing people, natural disasters killing people, the Lance of Longinus killing people… if you’re a resident of Earth in this book and aren’t part of the main cast, it doesn’t look good for you.

As I said, this book is quite interesting, and I do want to see what happens next – especially as they’re running out of disasters and we have three more books to go. But, as someone who never really cared about the giant robot battles in Evangelion, it can be a bit of a slog.

There have been so many spinoffs of Evangelion that it’s hard to keep track. In addition to the original TV series, the long-running manga, the current series of reboot movies, the video games, the manga based on the video games, the manga based on Episode 26’s “what if Eva were a dull harem anime” gag, the manga as a bizarre murder mystery, the gag anthology, the manga based on the gag anthology… in fact, it’s a bit surprising that one of the few spinoffs we haven’t seen is a continuation of the original. Now, granted, the original did sort of end definitively for most of the cast. But these light novels, which were serialized in the late 00s – early 10s, throw the last two episodes out and ask: what would happen if the Human Instrumentality Project failed, and it’s now three years later? The answer is more attacks, the return of some Angels, some very well-thought out battle sequences, but something missing at its core. 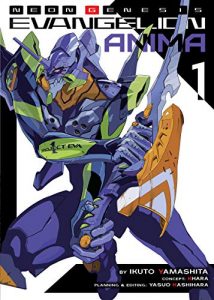 Three years later, Gendo and Ritsuko have disappeared and Fuyutsuki is retired, so Misato is in charge of NERV and the Evas, which are still around. Toji now has artificial limbs, and is working for NERV. Asuka has matured and is at peace with herself. Theoretically Shinji has as well, but as we find out many of the same struggles he had in the anime continue to plague him. Maya has apparently dealt with the loss of Ritsuko by turning herself INTO Ritsuko. And then there’s Rei. Actually, there’s four Reis. The plot kicks off when one of the Reis goes rogue and the others have to figure out why and what’s going on. As they do, we find the return of the mass-production Evas, now with Angels inside them, also seemingly attacking. Shinji dies (he gets better), the Lance of Longinus is once again terrifying, and almost two million people – including Hikari’s older sister – turn to salt, because what’s Evangelion without Biblical allegory?

The main issue I had with this book, I think, is that it doesn’t really settle down and take a breath at any point. The new characterization of the regulars could be interesting, but it never really gets a chance to do much before we’re plunged into the next battle – indeed, one of the Reis has a heartwarming talk with Asuka that would be fantastic if it weren’t the Evangelion equivalent of saying that she’s retiring tomorrow and has bought a boat. Likewise, I’m all for Asuka gaining maturity and peace, but there’s not really a lot explaining how it happened except for one or two token paragraphs, leading to the reader sensing that Asuka is more mature just because the authors didn’t want to write her as constantly angry. On the bright side, the plot is somewhat interesting if you don’t mind apocalypses, and the cliffhanger promises some interesting betrayal going on, though again we’re not actually given any details as to what happened.

Honestly, a lot of this reminds me of the old Evangelion continuation fanfics that were written about 20 years ago, throwing out the ending and doing their own thing. It only lacks the Original Characters the author inevitably threw in. I think Evangelion fans might like it – particularly those who like the mech aspect of the series. I just wanted a few more scenes of the characters hanging around and nothing much happening so that we could appreciate their being older and wiser(?).

For the most part, if I have reviewed any of the endless Evangelion spinoffs at all, I’ve reviewed them as Briefs, mostly as for the most part it’s very difficult to try to work up 500+ words on the topic. The Evangelion manga is excellent, but its spinoffs and side stories have amounted to a creepy shoujo supernatural comic that barely felt like Eva at all (Campus Apocalypse), a Lowest Common Denominator romantic “comedy” (Shinji Ikari Raising Project), a mystery with BL overtones (Detective Diary), *another* lowest common denominator romantic comedy (Angelic Days, if anyone remembers it), and various gag anthologies. This new title is definitely on the “gag anthology” side, being a spinoff of one of the stories from the Evangelion Comic Tribute that was popular enough to get its own series. 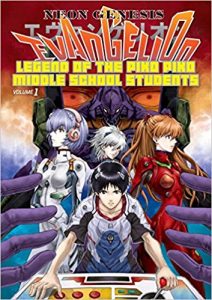 In my review of the Comic Tribute anthology (which I guess I did give a full review to), I noted that the stories by these creators were the best part of the book, so it makes sense that they’d get a chance to add more wacky humor and dense references. The “plot” is mostly irrelevant, but essentially we see NERV trying to defeat the Angels by training gaming nerds to defeat them, and Shinji, Asuka and Rei are the three biggest. What follows is a string of gags, both visual and verbal, which range from average to quite good, though I don’t know that I laughed out loud. Characterization is, for the most part, exaggerations of the “fanon” view, so Shinji is a bit meek and overserious, Asuka’s angry all the time, Rei is stoic, and Kaworu is super gay. But above all else, there’s the boke/tsukkomi comedy we’ve come to expect from Japan, and everyone (well, OK, just Shinji and Asuka) are quick with the retorts.

Those with an observant eye may note that Carl Horn adapted this himself, and it’s very much an adaptation in the nature of his Excel Saga work, i.e. he takes the original and crafts it into something else. If you like overly literal translations, you’ll hate this, but for the most part it works out very well, especially as the original is there to help, being filled with fourth wall breaking, bizarre gaming references, and stupid running gags (it’s just a t-shirt!). Adapting manga that’s solely devoted to comedy can be tricky, but they do a good job. Of course, the drawback is that there is only comedy here – if you like Evangelion for literally anything other than gags, you’re wasting a purchase with this. But the comedy is finny, everyone is exaggerated but not totally loathsome (except Gendo, of course), and the fanservice is surprisingly minimal, something actually pointed out by the characters as they lament their lack of a beach episode. Piko Piko Middle School Students is here to crack dumb jokes and chew bubblegum, and they’ve run out of bubblegum.