By Suzu Enoshima and Eihi. Released in Japan as “Tsundere Akuyaku Reijou Liselotte to Jikkyou no Endo-kun to Kaisetsu no Kobayashi-san” by Kadokawa Books. Released in North America by J-Novel Club. Translated by Mikey N.

It’s interesting to come across a series where the villainess ends up being one of the less interesting parts of it. Don’t get me wrong, it’s fine; it was highly enjoyable seeing Lieselotte stubbornly embarrass her way towards happiness. But once you get her schtick, as the “gods” Endo and Kobayashi point out, there’s not much more still to say, at least not in this volume (the last chapter of the book is another story, and tells me she may play more of a role next time). But I was more interested in the ways that this ordinary villainess story is also somewhat broken. From a heroine who feels like she belongs in Hatoful Boyfriend to a game that seems to be encroaching in the real world. And then there’s Endo and Kobayashi themselves, who manage to also bring an achingly sweet school romcom vibe to the book. This series has a lot of balls in the air, and it’s fascinating for that reason. 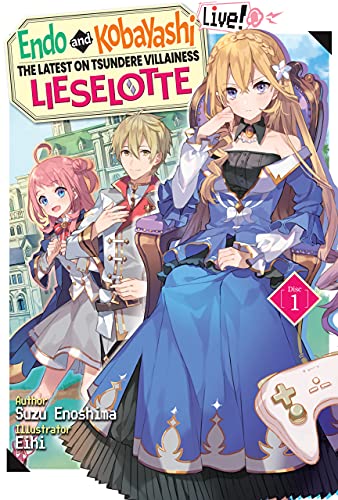 You know the drill. There’s this girl. Rich, haughty, princess hair. Badmouths the heroine at every turn. Doomed to be possessed and killed towards the end of the game. Even her fiancé is tired of her… until he hears the “voice of the gods”, explicitly pointing out that everything she’s doing is a classic tsundere move to cover her embarrassment. Suddenly he starts to realize how cute she is. As for the gods themselves, Endo is a high school kid whose athletics injury has left him rudderless, and Kobayashi is the upbeat broadcasting club girl who turned his life around. She’s obsessed with the game that features Lieselotte, and has gotten Endo to play it as well. However… the game seems to have taken on a life of its own. The prince can now hear their spoken commentary on the game. And they’re worried that if they screw up, bad ends will result.

As I said, Fiene is probably the character I enjoyed most in this. In the normal, non-broken game she’s a standard otome game heroine, who gradually gets stronger as the routes go on. Here she’s a broken powerhouse of a girl who can easily beat up terrifying monsters in order to gorge herself, as monsters = food. And once she too figures out Lieselotte’s deal, the two of them are cutie patooties. Meanwhile, Endo and Kobayashi, who have wandered in from another genre, are just as fascinating as their otome game counterparts, and their burgeoning romance, which neither of them dares call attention to, is adorable. That said, running into what appears to be a character from the game in real life puts a damper on their first date, and you get the sense that things are about to get even more bizarre. I suspect that the Witch trying to possess Lieselotte and the God (actual God, not high school teens gods) wandering around their world will up the stakes a bit.

This is not the sort of premise that you can extend out to multiple books, so it’s a good thing that the series is only two volumes long. It’s a good one to read even if you’re not really an otome game villainess fan.