True to its title, this is the second half of the story that began in the second volume. The Legion now have a massive Railgun that they used to destroy 40% of the Federation’s forces. Given that the Federation lacks Kamijou Touma, they need to defeat it by more military means. Fortunately, the railgun was slightly damaged when it was dealing out masses of deaths, so there’s time to send a strike force. That said, the chance the strike force survives and takes out the Railgun is basically 0%. It’s essentially a suicide mission. And so, as you likely guessed, it’s time to send out the 86, who are not fitting in well with the other soldiers and don’t seem to want to retire somewhere and grow potatoes. It’s very much a “if you love war so much why don’t you MARRY it?” sort of attitude, and our heroes just sort of shrug and get on with it. They’re the only ones who can really do this anyway. But will they have help? 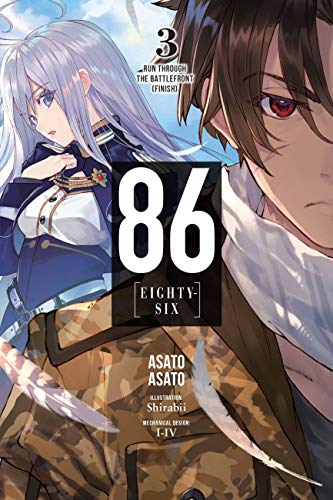 As you might expect, a great deal of this book is very grim. We see soldiers with wives and families tragically blown to bits, and drivers shielding their superiors and ending up as corpses. There’s also the 86, who are, as is pointed out, still children, but we’re not really in a position in this war when they can avoid using them. They want to try not to be like the Republic… but when things go badly and someone has to be sacrificed, it’s all too easy to go with the ones who everyone already pities, especially when they’re so… well, stoic. Especially Shin, who in this book contrasts himself with Kiriya, one of the Legion’s main forces but still with memories of Frederica, his “princess”. We get POV from both of them in the book, and near the end Shin realizes that the main difference between them may simply be that Shin isn’t dead… something he’s not confident is a good thing.

Fortunately there is a bit of… well, I won’t say humor, but less bleak stuff here. I did laugh out loud at the reveal halfway through the book. We all knew it was coming, but it’s still really funny seeing every single one of the 86 (yes, including Shin) scream “ARE YOU AN MORON?!” at the same time. We also get the appearance of Lena, who has been fighting a losing battle against the Legion on her own end, and ends up meeting with Shin at the final battle with the Railgun. Neither one know who the other one is, though Shin eventually figures it out. It’s a reminder at how good Lena is at strategy, and I look forward to her actually joining the main cast again after this. She’s also a reminder that Shin actually was more emotional and occasionally smiled in the first book, something we haven’t seen at all in this two-parter. Frederica has helped, to be sure, but maybe Lena is just what the 86 need – someone who accepts them without pity.

The author has said the next book will be lighter in tone, something I don’t believe for a minute, but it should at least be another one-volume book. In any case, if you enjoyed the first two book in the series this is still a very good read. It’s not quite as good as the first, but that’s a high bar.

Fans of Lena, the star of Vol. 1 of this series, may be disappointed, as this is not a sequel to the previous book but an interquel – it explains what happened to the rest of the squad between when she last saw them and the epilogue, and thus Lena only appears at the start and end in a “she’s still in the Republic” sort of way. That said, this is still a very good volume of Eighty-Six, combining the mechs and battle scenes with more look at warfare, what makes us fight, and how even well-meaning people can try to impose their own wishes on others. It’s not as unrelentingly bleak as the first book, but it’s not a laugh riot, either – Eighty-Six will always be about as serious as its male lead, Shin, who may be with a different army but still has some of the same problems. And then there’s the Legion, the enemy soldiers whose attack near the end of the book feels like they’re trying to cause our heroes to simply give up in despair. There’s a lot of them. (Well, they are Legion, after all.) 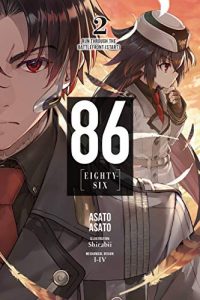 The girl on the front is Frederica, who is a “mascot” for Shin’s unit, the Federation Army’s way of getting troops to bond with each other by giving them an adorable kid to look after. It’s not clear if this is actually true or not – Frederica’s the only one we see, and her situation is certainly one where a great cover story would be needed – but in any case, she fulfills some of the role Lena did in Vol. 1, attempting to get the other Eighty-Six to think about something besides fighting until they inevitably die. At least she’s just trying to get them to consider it, though – their main benefactor, Ernst, after rescuing them from certain death, is ready to have them retire and become good little civilian boys and girls, and is appalled when they all, to a man, decide to re-enlist. The trouble is that not only have this group been soldiers so long that anything else seems deeply off, but they know the Legion better than anyone else, and won’t allow others to take up that fight.

The Federation is better than the Republic in many ways, so there’s less explicit racism here towards the Eighty-Six, but that does tend to mean that it’s implicit. The soldiers are unnerved at both the Eighty-Six’s combat prowess (particularly Shin) and their stoic demeanor, and use the word “Eighty-Six as a slur several times throughout the book. “Monster” also comes up, and it’s clearly a point of tension that the Eighty-Six could have chosen to retire and never fight again. That they’d fought enough. But is it enough? The Legion are attacking in greater and greater waves. Where do you draw a line that says “that’s fine, you can leave it to everyone else now”? Especially if you’re Shin, with his seemingly psychic connection to the Legion.

This series continues to be what it was in the first book – unrelentingly grim but not despairing, and making me want to read more even if it is depressing much of the time. As you can tell by the subtitle, this is the first of a two-parter, and I suspect by the end of Book 3 we’ll be back to where we were with Lena reuniting with everyone.

I have a certain reputation for being a softie, and will freely admit that I drop series sometimes just because I find them too bleak and depressing – in fact, see my review of WorldEnd a few months ago. But sometimes I get a book that, even though it is unrelentingly downbeat and cruel, I end up enjoying far more than I thought, simply because the writing is so damn good. Such a book is 86, a blunt look at war and racism seen from an alternate universe that seems eerily close to our own at times. It examines how easy it is for people to fall into hatred and murder, how being idealistic and thinking something is wrong is not really enough when you’re in a position of great privilege, and the constant physical, mental and emotional strain of being a disposable soldier whose “leaders” want them to die. I was depressed while reading most of the book, but I absolutely could not put it down. It’s stunning. 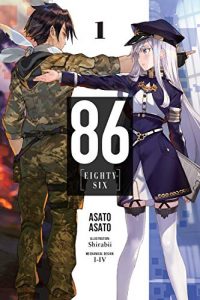 The Republic of San Magnolia is at war with the Legion, weapons of the Empire. Fortunately, they have unmanned drones to fight the battles for them! Unfortunately, their technology isn’t great, so their “unmanned” drones are manned by the Eighty-Six. There are 85 Sectors in the Republic, and it decided to take all those who weren’t “pureblood” and put them in an 86th, which is essentially a concentration camp, and send them out to fight the war. They’re not people, after all, just subhuman pigs, so it doesn’t matter what happens to them. Our story follows Lena, a young idealistic “handler” who thinks this is wrong, but also thinks that she can do something about it by virtue of forcefully making her point. She’s assigned to a new group of Eighty-Six, the crack squad who are on the front lines preventing an invasion of the Republic. Unfortunately, her squad is getting diminished by the day. And they have no respect for her. And the enemy are horrifying.

This is absolutely a book with an agenda, make no bones about it. It’s about human dignity and rights, and how easily everyone can throw away someone else’s for their own. The technology of the “Legion”, which is a bit higher than the Repiblic’s, allows for a truly terrifying scene where we see what has happened to many of the 86s who have died in battle, and it causes Lena to have a bit if a screaming fit. There’s also several scenes where Lena has her hypocrisy and privilege pointed out to her in the most caustic of terms, and she’s the one who grows the most in this book, to the point of sacrificing almost everything – but not her ideals. Despite being unrelentingly grim, the book somehow avoids being cynical. I honestly felt it was a one-volume series till the very end – it was apparently written for a competition, so had to be self-contained. (It won.)

I hate to repeat myself, but I don’t think I’ve been this blown away by a first volume in quite some time. If you are tired of isekais, or tired of fascism, or just love good prose, and don’t mind a lot of death and degradation, 86 is absolutely a series you should be reading. Highly recommended.