Dungeon Builder: The Demon King’s Labyrinth Is a Modern City!. By Rui Tsukiyo and Hideaki Yoshikawa. Released in Japan as “Maou-sama no Machizukuri! ~Saikyou no Danjon wa Kindai Toshi~” by Overlap, serialization ongoing in the magazine Comic Gardo. Released in North America by Seven Seas. Translated by Elina Ishikawa-Curran. Adapted by Julia Kinsman.

My Room Is a Dungeon Rest Stop. By Tougoku Hudou and Takoya Kiyoshi. Released in Japan as “Boku no Heya ga Dungeon no Kyuukeijo ni Natteshimatta Ken” by Takeshobo, serialization ongoing on the online site Web Comic Gamma. Released in North America by Seven Seas. Translated by Wesley O’Donnell. Adapted by Kim Kindya.

After reading both of these titles I decided to review them together. Yes, they both have ‘dungeon’ in the title, but more than that, they’re both clearly catering to the exact same audience: light novel fans who enjoy fantasy manga, or in this case adaptation of light novels we don’t have licensed over here. They both have suitably generic male leads – one may be a demon lord and the other may be a schlub in a tracksuit, but at the end of the day they’re not why you’re reading this. And there’s also plenty of fanservice. Which is why folks are reading this. 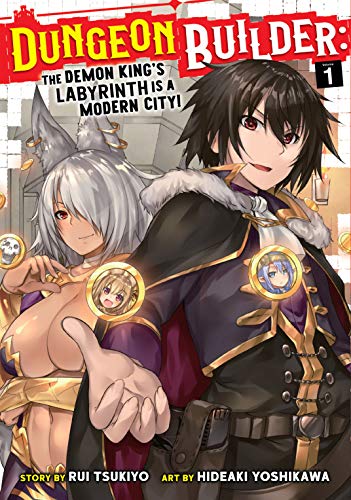 Dungeon Builder might be an isekai – we do see the new Demon Lord has lost his memories but knows what guns are – but the isekai part is mostly irrelevant. Procel is new Demon Lord of Creation, and has to create minions and dungeons that feed on people’s despair and fear. As the flash forward at the start of the book tells you, however, he is too nice a guy, so decides to make his dungeon the happiest place on Earth. It’s not clear yet how he’ll do this – the first volume doesn’t get too far into the story. He’s joined by Marcho, his busty demon lord mentor (that’s her on the cover) and two cute minions, both of whom look underage (something cheerfully pointed out by Marcho, who nicknames him “Lolicel”. This has slightly less service than the other title, and might develop into something interesting, but also seems to run on cliche power – his rival Demon Lord of Wind is a classic tsundere with shaky self-esteem that shows as arrogance. There’s also a dwarf girl who ticks the “rei Ayanami Expy” box. 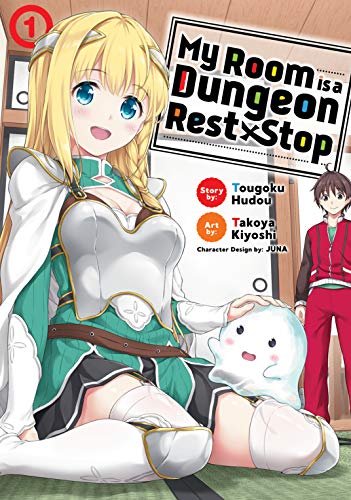 My Room Is a Dungeon Rest Stop is more of a reverse isekai. Our hero Touru (Why? What that romanization now for that specific name? Don’t get me wrong, I was an ‘ou’ fan for the longest tine, but really?… sorry, back to the review) gets an apartment that’s dirt cheap… because once he moves in, the front door turns out to lead to a dungeon! Luckily, he can go out the window to his modern-day life. Exploring the dungeon, he comes across a passed-out adventurer girl and takes her back to his apartment, where she discovers the wonders of modern lie and explains a bit to him about dungeon life. Like Dungeon Builder, this title has barely gotten started. It’s a lot heavier on the fanservice – there’s a long sequence regarding the girl wetting herself from fear and the consequences of this that I really did not need to read about – and Touru is slightly more generic than the already generic Procel. As with Dungeon Builder, it opens with a brief flashforward showing us other characters who have fallen into our lead’s orbit.

I’d argue that both titles deliver what the intended audience wants, and will irritate anyone who is not in that narrow audience bracket. I’d say Dungeon Builder, based on its first volume, has more promise than Dungeon Rest Stop. I may get a second volume of the former. Still, if you like fantasy dungeon series with cute girls, these two books exist for you.