don't toy with me miss nagatoro

By Nanashi. Released in Japan by Kodansha, serialization ongoing in the magazine Magazine Pocket. Released in North America by Vertical Comics. Translated by Kristi Fernandez.

One of the bonuses that come with buying a volume of the manga that you’ve already read in a magazine or online is the interstitial art that goes in between each chapter. Many manga, particularly comedies, tend to have these, usually little ‘tags’ that follow the chapter, meant to add something to the reader’s perspective or give them another good laugh. Sometimes it can be fairly pointless, but sometimes it’s actively welcome. Don’t Toy with Me, Miss Nagatoro is definitely a case of the latter. The interstitial art for the first few chapters shows a blushing Nagatoro, rushing away from the scene, wondering if she got her point across or took things too far. It makes it very clear that her previous actions were based on “girl who teases the guy she likes”. This is important, because, while it has righted itself by the end of the volume, the initial chapters of this series skew waaaaay too far towards the “bullying” end of the spectrum rather than “toying with”. 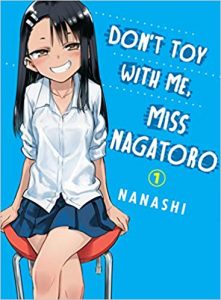 The protagonist is unnamed, as far as I can tell, and is generally called ‘senpai’ by the other lead, Nagotoro. He’s a bit of a schlub, and has a hobby of drawing manga. One day his underclassman, Nagatoro, discovers this and proceeds to grab his manga, read it aloud, and mock it mercilessly. As the volume goes on, she proceeds to take every opportunity possible to viciously attack him, and he is, understandably, feeling a little aggravated by this. Eventually, though, he discovers that she seems to only be like this with him, showing quite a different face to other guys that she’s around. What’s more, by the end of the book the reader, if not the senpai, realizes that she’s doing this because she’s got a crush on him. Of course, her methods may still involve bullying, but, well, that’s how she communicates, right?

There’s been a mini-genre in Japan of this sort of series, ranging from cute and innocent (Teasing Master Takagi-san) to unthinking and broad (Uzaki-chan Wants to Hang Out). Nagatoro takes a third tack. Nagatoro’s teasing verges on cruel, particularly at the start of the book, and if it had stayed that way I might have decided to drop it. It can be hard to get through. The tone softens as it goes along, if only a bit, though, and we start to see more of Nagatoro’s softer, more vulnerable side – and also see her get a bit flustered, particularly when she’s doing things like accidentally talking to her senpai via video chat. It’s important we come to like Nagatoro because unfortunately the senapi, as befits his lack of name, has far less character. He’s a bullied kid who cries a lot, and is quite good at art. If Izuku from My Hero Academia had given up on being a hero and gone to art school, he might be this guy.

So a bit of a mixed bag, but I like where the direction is going. We’ll see if it can keep it up.