By Yu Shimizu and Asagi Tosaka. Released in Japan as “Seiken Gakuin no Maken Tsukai” by MF Bunko J. Released in North America by Yen On. Translated by Roman Lampert.

Sometimes trends can be exhausting. Just try asking a hardcore light novel fan what they think of isekais sometimes and you’ll see what I mean. This is especially true when a trend happens so fast that you get five or six books in a row right at once. Magical academies – particularly ones that also teach swordsmanship and other “knight” classes – have been around for some time, as those of you who have mocked Asterisk War are well aware. And lately the trend has been to populate these schools with a demon lord who is reincarnated in these modern times. Not only is The Demon Sword Master at Excalibur Academy not the first of these, it’s not even the first one licensed by Yen On. Heck, it doesn’t even have a hot anime attached to it like The Misfit of Demon King Academy. What it does have is a very readable text that is written by a light novel veteran, one that doesn’t excite much but doesn’t put many feet wrong either. Read this, it’s competent. 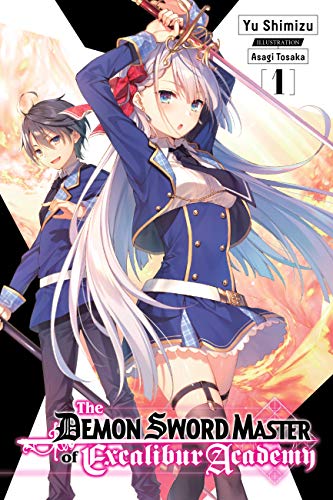 As with most novels of this type, our hero is the one in the background there, behind the cute girl. Leonis Death Magnus is an undead king whose lands are finally being taken down by the heroes. (He’s a former hero himself, so knows how tough they can be.) The Goddess of Rebellion, the one he was doing this all for, is gone. And so he seals his soul and waits for time to pass. Which it does. A thousand years later, he’s freed by two students investigating a ruin. There are a few problems, though. First of all, he’s got the body of a 10-year-old. Secondly, the girl who is trying to protect him, Riselia, is one of the few students at this academy who hasn’t woken to her abilities yet, and ends up getting killed as a result. So Leonis is forced to resurrect her as a vampire queen. Now he’s trying to figure out how much this world has changed, try to start a new life at this magical academy floating on the water, and help Riselia deal with her newfound state.

If you’re like me, nothing in that paragraph made you hyped up to read this. But it’s really not bad. The cast isn’t that large yet, and this book focuses squarely on its hero and heroine. The fight scenes are exciting and not confusing. There is some humor that is actually amusing, not always guaranteed in light novels. Of course, it’s not perfect. The hero really wants to tell us that the girls he meets have large breasts, so he does over and over. Riselia’s “it’s OK, he’s just a kid!” naivete beggars belief, though to be fair that’s the opinion of everyone else as well. The fact that Leonis is trying to figure out who the reincarnation of his lost love Roselia is when there’s a girl named Riselia who is his new minion makes him seem a lot more dumb than I think he’s meant to be. And I could do without the guy and his harem of mind controlled sword girls, even though he’s only there to get humiliated.

But yeah, this is another example of a book that exudes competence, which helps make up for deficiencies in originality and character. You will be mildly entertained when reading it. Which these days is more than we can ask for.