The second volume of the Erika Aurelia series sees her trying to prevent her death in Route Two of the otome game she played in her past life. That said, honestly, if you’re after otome game villainess novels you may find this wanting – Erika’s past life is important in determining her character as a whole, but rarely comes up in the text itself. Which simply leaves us with a fantastic action-adventure mystery series for young adults – and that’s fine by me. Erika ends up befriending her rivals, wandering into deathtraps, having to think her way out of deathtraps (and not always succeeding, though rest assured she is not killed off), and otherwise behaving just as I’d like a savvy eight-year-old with past-life memories to behave. Plus, in this book, there’s piles and piles of dragons. And if the villain seems a bit overly obvious, well, that’s what the extra chapters after the main story are for – this is not just Erika’s tale. 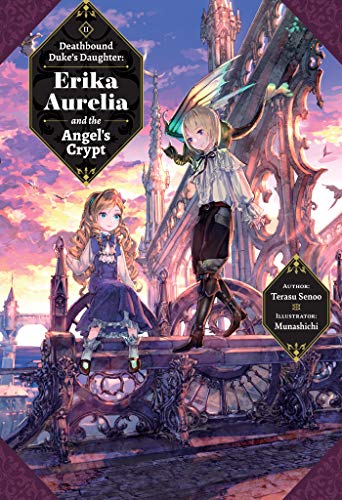 Erika and her father are headed to Ynys Negesydd, which is not in Wales, but is instead the capital of Ignitia, and they’re there for a royal banquet and also to watch a joust with dragons as the mounts. Erika is nervous as this is what sets up Death #2 on her list of things to avoid; her old self was rude to the first prince August, who is unable to ride dragons in a land where that is considered scandalous for royalty. Erika is unlikely to be as rude and obnoxious as her old villainous self, but she still has a tendency to speak her mind without thinking, so she could still be in trouble. Especially when August invites her to see the underground crypt rumored to hold the Beast of Contracts, and you start to realize that selling his soul to be able to ride dragons may be happening much faster than in Erika’s otome game.

There’s lots to like here. Erika is a great lead character, being very clever but also prone to making mistakes. Her past life, we are told, was filled with boys flocking around her and girls hating her, and honestly in this one, while she’s managed to avoid the latter, she still has the former. That said, the fact that everyone is pre-teen means the romance can be cute rather than annoying, especially given Erika right now has no feelings for anyone – and no sense of self-preservation, a fact noted by about half the cast. It’s also not a series that revolves entirely around her – her older brother has his own adventures, which seem to be just as if not more dangerous than her own, and there’s lots of bits of world building and lore that you know will pay off down the line but are just dropped casually here. Best of all, it’s simply thrilling to read.

Unfortunately, this may be all we get to read. While the webnovel this is based on has more material, Futabasha has not published a new volume in almost three years, so it seems to be cancelled. (This seems to be a problem with this publisher – see also The Epic Tale of the Reincarnated Prince Herscherik.) That said, if you’re looking for a fun YA novel with a great protagonist, you can’t really go wrong with Erika Aurelia.

We’ve had isekais for years now, and are used to “so what is the slight difference that makes this one worth reading”. Otome Game Villainesses, though, is still a relatively recent genre. That said, the fact that it seems to be exploding in popularity means that we can start to compare and contrast them that much faster. So, for those who would like a far more intelligent protagonist than Bakarina, or for those who want less emphasis on the romance aspect of these sorts of books, here’s a really nice choice for you. That said, Erika lacks Katarina’s empathy and emotional well of kindness, mostly because one was a happy-go-lucky high school girl who got hit by a truck while thinking about an otome game, and the other is a young OL who’s spent her entire life being slutshamed and the subject of rumors, and who finally was murdered by someone with a “grudge” against her for existing. It’s no surprised that Erika is a bit more jaded – even as an eight-year-old. 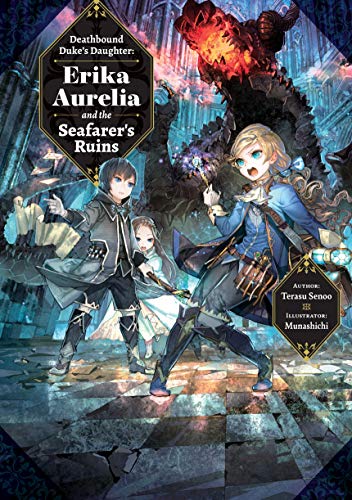 So you know the drill, she’s woken up as a villainess – a bratty young woman whose death kickstarts the plot of the game she was playing. That said, this is years earlier, and the event that makes her so loathed is one she knows – don’t let the younger sister of one of the “targets” die because of her neglect. She succeeds in making young Anne a fan of her right away, but Claus is dealing with inferiority complexes and preconceived biases, so is a tougher nut to crack. He’s interested in the ruins that her kingdom is known for – and so is the sister, which makes it more annoying when they both deliberately vanish one evening, leaving Erika to try to catch them so that Anne’s death doesn’t lead to her own demise. Unfortunately, Erika reckons without her super, super bad luck in general, and also her past life making her more than a little death-seeking, even if it’s only unconsciously.

As you can see, the bulk of this is not so much “otome game villainess tries to stop dying” as “kids go on a big underground adventure”, and it’s all the better for it. They’re mysterious moving labyrinths, deathtraps galore, golems, and a big bad with a big grudge. Erika and Claus work well together, and you can see why he ends up falling for her despite their young ages. Though Anne is the one who can tell that she’s not really looking for any romance, especially after her last life. As for Erika herself, despite seemingly being weak in terms of alchemy, she’s actually quite the savant, something noted by her older brother in a side story, where he worries that she’s going to take after their shady (and now dead) mother. (Amusingly, Erika was wondering if HE was the evil one earlier, but they both seems to be OK.) Most importantly, the book is simply fun, a short, quick read that will please most fantasy readers as well as “otome game villainess” fans.

Each book in the series has a Harry Potter-style title, so we’ll see what Erika Aurelia and the _______________” gets up to next time. In the meantime, this is an excellent addition to J-Novel Club’s Heart line.