All novels, to one degree or another, require a certain suspension of disbelief by the reader in order to make the book function. If you pick too hard at things, you’re never going to enjoy anything. Or, as MST3K put it, “it’s just a book, I should really just relax”. Sometimes, though, it can be hard. We’ve seen enough villainess titles by now to know how they usually go down, and it’s always interesting to see what variations our heroines make to avoid their tragic fate. Cecelia’s answer is to pretend to be an invalid for 11 years, then go to school disguised as a boy, without telling her parents, so that the “villainess” doesn’t even exist in the story. Which… why is that what she thought of? We hear once or twice that she was a theater geek in her old life, but this goes above and beyond. That said, she has very sturdy plot armor on, so it mostly works fine. 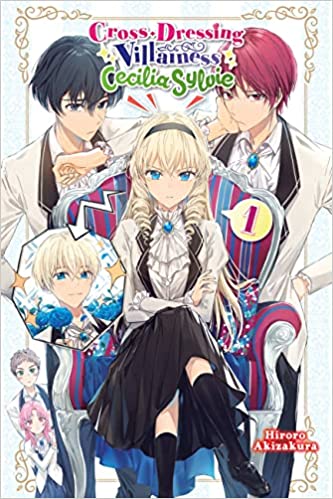 Our heroine loves to play the otome game Holy Maiden of Vleugel Academy 3. So much so that she and her BL-loving friend go to see a movie based on the game… and tragically die in a fire at the theater. Now she finds that she’s Cecilia Sylvie, a duke’s daughter and the villainess of the game who’s doomed to die on every route! (And yes, before you ask, her fiancee is the prince and she has an adopted brother who dotes on her. Bakarina fans will be right at home here.) Cut to 11 years later, and we see her solution: disguising herself as Cecil Admina, a young man attending the same academy. After all, bad things can’t happen to Cecilia if she isn’t there. That said, the plot is still going to happen, and the heroine of the game, Lean, is still around. Only… why does Lean not seem to care about the other romance targets? In fact, why is Lean more interested in the romance targets ending up with each other?

This is not *quite* a BL title – Cecil is definitely Cecilia in disguise – but there’s no denying it has BL elements. Her adopted brother Gilbert knows her secret and is in love with her, and that comes out regardless of how she’s dressed. Her fiancee Oscar is rather disturbed to find how attracted he is to this young man who he’s supposed to dislike, especially when Cecil does things like crawl into his bed at night on a camping trip because of fear. And then there’s the fact that Lean and her childhood friend Jade have started up a robust line of spicy novels featuring romance between two men who are a LOT like Cecil and Oscar. This is probably the biggest reason to get these books, because honestly as a villainess book it’s not great – Cecilia’s not particularly clever, as you can probably tell by her solution to her problems, and tends to get by with strength and guts.

If you really like this genre, then you’ll probably want to read more. For fans of Hana-Kimi.