combatants will be dispatched!

It can be hard reviewing these books because, much as I’m still finding them funny, there’s not as much to say about them that I haven’t said in my previous two reviews. The characters were reused and combined into the characters we love from KonoSuba – Snow is the most obvious, but in this book it really becomes apparent that if Wiz was a lot more pathetic she’d be Grimm from this series. The author is making a slight effort to try to give the characters depth – mostly with Grimm here, but a bit with Six as well. But it can be hard when you also have to fulfill a certain quota of over the top humor. Combatants is slave to its joke plot and characters, in a way that the author hasn’t quite figured out how to escape. They will in KonoSuba, but this isn’t that. So we’re left with the jokes. Which are excellent… provided you have sympathy for no one and don’t mind things getting quite crass. 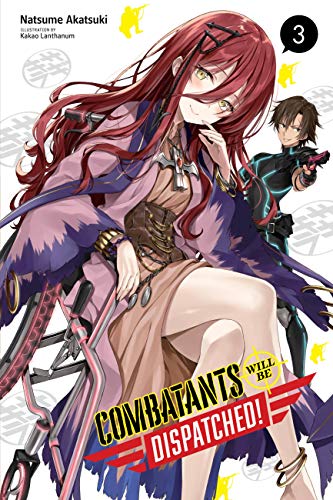 Our heroes… sorry, our villains are busy trying to build an enemy base from which they can fulfill their plans to take over this world. Sadly, the bases keep blowing up. Not only that, the very world itself seems out to get them, as they’re attacked by monsters, sandstorms, and can’t even burn down the forest without it coming back to take revenge. In amongst this chaos, the kingdom is having its annual Undead Festival, where the souls of those departed are… put into stuffed animals via Grimm, and wander around helping loved ones to move on. Trust me when I say this is played for laughs, not heartstrings. Unfortunately, some of the undead don’t seem to be peacefully mingling. And a former enemy, killed by Six, may be taking advantage of the Festival to stage a comeback. Can our heroes be horrible enough to win this time? Oh, no sweat.

Grimm is the heroine of this volume, though as with Alice before her, that doesn’t mean she gets all the focus. She does get an attempt at actual depth, though, as we see how dedicated she is to her archbishop job, and she truly does want to help the undead to move on (sadly, this usually also involves sending HERSELF to the next life as well). Six even notes if she were the nice helpful archbishop rather than the desperate man-hungry woman, she’d have a husband by now. As for Six, well, he’s terrible as always, but he manages to be topped by another agent here, Ten, whose own tendencies towards gross and petty evil are far worse than what Six has been doing, and lead to the biggest “oh my God” moment in the book, involving doing something in the Princess’ room. Snow is also entertaining, though as the series goes on she’s shifted from “mostly Darkness with a bit of Aqua” to “Mostly Aqua with a bit of Darkness”. And Rose deciding “Screw it, I’m gonna be a pet dog for this book” is fantastic.

So again, this book is not recommended to anyone who wants warm fuzzies. But if you like your humor along the Beavis and Butthead end of the spectrum, Six and friends are here to entertain you.

Given that this is a series by the creator of KonoSuba, featuring characters who bear great similarities to those in KonoSuba, has a sequence where our “heroes” use The Destroyer from KonoSuba, and finally features a literal crossover with KonoSuba at the end, where a different evil operative goes to that world and is horrified by the overpowered nature of Aqua, Megumin and Darkness, it would not be unreasonable for a potential reader to ask me if Combatants Will Be Dispatched! is as good as KonoSuba. And the answer is… no, of course it’s not. Even if you weren’t aware that this was an earlier work that was dusted off and published by Kadokawa after KonoSuba became ludicrously successful, the fact is that KonoSuba’s characters are all likeable and you root for them, despite their many, many deep personality flaws. Even Kazuma. Whereas Agent Six, Alice and the others are just as flawed, but are really unpleasant people at heart. Rose comes closest, but it’s bad when the author has to say in the afterword “they’ll get more heroic soon, I hope.” 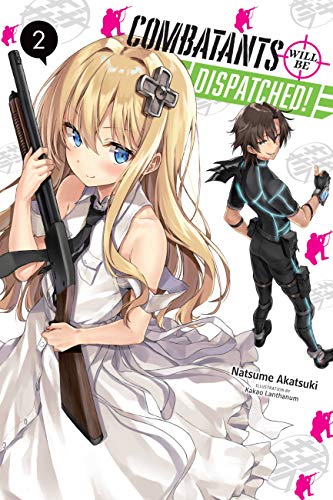 Alice is on the cover, and Akimoto states she’s the “featured girl” of the book, but honestly she doesn’t get much to do beyond what she did in Book One – snark at Six. Even her saving the day at the end of the book is only mentioned secondhand, because Six was knocked unconscious for all of it. To be fair, she is VERY good at snarking at Six – she’s still my favorite part of the book. With the Kingdom desperately short of water, the King missing, and the princess unwilling to say Six’s stupid password to a large crowd, he and his group are charged with negotiating water from a neighboring kingdom. Well, actually, he and the group are bodyguards for Snow, who is supposed to seduce the horny and easily led ruler of that kingdom. Unfortunately, due to a ridiculous chain of events, they end up starting a war. And also reviving an ancient superweapon. Fortunately, Six can still do what he does best – be petty and horrible till he wins the day.

I mentioned on Twitter that this feels like a KonoSuba with all the brakes removed, and I still stand by that. Snow is still a horrible combination of Darkness and Aqua with the flaws of both characters, and I longed for her to get run over by a bus. Rose comes off best of the crew, as I said before, but is driven by her appetite, which unfortunately leads to a lot of cannibalism jokes… not to mention sex = food jokes… when they have to cross a desert for several days with no food. Grimm is less fun here, with her one personality trait seeming to be “desperate”. There is a long-running argument over the course of the book between her and Alice over the nature of magic, which Alice, as an artificial human, rejects entirely. This could lead somewhere good, but it will have to be in future books, as nothing comes of it here.

Fortunately, this book does have one big thing still going for it: it’s funny. I laughed quite a bit. But with KonoSuba I laugh and also care, and I haven’t gotten to that point with this cast. They need a third dimension. Hopefully in future books.

Sometimes you can have an isekai without all of that pesky dying and being reincarnated, or being transported to another world by a magic spell. It’s as easy as making the “fantasy world” on another planet, and having our heroes sent to it to see if it can be taken over… erm, colonized. That’s the basic premise of this series, which features the nameless Combat Agent Six and his android partner Alice Kisaragi sent via a teleport (that is totally tested and functional, honest) to a planet that is apparently dealing with a demon lord invasion. On the one side we have the kingdom of Grace, with knights, princesses, castles, etc. and the demon lords, who have golems and are your standard demonic types. On the other side we have Six, Alice, and their newly befriended band of misfits… erm, crack squad, and modern weaponry. Oh, yes, and one other thing that should be noted: Six and Alice work for an evil organization, and can only get weapons and equipment by doing evil acts. 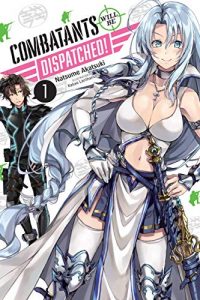 Actually, one other thing should be noted: this is by the author of KonoSuba. Actually, it was written online before Konosuba, and picked up by Kadokawa after the latter’s success as a light novel/manga/anime franchise. This means, needless to say, that the best reason to get this is the comedy. It’s not a full-on parody like KonoSuba, but the humor tends to be along the same lines. (Actually, the humor can sometimes, like KonoSuba, cross a line or two – I was not all that pleased with the “take photos of the evil sorceress in a certain pose” moment, even if it’s a PG-rated version of same.) The cast may also ring a bell as well – Six is not that far from Kazuma, and Snow is basically what would happen if Aqua and Darkness had a kid. There’s a lot of great humor, provided you don’t mind the cast all being horrible people to one degree or another.

The best reason to get the book is the bantering relationship between Six and Alice. Like Kazuma and Aqua, there’s no real romantic tension between these two. Instead, they function as snark factories, ready and willing to tear down anything for the sake of evil and/or their own amusement. The other good reason to get this is the few moments when the protagonists are allowed to be cool. Because it’s not a parody like KonoSuba, the cool moments are allowed to exist without getting undercut, and actually impressed me a bit, even when they were also hilarious (Rose and Grimm’s “you shall not pass!” moment, the land mine trap, the chainsaw ending). There’s also some nice character development for Snow, who is arrogant and sword-obsessed but also has something of a righteousness to her, which contrasts well with Six, who is supposedly working for an evil organization but relies on petty, assholish acts to cover up the fact that he can’t be REALLY evil when it counts.

The color pages note that Snow is “this volume’s heroine”, so I expect the next book will focus on either Rose, a chimera girl who’s trying to follow in her grandfather’s footsteps, or Grimm, an archbishop of death who actually uses a wheelchair most of the book – something rarely seen in a light novel. (Yes, she can on occasion get out of it, but for the most part really does need it.) A must-read for KonoSuba fans, and those who enjoy comedy light novels and don’t mind characters whose default is “jerK” will also be happy.