By Yuriko Hara. Released in Japan as “Mayu, Matou” by Enterbrain, serialization ongoing in the magazine Comic Beam. Released in North America by Yen Press. Translated by Amanda Haley. 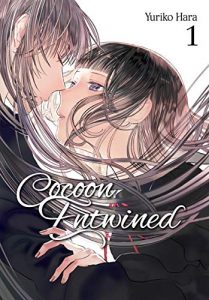 I suppose I should go into a LITTLE more detail, but honestly, after reading the first volume of this new series, “hair” is going to be what everyone takes away from it. It is hair-drenched and hair-permeated, a story about a private Japanese Girls’ Academy whose very uniforms are created using the hair of their seniors, but even there you get the sense that the story is somewhat irrelevant, an excuse to simply draw hair in every possible way. Even the cover art gets into it – the front cover may look relatively sedate, but turn the book over and you can see the hair of the two leads tangling into each other, trying to be the best metaphor that hair can be. Which is good, as hair gets to be a metaphor for a lot here. In addition to hair, the story focuses on three students at the school, two of whom are what you’d expect, and one of whom seems to have wandered in from some other manga.

Saeki is the girl who crosses over into both storylines, the “prince” of the school because the school needs one, rather than due to any desire of her own, though she plays the part even as it exhausts her. She gets closer to Yokozawa, who is our “normal girl” viewpoint character, though Yokozawa’s tongue is a lot more acid than this sort of character usually is. They like each other. The third cast member is Hoshimiya, the granddaughter of the headmistress, who spends her days locked in her room and seems to have a far more casual attitude towards hair than the rest of the school (seriously, you can be expelled for your hair being too short). Hoshimiya seems to be ethereal to the point of ridiculousness, and even when she and Saeki escape the school and go all the way to the local docks, there’s no real escape.

This is, of course, meant to be a yuri manga. Yokozawa clearly likes Saeki, and the book ends with a kiss, albeit the usual “they’re sleeping but I can’t resist” sort. Saeki and Hoshimiya also clearly have doomed chemistry in that Sei-and-Shiori sort of way. That said, you could also argue that the story is horror. Aside from a few exceptions like Saeki, most of the cast is the traditional long black haired heroine, which fits the private school setting but is also a trope in Japanese horror stories. The gimmick of the student’s shorn hair being used to make the uniforms of the incoming students is milked for all its worth, with the uniforms seeming alive and described as breathing, and it is meant to be dream-like and erotic but also a bit creepy. Hoshimiya herself also makes me think of horror, and it’s worth noting that we never clearly see her face. Don’t be surprised if she ends up being a ghost or a Zashiki-warashi of some sort.