can someone please explain what's going on?!

Sometimes you go into a book with expectations. Perhaps the book is part of a new line of romance novels for young women the publisher is putting out. Perhaps the title features the words ‘wedding story’. Perhaps the cover, which shows the heroine in a wedding gown and a handsome young man, draws you in. Perhaps you read the manga version, which is available on the Renta ebooks site, and every single chapter was filled with a breathless romantic description of what was happening. Indeed, the book does indeed hit all these points. There is indeed a wedding. There are balls where the heroine shines. There is another woman, constantly trying to call out the heroine so that she can prove who’s top dog. There’s even the tried and true “hero asks for marriage of convenience and then gradually falls in love anyway” plotline. The startling thing about this book, though, is that its heroine, Viola, starts the book completely uninterested in romance and Cercis, the hero… and ends it the same way. 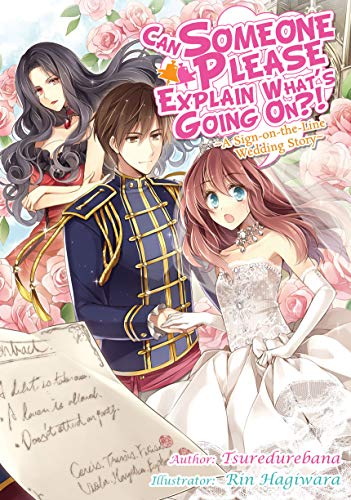 Viola is the daughter of an Earl whose landholdings have fallen on hard times, and is used to doing most things herself with a minimum of fuss and servants. She is rather startled when Duke Cercis arrives at her door with a proposal. Well, more of a contract. He has a woman he already loves, but she’s a dancing girl and therefore he can’t marry her and his family won’t approve. So Viola is to be his “show wife”. Viola, after securing enough funding to save her family’s debt, agrees very matter-of-factly, and a year later they are married and she’s living in a fabulous mansion. Wondering what to do with herself at first, she’s soon winning over the servants (and indeed dressing as one), cutting back on the extravagant meals, brightening up the gardens and house, and putting her own stamp on everything while the Duke and his lover live in the cottage elsewhere on the estate. All well and good… but why is the Duke coming over more and more often?

Viola’s narrative voice is all over this book, and it’s a fun one. She has a fair amount of snarkiness to her, but there’s also a heaping helping of unawareness, and those two don’t usually go together. She’s the sort to describe herself as scrawny, plain and flat-chested, and has absolutely no idea why her maids, when given the opportunity to put her in real fashion and jewelry, go absolutely ga-ga. The answer, of course, is that Viola’s scrawny and flat-chested is everyone else’s tall and willowy, and she looks fantastic dressed up. She doesn’t put on airs, she actually cares about the people around her, and she shows absolutely no interest in getting involved with the Duke and his mistress. Indeed, I was sort of hoping for more Duke and mistress – there’s a running gag where the mistress keeps showing up looking for the lady of the manor and runs into Viola (dressed in her normal black “maid dress” and therefore unrecognizable), but for the most part the book is content to gradually work its way up to the inevitable breakup that comes when the Duke realizes he does love Viola after all.

This leads to the climax, where the duke confesses his love, and Viola says she doesn’t really think of him that way. Given that the series is nine volumes long to date, one would assume he will eventually get his point across, but if he’s going to be wooing her, he’d better try a bit harder – rewriting their contract (which had said she, as a “show wife”, could also have lovers) to say she can only love him is not a terrific start. Still, the combination of the oddly shaped not-romance and the intelligent (if somewhat too self-deprecating) heroine makes me want to read further.