campfire cooking in another world

I’m very fond of what has become known as “slow life” light novels. The basic premise of them is that our hero/heroine ends up in another world and decides not to go adventuring or defeat the demon lord but to live quietly and enjoy themselves day to day. Now, of course, the narrative usually pushes against this, and a lot of slow life books have quite a bit going on. I’ve Been Killing Slimes for 300 Years and every single book by FUNA are good examples of the type. That said, an author has to be very careful when writing this sort of series, as there’s a difference between ‘relaxing” and “boring”, and the line can get crossed very easily. Killing Slimes’ heroine verges at times on the dull, but for the most part manages to muddle through and keep our interest. Unfortunately, the same cannot be said of Mukouda, the salaryman who ends up in another world with the skill “Online Supermarket”. 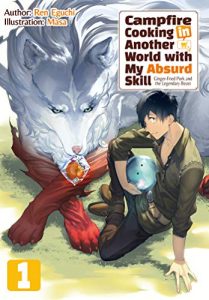 Mukouda is summoned to a fantasy world along with three other heroes. He, however, is not a hero – he’s a victim. He was accidentally summoned, and has a skill that is, well, not very useful, as well as stats that are merely slightly above average. The heroes look down on him, the kingdom looks ready to abandon him, and the entire “save us” business is shady to begin with. So he sets off with a little borrowed money and tries to make his way elsewhere. That said, his “online supermarket” allows him to use ingredients from Japan in his cooking… and for those who’ve read standard fantasy isekai, that’s a big deal. Sure pure salt! Amazingly soft bread! He also attracts the attention of others, including a legendary Fenrir who becomes his familiar in exchange for constantly feeding him, a baby slime whose growth rapidly outstrips Mukouda’s own, and Aqua from KonoSuba… erm, sorry, Ninrir the Wind Goddess, who will grant blessings for sweets, and is absolutely not Aqua from KonoSuba, despite, well, looking and acting exactly like her.

Honestly, if it were not for the hero, this would be more interesting than it is. Fenrir is a lot of fun. The baby slime is really cute, and the goddess is pretty funny. There’s hints of plots that could go somewhere here, and a whole menagerie of fantasy monsters that manage to be both threatening and tasty. I suspect in future books more options are found with the supermarket skill that can lead to cool things. The trouble is, though, that Mukouda isn’t fun. He wants to level up the easy way, and when thrown into situations where he’s force4d to fight for his life is a total coward about it. Which is, well, very realistic, but I’m not hear to read about you or me, I want to read about a light novel protagonist. Mukouda isn’t a ditz, or a snarker, or hot-tempered. He does not murder entire nations because they’ve pissed him off, like other bland protagonists I could mention. He’s just a guy who cooks.

If you enjoy isekai cooking novels, you can give this a try. I think this one volume will be it for me, though.