by the grace of the gods

By Roy and Ririnra. Released in Japan as “Kami-tachi ni Hirowareta Otoko” by HJ Novels. Released in North America by J-Novel Club. Translated by Mana Z.

We’re starting to get the second generation of isekai writers here, those who did not start their webnovel after watching El Hazard and playing a lot of RPG games, but rather those who started their webnovel after reading a giant pile of isekai webnovels. By the Grace of the Gods and its author, Roy is definitely a book written by an isekai reader, and the lead character is also a fan of the novels, so dying and meeting gods does not surprise him. In fact, little surprises him. He is reincarnated in another world, a fantasy world, as a young eight-year-old boy. Of course, he also brings along a large amount of magic power. And a large number of ridiculous skills. And this is in addition to his old life in Japan, where, despite being a salaryman, he was a martial arts expert who worked out daily and also has swordsmanship drilled into him by his father. If anything in those last few sentences irritates you, I advise you to stay away. If, on the other hand, it’s fine, you should enjoy this book, as Ryoma ends up in his fantasy world and immediately… hides away from civilization for three years. 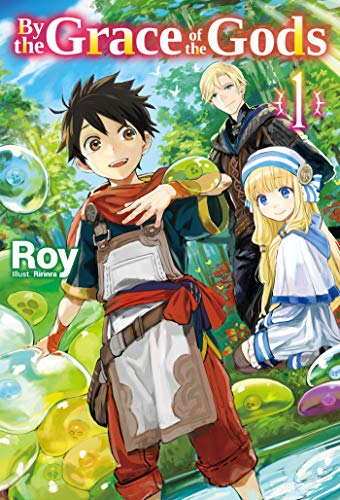 Ryoma is the anti-Tanya. The gods love him… in fact, he has blessings from FOUR gods, and makes sure to pray to them. His three years spent living in a cave away from people have allowed him to research slimes, which takes up most of his time, though he still finds time to kill bandits and learn more powerful magic. Fortunately, there’s a timeskip towards the start of the book, and an eleven-year-old Ryoma meets a duke and his party who are in need of some medical aid, which Ryoma is able to provide (he can make medicine too). The duke is nice, and has a family who are also nice, including a girl Ryoma’s own age who is bright and shiny and innocent and the opposite of the soft-spoken, stoic Ryoma. Invited to leave his cave and go with them, Ryoma finally interacts with a fantasy city… which is good, as his trained slimes are desperately needed to stave off an epidemic.

As you may have gathered, this book is ridiculous, but one thing I haven’t mentioned yet is that it is also a “slow life” book. Things happen at a leisurely pace, there are no action sequences, and there’s no romance as Ryoma and Eliaria are eleven years old (despite Ryoma’s old memories). It just wants to hang around Ryoma and watch him be cool, but he’s cool in a very nerdy scientist sort of way. He has his specialized slimes, and they get to show their stuff. They can clean the hardest grime. They can kill off bandits when ingested. And, in the thrilling climax to the book, they can eat sewage from a filthy cesspit… which also shows there is a potential deadly bacteria there as well. The best part of the book is the relationship Ryoma develops with his found family, who treat him like an orphan with a tragic backstory and love him to death.

Again, this is second generation isekai. It assumes that you’re okay with OP heroes, and that excitement and adventure are about 4th on your list after friendly chats about slimes (which are the first three slots). For those readers, this is a solid choice. I enjoyed it.