buck naked in another world

When Seven Seas first tweeted about this license, I may have made a comment or two about it. Something about the title, the concept, and the cover art just set me off. It looked to be the culmination of every single bad light novel trend out there. Unfortunately, people responded to my blithe snarky comments with “ha ha, can’t wait to read your review!”. I realized only too late that this meant I actually had to review the thing. Oh well. How bad could it be? Things weren’t helped by the fact that, when it arrived on my phone, I found it was far longer than a book called “Buck Naked in Another World” had any right to be. This is a chunky volume. But, I finished it. And here I am, reviewing it. And I will tell you right up front: do not read this bad book. Tempting as it is to end the review there, let’s move on to a summary of the plot. 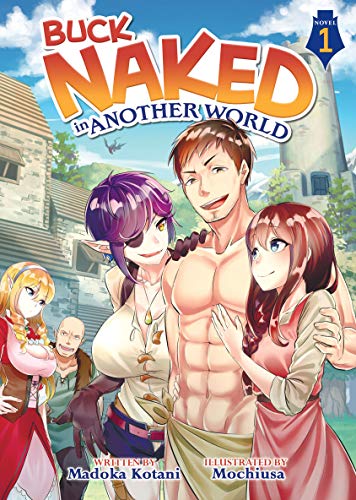 …no, wait, first I want to talk about that cover. I have to hand it to the artist: I don’t think I’ve ever seen a light novel hero I want to punch in the face on sight more than this guy. Look at that smug cocky grin. And we have the adoring mild-mannered girl on his left, and a big-breasted, eyepatch-wearing warrior on his right. More to the point, as you can tell, he’s not QUITE naked. Shuta (who everyone calls Shooter in this world) is a 30-something guy who floats from menial job to menial job, till one day he winds up in another world, naked. He’s at first arrested and put to even more menial jobs… naked except for a small loincloth, which you see on the cover. Gradually he wins over the population of the village he ended up in, gaining a wife and defeating monstrous wyverns. Then he goes to the big city, where due to his lack of identification he ends up tricked into slavery, and slaves are… you guessed it… naked.

Before I get into the naked thing, let’s talk about everything else wrong with this book. It almost reads like a checklist of things I dislike in light novels. It’s clearly based on a webnovel, and thus very long and not at all edited down. (In fact, judging by the ‘Shinyaku’ in the title, this isn’t even the first attempt at publishing it!) Slavery is here, because it’s a fantasy light novel, and it’s still irritating. There’s a scene where a woman pees herself in fear and Shooter will not shut up about it, something that remains very popular in these sorts of light novels as well for reasons I’d rather not think about. Shooter gains the affection of at least 6 different women over the course of the story, one of whom he marries, and does not do much except kill monsters and be nice to them to earn this affection. Moreover… OK, let’s get to the naked bit.

First of all, it is not clear until a side story at the very end why no one just gives this guy a pair of goddamn pants. I had gone into the book assuming it was some curse or such, but no. The village thinks that because he arrived naked, and does not immediately shriek for clothes, that this is just his thing. His wife (clearly embarrassed by his nudity, something Shooter interprets as fear) makes him g-string underwear, but says pants are above her station. When he’s enslaved, slaves are said to be naked, but again, he’s really the only slave we meet for more than two lines of text, so it’s still just him. Look, I get that you need to make your book stand out among all the other fantasy isekais. But… OK, let’s take Reborn As a Vending Machine. Ridiculous isekai premise, right? Harem of girls, right? Overpowered guy, right? However, if you took out ‘he’s a vending machine’, nothing in the story would work. But if you gave this guy clothes… nothing in this story would change at all, except we’d be spared a few wiener jokes from the narrator. There’s no goddamn reason for him to be naked except for clicks on your webnovel. At least rise above that low bar!

The translator and adapter do their best here… for good and ill, Shooter’s narration sounds like the sort of guy you’d imagine from the cover. In other words, you want to strangle him. Sadly, his smugness doesn’t help the mind-numbing worldbuilding that we get sprinkled throughout this, which is the main reason this is so long but is not worth it. And oh yes, for those who are buying the book featuring that a book with a title and girls like this has to have sex? Nope. Not at all. This book if irritating, dull, occasionally offensive, and far too long. Do not read it.