A couple of quick notes before we get to the meet of this second of three novels concerning Sayaka before, during and after Bloom Into You. First of all, the book assumes you are familiar with events in the 7th manga volume, which just came out over here, and also assumes you know how the manga is going to end, at least vaguely. Secondly, this is written by the author of Adachi and Shimamura, and that’s a big surprise to me, as the two books could not have felt more different. Adachi and Shimamura deliberately meandered and stayed in one emotional beat for most of its first volume, despite the multiple narrators. Whereas this book, entirely narrated by Sayaka, absolutely knows where its endpoint is, and barrels along getting there, even as most of it involves an extended flashback showing Touko and Sayaka’s first year. If nothing else, this shows you that just because a book is a tie-in does not mean it’s just dashed off. 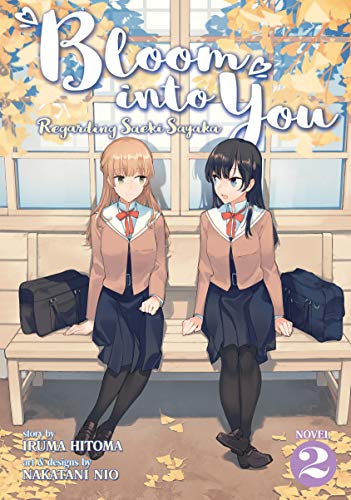 The book begins around the time of the manga, with Sayaka first meeting Yuu and noticing her relationship with Touko. The two have nice, frank discussions in ways that neither one of them could ever have with Touko (I’ll be honest I can’t remember which of these scenes, or maybe all, are from the manga as it’s been a while since those volumes), and then takes us up to Sayaka’s confession from the 7th manga volume. We then have an extended flashback, the bulk of he book, showing us Touko and Sayaka growing slowly closer over the course of the year, despite the walls both of them naturally keep up, and also showing Sayaka becoming aware of Touko’s circumstances… and not really doing much with that information. It’s a great look at why Yuu, rather than Sayaka, is the winner here. We then end with Sayaka in college, in what amounts to a trailer for the 3rd volume, meeting who I assume is her future partner.

Again, the best reason to read these novels is Sayaka’s POV. I may have criticized the author for her narratives in her own work, but handling someone else’s character she’s fantastic, and supported well here by the translators and adapters. Sayaka sounds exactly like we’d expect, both in dialogue and in her head, and I loved the constant use of Touko’s full name in her thoughts until they get to be friends – and note this is after Sayaka says that she’s in love with her! Sayaka’s experiences in the first book help her here, but that doesn’t mean that she doesn’t run into her problems, and her own decisions regarding the “safe” relationship with her best friend lead to it never getting past that. And there’s also Sayaka’s own natural reserve, which gets a little better here but is still there… while watching Touko crawl around her bedroom trying to chase one of Sayaka’s cats (thank god that got an illustration), Touko notes for the first time Sayaka’s face looks “relaxed”.

So yes, Sayaka matures here but is still very much a high school student when it comes to her emotional strength. I greatly look forward to the third book, which shows us Sayaka in college, and hopefully seeing how she builds on her love. I also look forward to rereading this one day after doing a reread of the manga, to better pick up the nuances at the start of it. All Bloom Into You fans, and yuri fans, should love this.

Bloom Into You is one of the bigger runaway yuri hits of the past few years, so the fact that it’s getting a series of light novel side-stories, particularly given it’s by the prolific Hitomi Iruma, author of Adachi and Shimamura (also coming soon from Seven Seas) should not really surprise me. But I admit I am surprised. Every time there’s a shift in the marketplace I always seem to be blown away. All the old chestnuts: “yuri won’t sell”, “light novels won’t sell”, “tie-in novels never get licensed” – all these are long since dead. Seriously, appreciate the market we live in now. You should especially appreciate it because it gives us this, the first in a projected three-volume series of novels about Sayaka, Touko’s best friend and winner of the “I absolutely want to read more about her” poll that I’m sure was taken internally at ASCII Mediaworks. This book serves as a prequel to the manga, showing us Sayaka’s early life – and, more importantly, her inner monologue. 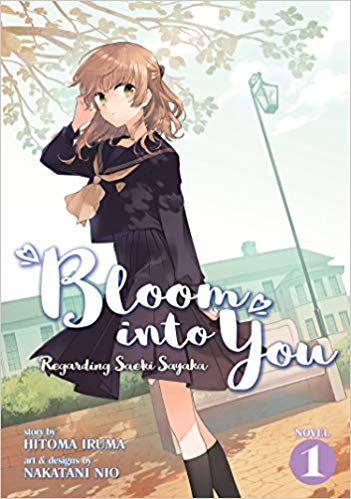 The book is divided into two sections. The first introduces us to Sayaka at 11 years old, busily taking part in endless activities and trying to give off the impression of being a mature, serious person – even to herself. Her swimming lessons are part of this, but are broken up every time by an unnamed girl (I called her Uruka after a while, after the BokuBen girl with similar looks and personality) who wants to be Sayaka’s friend and find out more about her… and also about the heat that she feels within her body whenever she’s around Sayaka. This story was bittersweet and painful, ending with Sayaka literally fleeing the scene but also learning more about herself. The second, longer story takes place when Sayaka is 14 or so, and is about her relationship – touched in the manga – with her sempai (who does have a name, but Sayaka chooses to stick with sempai even when they are dating.) Sayaka does not initiate this affair, but certainly is the most deeply affected by it, something she slowly goes to realize as time passes.

The best reason to get this is Sayaka, who is captured perfectly here, showing off a serious, mature for her age girl who nevertheless still has a great deal of growing up and discovery to do about herself. We see this captured in the stories, as the reader is usually well ahead of her in terms of what’s actually happening in the other character’s heads – Sayaka has trouble figuring out what the other girl is thinking, but we do not. Frequently this an be, as I noted, very painful – seeing swimming girl’s nascent excitement and frustration around Sayaka is very identifiable, and I was upset as it became clear that, as this book is from Sayaka’s POV, we’d never find out what happened to her after the story. As for Yuzuki, Sayaka’s senpai, it’s clear to the reader almost immediate that she’s in love with the idea of a love affair more than anything about Sayaka herself. Still, she’s not a pure villain in this book, and her awkward “oh crap what have I done” moments are also squirm-inducing.

The book closes with Sayaka determined to move on and never fall in love again, a determination that doesn’t even last five minutes into high school as she meets Touko and is shot through the heart. The second book promises to show us Sayaka’s POV of events during the manga proper. Till then, this is essential for Bloom Into You fans, as well as anyone who likes well-told coming of age stories.