banner of the stars

These are novels rather than light novels, so you don’t get cute interstitial artwork. This may be why we get this cover, with Lafier trying to look cool and captainlike while a cat is climbing on top of her. The cat is Jint’s (it’s Jint now. Don’t ask. Or rather, ask Hayakawa Publishing.), and spends much of the book wandering around places where it shouldn’t be and basically being a cat. That said, after the massive firefight that dominates the second half of the book, it’s probably for the best that the cat ends up being given a permanent home on planet. The cat also provides a different source of humor from the usual in this book, which is banter. Everyone in Banter… erm, Banner of the Stars is in a two-person team of back and forth dialogue as if they’re Nick and Nora Charles – indeed, Jint and Lafier are not nearly as caustic about it as many of the others, perhaps showing the feelings they have for each other. It’s almost Moonlighting in space. 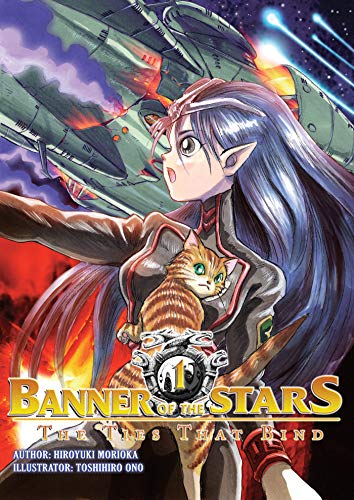 This book takes place three years after the events of Crest of the Stars, with Jint now reunited with Lafier as her Clerk and right-hand man on her brand new ship. She’s just one of many ships that are setting out to fight the enemy, though, and we get a large amount of time devoted to space combat, things blowing up, and last-minute escapes. We meet Lafier’s crew, with Number Two Sobash, stoic Ecryua (stoic may be the wrong term given her love on Jint’s cat) and lovable drunk Samson. There’s also her Assault Unit Commander, who happens to be the sister of the guy that Lafier killed in Crest of the Stars. Sporr is still hanging around and being fabulous. And we also see Neleth and Nefeh, two twin brothers (unusual among the Abh) with a propensity towards being exceptionally weird. Everyone talks back and forth at each other like it’s His Girl Friday. Oh yes, and there’s the planet they’re fighting to conquer, which irritatingly hasn’t surrendered yet.

As I said, Jint and Lafier are also part of this, and we do get some choice banter (the thing about Lafier thinking her mother was a cat is brought up by Jint multiple times, to her displeasure). At the same time, there is a certain fatalistic quality to Jint that the reader, and Lafier, may find disturbing. Atosryua invites Lafier and Jint to a dinner to commemorate the life of her brother… the one Lafier killed… but it’s all very polite and no hard feelings. Afterwards, Jint remarks how he doesn’t have anyone who would miss him after he died anyway, and the look that Lafier gives him burns through the page and onto your fingers. She makes it more explicit later that she would miss him, dammit, but it’s fairly clear that if there is any romance going on between the two, she will need to break through a bit of his self-debasement first.

The author notes that each book in this series will be self-contained, which is probably a good thing given the first came out in 1996 and the 6th in 2018. As with Crest of the Stars, it will bury you in vocabulary, and some of the eccentricities of the characters feel like the author is being cute rather than letting it develop naturally. Still, this is a good solid start to the “second season” of Jint and Lafier.