By Natsu Hyuuga and Touko Shino. Released in Japan as “Kusuriya no Hitorigoto” by Hero Bunko. Released in North America by J-Novel Club. Translated by Kevin Steinbach.

I’ve been waiting for this one for a long time (this first novel came out in Japan in 2014), and it would have taken a major misstep for me not to be delighted by it. Spoiler: there was no major misstep. Now admittedly, I can see that it’s not a book for everyone. If your ideal of a fun light novel is along the lines of Sword Art Online or Haruhi Suzumiya, this is not going to be for you. I almost added A certain Magical Index to the list, but I’ll be honest: if you read Index for the political infighting (there must be some who do), this is your sort of book. It will also appeal to fans of Ascendance of a Bookworm, Accomplishments of the Duke’s Daughter and other series heavy on worldbuilding. But most importantly, this will appeal to fans of the classic mystery. Maomao is a reluctant forensic detective, but that is what she is called on to be here, and she excels. 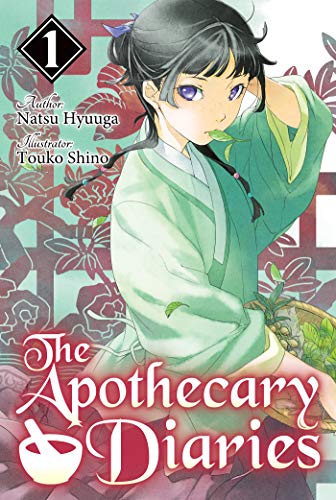 The story opens in the Emperor’s vast royal palace, with our heroine, Maomao, already working there. She was kidnapped while in the woods one day and sold to the palace by “merchants”. For the most part, she does laundry and tries to keep a low profile… till she notices that two of the Emperor’s consorts, and their children, have taken ill with what Maomao (and the reader) can clearly see is mercury poisoning. She tries to subtly convey this, but is discovered by Jinshi, a eunuch who works for the Emperor, and is promoted to be poison tester for the consort whose life she saved. As the book goes on, Maomao finds herself getting involved with more poisonings, assassination attempts, and even standard bullying. The reader, meanwhile, discovers that Maomao is far from the stock shoujo light novel heroine… and even the stoic ones aren’t quite as odd as she is.

As you might guess, Maomao is the number one reason to read this. Her matter-of-fact dialogue and banter with Jinshi is beautiful (the translation shines throughout), and you can see exactly why Jinshi grows so attached to her so fast – she sees through his pretty face for the manipulator he really is, and looks at him “like a worm” – something that I’d say would turn him on if he weren’t a eunuch. (That said, I will not be too surprised if he has a secret to hide about that.) Maomao’s detective work is excellent, both when she’s in her wheelhouse of poisons and also when she’s having to guess motive and opportunity. And, well, she’s weird – curiosity always wins out for her, even when it comes to potentially lethal drugs or foods. I also liked the consorts and the wars between them, from the far too young girl who is passively bullied by her attendants, to the older one with a past to hide, to the sexy one who is on the outs with the Emperor till Maomao gives a very obvious – and hilarious – implied suggestion – as well as Maomao’s own savvy mistress.

The book ends in such a way that it could have been a one-shot, but there are nine volumes to date in Japan, and it has a manga that is being published here by Square Enix. Very much driven by the mysteries and its heroine, I found I was unable to put this book down. Bring on the second volume.