Sometimes when reading manga you are looking for a well-characterized, touching work that will heal your heart and make you think. And sometimes you’re looking for silly sex jokes. If it’s the latter you’re after, I am pleased to say that Ao-chan Can’t Study! is here for you. It’s about as subtle as a brick to the head, but why would you want to be subtle in a case like this? It’s a sex comedy. With the emphasis on the comedy, I hasten to add – there’s tons of sex talk, but don’t expect any forward progress, at least not at the start of the series. It sort of feels like Seitokai Yakuindomo to a degree (and I could write an entire POST about why Kodansha Comics never licensed that, complete with them indirectly dissing it when they picked up Aho-Girl). Despite all that, though, things still remain on the innocent side here, adn the kids read like normal romance comedy heroes and heroines and not perverts. Well, mostly. 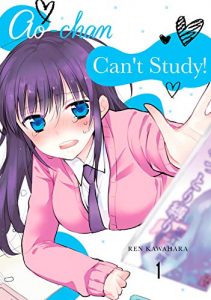 Shonen Magazine Edge tends to push boundaries a bit, and despite being clean at heart, so does this title. There’s Lots of discussion of penis size and how it can actually hurt for a woman when a guy’s too big. In the second volume, when the class goes to summer camp, Ao somehow gets it into her head that she’s going to be invited to a “fuck party”. As I said, things you wouldn’t normally see in Fairy Tail (UQ Holder, maybe), and you can see why it’s a digital-only series. The reason it avoids being pure skeeze is Ao, who is pretty innocent – she has no idea what a dick really looks like, and most everything that she gets in her head is either exaggerated or wrong. Plus she’s falling for Takumi too, and has no idea how to deal with her feelings – and her libido. Add in a rival or two, and you’ve got a fun if ecchi comedy, recommended for those who don’t mind that sort of thing.