The third day, as I indicated, was very light for me: I had no panels to attend. I ended up going to the winners of the AMV Music Videos showing, something I haven’t done in a number of years. I was impressed at the technical excellence – the days of using 5 different VHS sources is long gone. I especially liked the video that brought every single “beach episode” anime series together, and then started mixing the characters next to each other. Other highlights included a Totoro trailer with the sound from Stephen King’s IT (this was by the same women who did the beach one) and an action filled My Hero Academia video that showed off everything we love about the series, with good (if very loud) music accompaniment.

And for those who like sad videos, there was a Your Lie in April one which brought the tears. I was less happy with the “honest trailer” for Yuri On Ice, which read very much as a “ew, gay guys” sort of thing, even if its intention may have been partly to parody that. The winner on all counts was a Gurren Lagann video. I was rather surprised at seeing some more obscure anime – who still remembers MM!, which won a romance category to the tune of Soft Cell’s Tainted Love? But mostly I was impressed at the technical expertise all the finalists had. Well done.

I then went up to look over the Artist’s Alley, whcih I tend to save for last when I go to cons. I picked up two cute pins of Izuku and Ochako as stuffed toys (yes, the pin was art of them as the toy… it was cute, and is also my ship). As you can imagine, there was a lot of the most popular titles such as My Hero Academia and Fate/Grand Order, but I was also pleased to see a good showing for Cells at Work! and Golden Kamuy. The most popular older Jump titles such as One Piece and Naruto were there, though I saw little to no Bleach – its its time over? Speaking of fads, there was also far less Pop Team Epic than I’d anticipated, adn I wonder if that may also turn out to be “of its time” fairly rapidly. As with the AMVs, it’s impressive to see how far the Artist’s Alley has come since the days of yore, with almost as many pins, buttons, plushies (a lot of cute plushies, which also tempted me) and merch to go along with all the artwork. It’s showing off all aspects of an artist’s work, and was well worth your time.

And that was it for me. Anime NYC was a very successful convention this year, in my opinion – after the initial line holdup at the start, there were no issues with major lines or any bag check nightmares that I heard of, and only one panel had an instance where I wondered if security should be stepping in, but it was taken care of fast. I’m not certain what attendance was, but I would not be surprised if it passes 2017 – Friday and Saturday were both packed. Looking forward to 2019!

By Makoto Sanada and Kudan Naduka. Released in Japan as “Satsuriku no Tenshi” by Media Factory, serialization ongoing in the magazine Comic Gene. Released in North America by Yen Press. Translated by Ko Ransom.

I’ve mentioned before that I will sometimes dip back into a genre that I’m not fond of to see if a new series might catch my eye. With horror, this has been something of a mixed back. When it works, it works seriously well – see Higurashi or Kurosagi Corpse Delivery Service. But for each one of those there are five or six “let’s gather a cast of people together and winnow them down one by one” that leaves me cold. Angels of Death is my latest look in to the horror/survival game genre. It’s based on a game which I believe you can actually get on Steam, and has an amnesiac heroine waking up in an abandoned building, where she’s informed she has to go from floor to floor and avoid being killed. What makes Angels of Death more interesting than most others of this sort is that the cast is kept to a bare minimum, which allows us to skip piles of introduction and get right to business. And also Rachel looks a bit more interesting than most faceless game protagonists. 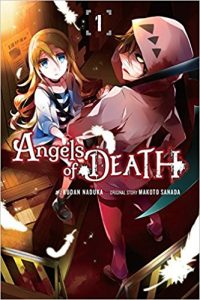 The moment we see an adorable wounded bird get brutally slaughtered in a giant two-page spread, we know the emphasis here is not going to be on friendship, training or victory. She first runs into Zack, who is an absolute cliche of a serial killer and the sort of character you’d expect to get killed off pretty quickly in this sort of series, but somehow she manages to escape him. She then ends up on a different floor with Dr. Irie… sorry, Dr. Danny, who is very much like what Dr. Irie from Higurashi would be if he was deeply sociopathic and awful. To the manga’s credit, it doesn’t bother to try to convince us that he’s really another good guy – we already know there’s a killer on each floor, and he’s already so shady that it barely raises an eyebrow when he starts going on about eyes. Eventually Zack ends up chasing Rachel once more, but Zack is now put off by her personality so allies with her to try to get out.

As I said, the odd moments when Rachel shows off how broken she is are the best in the book. They manage to combine hidden tragedy and loss with a truly scary feeling, particularly when dealing with the bird. The artist, in fact, is very good at showing off the strengths of this genre – scary scenes, over the top faces, and a lot of bloody action. On the downside, unlike, say, Higurashi or Kurosagi Corpse Delivery Service, I doubt the final goal here is to show how a team can become true friends and band together to defeat the bad guy. The goal here is to frighten and shock. This first volume does a decent job of that, and therefore if you like survival horror, I’d definitely recommend it, though I likely won’t be reading further.